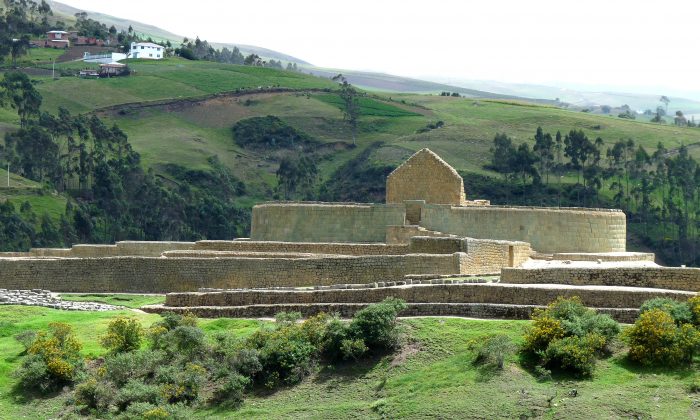 The remains of a building at Ingapirca, the largest known Inca ruins in Ecuador. Most of the structures in the Ingapirca complex were built without mortar, the stones carefully chiselled and fashioned to fit together perfectly. (Manos Angelakis)
Americas

Cuenca, Ecuador: City in the Clouds

The four-hour drive from sea level Guayaquil to Cuenca, elevation 8,300 feet, painted a variable and verdant portrait of the terrain that makes Ecuador such a winning destination.

Pouring rain followed us out of Guayaquil and battered our car as the smooth well-paved road gave way to steep torturous curves and dense fog. I marvelled at the skill of our driver who negotiated the road effortlessly, even though it was almost impossible to see clearly past the windshield.

When we finally reached the Andes—from the Quichua word “anti” which means “where the sun rises”—we rose above the fog to reveal a beautiful blue sky peppered with fluffy white clouds. The hot, humid coastal weather had given way to cool, crisp, thin air and rich vibrant vistas.

As we descended into Cuenca and proceeded toward Parque Calderon, the central square, my feeling that Cuenca was a delightful old-world Spanish colonial city was confirmed.

UNESCO declared the historical centre of Cuenca a World Heritage Site, and a stroll though the main square and surrounding streets is a walk though 450 years of history. Colonnaded buildings painted in pastel colours, cobblestone streets, red tile roofs, and decorated Cathedral cupolas outlined against the clear blue sky are hallmarks.

Meandering around the old town and randomly popping into churches, exhibits, and museums is a delightful way to enjoy the city. There are plenty of parks to rest in, restaurants to dine in, shops to spend money in, and stunning architecture to be captivated by.

Santa Ana de los Cuatro Rios de Cuenca, commonly referred to as Cuenca, is the third-largest city in Ecuador and the capital of Azuay Province. Although it was officially “founded” in 1557, Cuenca was in actuality built over the Inca city of Tomebamba, the homeland of Inca king Huayna-Cápac and the second-largest city in the Inca Empire after Cuzco in Peru.

A hundred years earlier, the Inca had conquered the Cañari Indian nation, the original inhabitants of the area, and constructed their city over the Cañari city of Guapondelig, which means “plains as vast as the sky.” Evidence suggests the area had been settled as early as 500 A.D. And no wonder, situated as it is in a beautiful valley surrounded by mountains and sporting perfect year-round weather.

Cuenca is a retiree’s paradise. Incentives include the U.S. dollar as the monetary medium of Ecuador, use of 110 voltage, and the same time zones as the U.S. In addition, English is widely spoken. Currently, expats represent only a small percentage of the population but their community is growing rapidly both in the old town and in the new neighborhoods dangling off the steep hills. This is mostly due to the favourable cost of living, availability of social services (medical and institutions of higher learning) and spectacular natural environment.

Furthermore, Cuenca is close to the Equator, so all year there is an equal 12 hours of light and darkness, spring-like temperatures averaging 70/75 degrees, and abundant sunshine. The mild rainy season ensures lush green foliage and flowers of such magnificence that they are exported all over the world. It’s not surprising then that Cuenca has attracted a large art community that adds a cultural component to the lively handicraft tradition that has existed in this valley for hundreds of years.

The traditional Ecuadorian straw hat, known as the Panama hat, became famous around the world when President Theodore Roosevelt wore one on a trip to Panama during construction of the canal in 1906. It became popularized as the Panama hat, a label that stands to this day. Hand-woven out of the straw of the toquilla plant, the hat is washed, blocked, dyed, and finished, in a labour-intensive process. There are several good producers—tours through museum workshops in Cuenca are readily available—but the backbone of production is in a flourishing countryside cottage industry.

In addition to the elegant embroidery, hand-knit sweaters, and gold or silver filigree jewelry, ceramics have been elevated to an art form and you will find finely crafted works decorating walls as frequently as paintings.

Just a short ride out of Cuenca, on a well-paved road that passes through luscious scenery, is the most significant archeological complex in Ecuador. At an altitude well above 10,000 feet lies the Inca ruin of Ingapirca. It is believed that the Inca built their complex over the earlier Cañaris Indian settlement because the circular formation is Cañaris but the stone construction of temples, buildings and pathways—along with the trademark trapezoidal windows and doors—is all Inca.

At the Temple of the Sun and Moon I allowed my imagination to run wild and could almost see the white-gowned vestal virgins, beautiful young maidens aged 11 to 22, facing the priests attired in colourful robes decorated with gold and jade jewelry.

I closed my eyes and pictured the sun bouncing off the solid gold sacred animal totems resting in niches around the walls illuminating the faces of the girls. I imagined them expressing gratitude for the blessings bestowed by the Sun God and Moon Goddess with a dance that began by linking arms and moving in a slow circle that gradually grew more frenzied until they were consumed by ecstasy.

Too many Hollywood films, you say? Well, it could have happened that way, but even if it didn’t it was an enjoyable vision and a lovely way to end our visit to Cuenca.