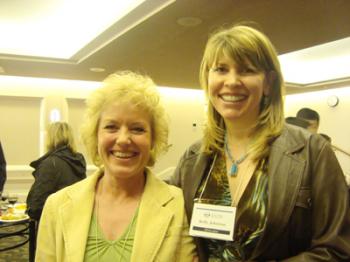 CTV Director of News and PR says ‘Come see it!’

CALGARY, Alberta—In these days of economic uncertainty, many are seeking guidance and hope to get through tough times. According to Ms. Johnston, director of news and public affairs in Calgary for one of Canada’s largest television networks, attending Shen Yun Performing Arts should be a priority for anyone needing a lift to their spirits and a little inspiration.

“I think you have to decide what your spending priorities are. But this is a gift for yourself, and this is a gift for the senses. And you can’t get that worrying about things, so sometimes there are priorities that you do need to spend the money on. So I think coming out and feeling the joy [of Shen Yun] is worth it.”

Ms. Johnston appreciated the wealth of Chinese culture and history that Shen Yun “brought to life on stage,” but noted the range and universality of the messages as well.

“The inspiration is that the stories are for everyone. They’re not just for the Chinese. … [Shen Yun has stories about] enlightenment, the difficulties, and the struggles. You see good [triumph] over evil. You see compassion and empathy, and all the things you need to do as a person in the world,” she explained.

Ms. Johnston also appreciated the emcees' bilingual explanation of the dances before each scene, allowing the audience a deeper understanding of the stories before they unfold.

“I think that visually there was just so much beauty in what we saw with the delightful dancers, the colors, the fans, the expressions. It would be very hard to pick just one [favorite scene],” she said.

But she was particularly moved by one of the modern stories in the performance entitled Heaven Awaits Us Despite Persecution. In this program a father is persecuted because of his belief in Falun Dafa, a traditional Chinese spiritual discipline. For Ms. Johnston the theme was of “a conviction, and a belief, and the oppression for that belief.”

Ms. Johnston praised the abilities of the dancers saying, “The dancing was very impressive, the choreography was amazing. [It was a] beautiful, delightful display of colour, coordination, and incredible athleticism by all the dancers. To do everything—to be able to do all the tumbling moves as well as the dances, it was great.”

She referred to the variety of difficult classical Chinese dance movements the performers are trained in, allowing them to express a wide range of styles that represent the different ethnic groups in China.

Ms. Johnston had heard about Shen Yun online and was delighted to find out that it was stopping in Calgary. She described it as “magnificient,” and said she will “absolutely be recommending it to friends.

“Come see it! That’s gotta be the only message,” she said.

The aim of Shen Yun is to revive ancient Chinese traditional culture and stories through dance and music.

Shen Yun will be traveling to Edmonton and Regina before continuing its journey around the globe.