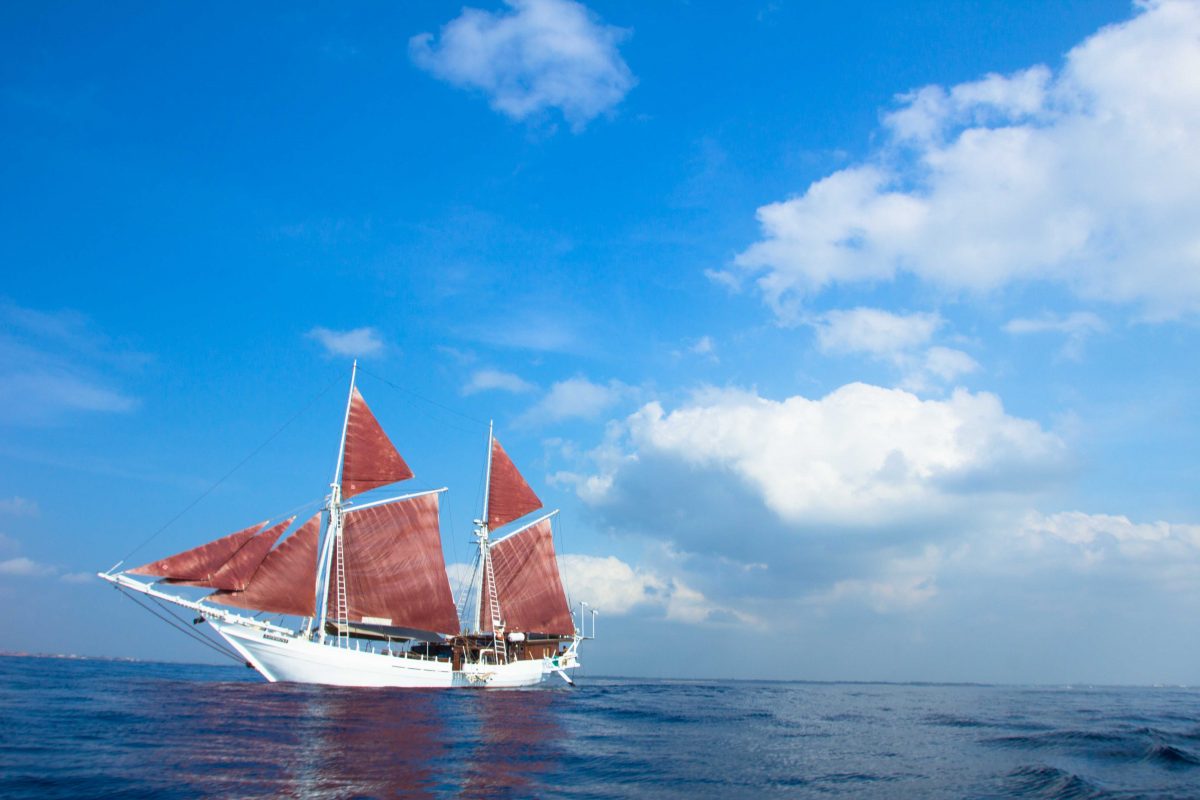 The Katharina, a traditional pinisi-style schooner that sails to islands in the Indonesian Archipelago. (Courtesy of Seatrek Sailing Adventures)
Travel

Cruises With a Difference

For many, the idea of ocean travel conjures of images of huge, overbearing cruise ships crammed with thousands of passengers, where non-stop “entertainment” and restaurants that never close are de rigueur.

This is hardly my idea of fun, let alone any way to spend a vacation. But let’s face it, cruises have developed this reputation.

The following are four boat trips that are likely to please anyone who has misgivings about taking a cruise. (It may or may not help that the boats tend to travel to exotic destinations.)

Any trip you take on the Akademik Ioffe is very likely to take place in cold waters. This boat, originally a Russian scientific expedition vessel, has been hired by Arctic and Antarctic expedition companies over the past 20 years. The crew is Russian, but the guides are English-speaking nature experts. The food comes from the many ports of call that the boat makes while repositioning from the South Pole to the North Pole.

There is nothing particularly luxurious about this boat, but its destinations make one feel pampered. That is because the Akademik Ioffe, along with its Zodiac boats, will take you to remote Arctic areas that you would normally never dream of going to. Our trip went from Greenland to Canada’s Arctic, and the boat was filled with birders from around the world who specifically wanted to visit Canada’s and Greenland’s northern regions in the hope of seeing exotic birds that rarely make their way south.

So enthusiasm was high, and along with many northern birds we saw polar bears, walruses, the odd whale, but few people. For me, the highlight was a visit to the port of Illulissat in western Greenland where the huge icebergs that make their way to Iceberg alley in Newfoundland are born. One current trip allows passengers to visit Sable Island in Nova Scotia, one of the few ways of visiting this new national park.

The Ecoventura-owned M/Y Eric, a tiny yacht built to cater to just 20 passengers, was my home during a seven-day trip through the Galapagos Islands. The ever friendly Ecuadorian crew went out of their way to make sure we took advantage of every moment we were in the Galapagos National Park and to ensure that we did not contaminate any new island from material—including sand—from the previous one.

Nature lovers had a field day, enjoying a chance see the world’s largest tortoises, naturally tame sea lions, and of course the birds. Blue-footed boobies, flightless cormorants, and the albatross on one of its few natural mating and nesting islands are some of the highlights.

You’d be forgiven if you’ve never heard of a pinisi fishing boat, as they only exist in the waters around Indonesia. One particular pinisi, the Katharina, has been fitted for passengers who can leave from Bali. Our destination was Rinca Island, a tiny uninhabited island in the Komodo Island National Park, where we were going to see the oldest living reptiles on earth—Komodo dragons.

The Katharina took us across the pristine waters of the Flores Sea, and the snorkelling along the way would be considered the best in the world. Meals were served on a table that doubled as the skylight over the main deck. There, we feasted on fresh red snapper and the freshest fruits possible, later enjoying clove kertek cigarettes.

Entering Komodo dragon territory at the end of the voyage was almost a letdown. We had to traipse around Rinca Island in stifling heat for hours before we even caught a glimpse of the dragons. Some were massive, while some were like tiny lizards. Our local guide carried a pointed, forked stick, ready to defend us against all possible danger.

The best way to see Cuba? In a nutshell, on a boat owned by Greece-based Celestyal Cruises.

Cuba is a lot bigger than most people imagine, and you could spend days just getting around it if, say, your goal was to visit some of its main port cities. Celestyal Cruises has solved this problem, as the Celestyal Crystal steams ahead at night while you get some sleep and recharge your energy for the next Cuban port of call. Since the boat is in Cuban waters, many of the crew members are Cuban and live entertainment of the musical kind is first rate, given that most of the musicians are also Cuban.

Of the four ships, the Crystal is the only one that resembles your typical cruise ship. Guests were from around the world. Each new port, from Havana, to Trinidad, to Santiago de Cuba, could be explored on one’s own or with a guide.

Another advantage is the food; Cuba has a less-than-enviable reputation when it comes to food, but on this boat, the food is of the standard you’d expect on a cruise.