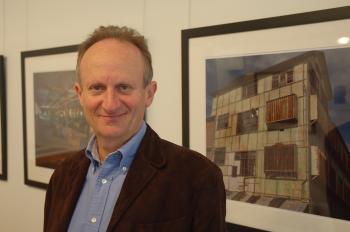 Mark Tedeschi QC with some of the works from his current exhibition 'Still life, no fruit'. (The Epoch Times)
Arts & Culture

By James Burke
Print
Mark Tedeschi QC has witnessed human behaviour at its extremes. As NSW's senior crown prosecutor and many years work in the NSW criminal justice system, he has been offered insights into the human condition – something that he has attempted to capture via his photography.

“My work in criminal law has given me an exposure to life that the ordinary person wouldn’t have,” Mr Tedeschi told The Epoch Times.

“I believe that many people are capable of committing gross crimes under the wrong sort of pressures.

“I think this has made me acutely aware of people’s underlying emotions because, if you are going to run a prosecution, it really helps to understand people’s emotional make up and what has prompted them to do something—so it has made me much more aware of, in terms of my photography, in capturing the expression of human emotions.”

One of Mr Tedeschi’s earliest exhibitions was as a result of his 1988 – 1992 visits to The Block, the symbolic home of Sydney's indigenous community.

“I felt there was an incredible vibrancy on the street and so I went back many, many times,” he said. “At first I got a lot of suspicion: ‘Are you with the police? Why are you taking photographs?’ I had to explain myself to people—but I’d come back and give people prints of their images and they loved that—and I got some amazing images.”

While The Block images are presently held in the Museum of Sydney and the NSW State Library, Mr Tedeschi hopes they will soon be exhibited again to bring attention to what he describes as the debate about rebuilding residential accommodation for indigenous people in the area.

While another exhibition, held last year at the Justice and Police Museum, cheekily revealed the hidden passions of a number of Sydney’s top legal professionals, his portraitures of 40 Australians who survived the Holocaust, and those who helped save them, were his biggest commission and his most poignant series.

Taken in the early 1990s and commissioned by the Sydney Jewish Museum, his Holocaust images continue to be part of a travelling exhibition to schools across rural Australia.

“Thousand of school children have seen it—teaching them about tolerance, ethnic differences, and about the consequences of persecution of any ethnic group,” Mr Tedeschi said.

Most of Mr Tedeschi’s work focuses on people, but his most recent exhibition, Still life, no fruit, currently at Double Bay’s Frances Keevil Gallery, is people-free and deals with his fascination of well-weathered and decayed buildings and objects.

Mr Tedeschi said the next exhibition to follow will be a collection focusing on people expressing unusual emotions which he described as unrepeatable moments.