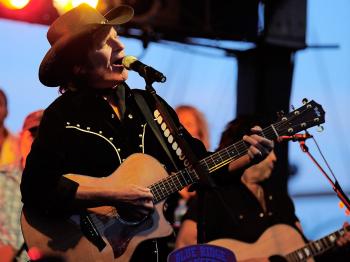 Ian Ritz
View profile
Follow
biggersmaller
Print
NEW YORK—The crowd gathered early and John Fogerty started late in typical rock star fashion. The music flowed into the air as the sun set over the water at pier 17 in lower Manhattan. With ships rocking slowly in the distance, Fogerty started off his set with a surprise cover of “When Will I Be Loved?” originally written by the Everly Brothers in 1960.

After one of his new country songs, Fogerty set down his acoustic guitar and picked up his electric to play the anthem “Born on the Bayou,” one of CCR’s many hits from their long and successful career that peaked in the early 1970s.

CCR has sold over 26 million records in the United States alone. That’s quite a feat for a high school garage band that started playing in Berkley, California in 1958. The band split in 1972 due to internal strife, and Fogerty then set out on his long and bumpy solo career. Due to decades of steady radio play, CCR was officially inducted into Cleveland’s Rock and Roll Hall of Fame in 1993. Some of their classic hits, all written by Fogerty include “Have You Ever Seen the Rain,” “Down on the Corner,” and “Proud Mary,” which would later be covered by icons Tina Turner and Elvis Presley.

Fogerty’s newer material is melodic with a strong country feel, delivered with his signature raspy voice shining through. The new tunes were well received, though the audience clearly preferred the CCR classics, singing along and making song-requests during the breaks in between songs.

Among the audience was Scott Willis from New Jersey who was impressed with the performance. “It was great! It was fantastic. I had a great time … free show, and I am a big fan of John Fogerty, Creedence, the whole kit and caboodle.”

The sound-quality, the setting, and the pleasant weather combined for a near-perfect music experience. Fogerty proved that after almost 50 years, he can still mesmerize an audience.