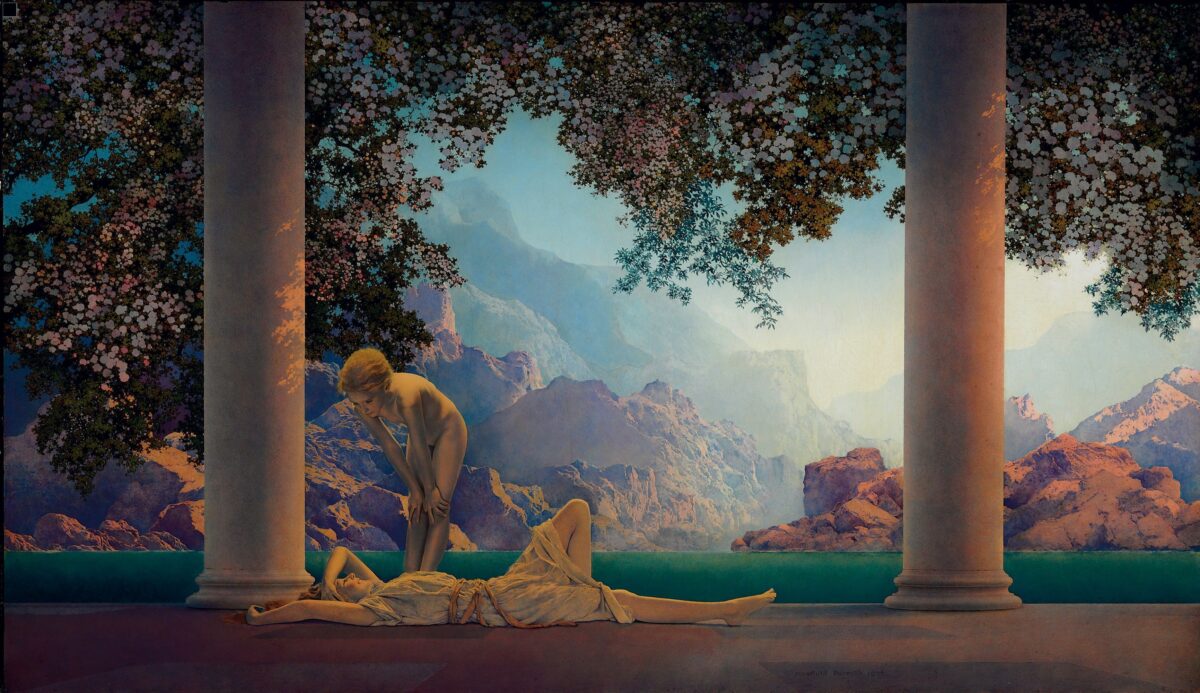 Parrish’s most well-known print, “Daybreak,” sold enough reproductions to have been in one out of every five American households in 1925. "Daybreak," circa 1922, by Maxfield Parrish. (Public Domain)
Arts & Tradition

“There seem to be magic days once in a while, with some rare quality of light that hold a body spellbound.”—Maxfield Parrish

The art of Maxfield Parrish was enjoyed by millions in his lifetime, thanks to 20th-century innovations in color printing and mass distribution. Parrish became a household name as he gained widespread success for his iconic neoclassical prints, children’s book illustrations, advertisements, and covers of popular periodicals, including Life and Harper’s Bazaar.

At the time, prolific illustrators and commercial artists enjoyed the status of celebrities. As a result of his work’s popularity, Parrish’s most well-known print, “Daybreak,” sold enough reproductions to have been in one out of every five American households in 1925.

Following this trend, “Daybreak” went on to be the most popular print of the entire 20th century. “Parrish Blue,” a shade of Cobalt Blue, was named in honor of the saturated, surreal color that is a signature characteristic of many of Parrish’s paintings.

The success of his artistic career enabled him to build “The Oaks” for his family—a homestead that became Parrish’s personal, creative kingdom for nearly seven decades of his adult life.

Maxfield Parrish was born the son of artist Stephen Parrish on July 25, 1870. At the time of his birth, Parrish’s father was already respected in Philadelphia for his etchings of local landscapes. As the son of an established artist, young Frederick (who later adopted his grandmother’s maiden name Maxfield) learned to sketch alongside his father. He was encouraged to develop his artistic talent on a lengthy family trip to Europe at age 14. There, he had the chance to view the works of the old masters in person and began his formal studies at an art school in Paris. Back in the States, Parrish studied architecture at Haverford College, followed by fine art at Pennsylvania College of the Arts.

Parrish’s close relationship with his father led them to share a studio in Massachusetts after he graduated. A few years later, he followed his father to the Cornish Art Colony, located in the towns of Plainfield and Cornish in New Hampshire. Many artists, writers, and performers lived and gathered in the area.

Parrish bought land and built a small house across the river from his father on a property he named “The Oaks.” Magnificent oak trees stood on the property, including some of the largest in New Hampshire at that time.

Having studied architecture, Parrish designed the house and built it with the help of carpenter George S. Ruggles, a nearby neighbor. The house began modestly with two bedrooms in 1898, and it expanded over the years to include 15 rooms and five bathrooms. Parrish went on to have four children with his wife, art instructor Lydia Austin. Finding it hard to focus in the main house, Parrish built a studio, which grew to house eight more rooms, including a photographic darkroom and a well-equipped machine shop.

The ‘Mechanic Who Paints’

Parrish produced nearly 900 works of art in his prolific career. From his home studio in New Hampshire, he created paintings that transported both children and adults to a mystical, neoclassical world. From “Poems of Childhood” to “The Arabian Nights,” his imaginative paintings helped make works of fiction more real for readers. He created images bursting with saturated colors, contrasting areas of warm and cool to add dimension to his larger-than-life world of spirited characters.

In true storybook fashion, Parrish’s characters ranged from the young and beautiful to the weathered and grotesque, all created with an endearing quality and executed with skilled originality. However, he was catapulted to stardom primarily by images that featured figures of youthful innocence surrounded by dramatically beautiful scenery.

Parrish was particularly sought after for his portraits of women perched in epic natural settings. In 1931, 61-year-old Parrish announced to the Associated Press, “I’m done with girls on rocks! I’ve painted them for thirteen years and I could paint them and sell them for thirteen more. That’s the peril of the commercial art game. It tempts a man to repeat himself. It’s an awful thing to get to be a rubber stamp. I’m quitting my rut now while I’m still able.” He decided to focus largely on landscapes from that point on.

Parrish used a painting process which he described as “very simple, very ancient, and very laborious” to create his vividly colorful and ethereal works. Starting with a monochrome underpainting, he would then layer transparent glazes of color with varnish between each color layer. Each layer would dry for 10 to 14 days before the next layer would be applied. Through this process, he felt he achieved the luminously brilliant color that he argued wouldn’t have been possible through traditional mixing of colors.

Due to the lengthy drying process of this painting method, Parrish would work on multiple art projects simultaneously. Unsatisfied with painting alone, this self-professed “mechanic who paints” also needed time to spend on his other creative endeavors, which included making models, furniture, vases, and more.

A modern Renaissance man, Parrish used his machine shop to build models which he would light and photograph as reference for his paintings. He photographed local models, including his own children as well as their nanny (and his muse) Susan Lewin.

Parrish also employed the technique of using a projector to transfer his photographic negatives onto tracing paper. This allowed him to adjust the image size to get accurate dimensions and create geometric relationships in accordance with theories he followed about symmetry and the golden ratio. Many of Parrish’s works are framed by columns and other neoclassical architectural features that assist in building these proportional relationships.

In 1914, Parrish was asked to design a monumental, 15-by-49-foot mural for the lobby of the Curtis Publishing Company building in Philadelphia. At the time, he was already years into a separate commission by publisher Cyrus Curtis for 18 tall panels to be exhibited in the same building. “The Dream Garden” was a much larger entrance centerpiece that was to be a first, and only, collaboration between Maxfield Parrish and Louis Comfort Tiffany.

From Parrish’s design, Tiffany constructed the mural using over 100,000 pieces of iridescent Favrile glass that altogether weighed over four tons. The glass fragments are a composition of over 260 different color tones, which together form a surreal and immensely beautiful scene from nature. The mural is surrounded by white marble and has a small fountain pool in front, adding to the illusion of a neoclassical structure opening upon a vast natural scene.

The mural was first displayed at Tiffany Studios in New York, where it was very well received by critics. It was then dismantled and took six months to install at the Curtis building in Philadelphia. While the two perfectionist artists were not especially happy with each other’s execution of the work, it became a highly sought-after piece for the remainder of the 20th century until the city of Philadelphia designated it a “historic object” that could not be removed.

The designation occurred after the mural was temporarily sold to casino owner Steve Wynn in 1998. The plan to move the famous mosaic to Las Vegas was protested by art historians and activists. The Pew Charitable Trusts provided $3.5 million to the Pennsylvania Academy of Fine Arts to purchase the work and maintain its installation in the historic Curtis building’s lobby.

Maxfield Parrish lived at “The Oaks” for the rest of his life. He painted well into his late 80s until his arthritis prevented him. He passed away at age 95 on March 30, 1966, at a time when his work was again experiencing an influential resurgence in America.