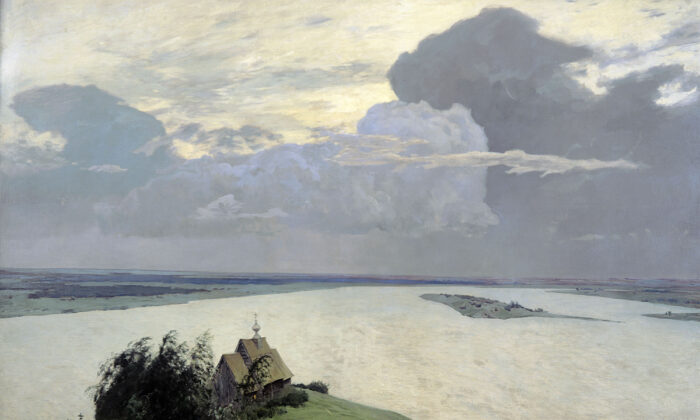 Autumn in America is a fine time to contemplate change and the unchanging. The moody month of October ushers in colorful leaves, clear skies, and crisp breezes. Early evenings give way to scampering feet and wildly costumed kids in the frightful pursuit of candy! It’s almost Halloween.

This time of year scary stories lure us in, and they can be captivating. Is it the heart-palpitating effect? Perhaps it’s the intrigue of a spirit world just beyond our immediate detection, or simply the age-old struggle between malevolence and righteousness that resonates. Whatever the reason, what better way to prepare for Halloween than by revisiting one of the most spectacular spooky classics of the English language, “Dracula.”

Bram Stoker’s 1897 novel “Dracula” is one of the first and best of all vampire tales. The story unfolds through journal entries from a group of English men and women, one American hunter, and the Dutch professor Abraham Van Helsing. Stoker introduces brave and insightful characters, especially Mina and Jonathan Harker, Dr. Seward, and Dr. Van Helsing. Among them, the old stalwart, Van Helsing, might just be the best. Precise in his mental processes, he’s a careful scientist, a skilled doctor, and both a gifted psychology instructor and student of life. He is a man of the times and for all times. Plus, he battles vampires. I love Van Helsing because he fights the good fight. At the end of the day, the story of “Dracula” is a portrayal of the eternal clash between good and evil, light and darkness.

The classic novel naturally conjures vivid imagery. Printed and reprinted over the years, sometimes one sees on the book’s cover a portrait of Vlad the Impaler, a spooky graveyard scene, or a pale-faced monster. Yet in my estimation, frightening pictures are too limited in scope for the broad perspective of this work.

If I were to assign a visual guide to the opening and closing of this story, it might be Isaac Levitan’s “Above the Eternal Tranquility.” This glorious work of oil on canvas was created by Levitan in 1894, three years before Stoker finished writing “Dracula.” The painting appears to have been made from the vantage of a cliff high above the outcropping, which overlooks a shimmering lake at dawn or dusk.

Levitan’s painting offers a stirring perspective on the architecture of humanity as compared with the vastness of creation. A small cemetery marks the placement of human souls who’ve met their limits. There, the Creator is remembered in a little church. “Above the Eternal Tranquility’” is a profoundly human work, about mortality and eternity. It soars with quiet hope—the hope that is intrinsically embedded in all beauty and points toward forever.

Isaac Levitan, the grandson of a rabbi, was born in a part of the Russian Empire that is modern-day Lithuania. The spot is nearly straight north of Romania, where Castle Dracula is set. Despite having great talent, the artist spent part of his life in poverty after his mother died and his father fell ill during his teenage years. Levitan’s father soon died, too. Levitan never married and never had children. Succumbing to a fatal heart condition himself, he lived fewer than 40 years. Perhaps it was the perception of his own mortality that led Levitan to contemplate the beyond with an extraordinary sensitivity to beauty. He is survived by a profound body of landscapes.

Levitan, a Russian Jew, and Stoker, a Protestant Irishman, were European contemporaries of one another. They were realist artists looking over a precipice toward rapid change in the sciences, humanities, religion, and lifestyle. In their time, the beautiful, the true, and the good were still valued, but much was coming into question. And, human progress isn’t always pyramidal, particularly in art.

Today, schools boast of STEM (Science, Technology, Engineering, and Math) accreditations, which have a fine place, but can’t represent a complete education in the absence of broader human understanding. Ethics, philosophy, art, religion, and other studies in the humanities formerly recognized as essential, are virtually unknown to many young people now.

“Ah, it is the fault of our science that it wants to explain all; and if it explain not, then it says there is nothing to explain.” Stoker attributed those lines to the character Van Helsing as he pursued the perplexity of evil. There’s more to life than what men can know and explain through science and technology. Whether we view life through the naked eye, screens, or modern telescopes, the fact remains, humankind sees better when it admits it can’t see all.

“We shall have an open mind, and not let a little bit of truth check the rush of a big truth, like a small rock does a railway truck. We get the small truth first. Good! We keep him, and value him; but all the same, we must not let him think himself all the truth in the universe,” says Van Helsing.

In “Dracula,” Van Helsing and companions pursue the truth with authentic open-mindedness. They use the new science and tech at their disposal to struggle against a terrible foe, but they don’t limit themselves to the simple tools of science. Blood transfusions, recorders, typewriters, and trains were modern developments at the time. They were good tools but the most important turned out to be courage, will, heart, faith, hope, and love.

Modern man is often tempted to consider himself more advanced than those who came before. If tech were the measure of supremacy, perhaps it would be true. We are surrounded by it, engrossed by it. How many times have you hung out with family or noticed a group of young friends sharing a bite, with all eyes cast down into phones?

Historically, the ritual of breaking bread and conversations at mealtime have connected people in meaningful ways. Recently, my family and I were out to a favorite dinner, sushi. As we dined, an adorable 2-year-old was seated beside her mom and a friend. The tiny girl was absorbed in an iPad. After an hour or so, when we were ready to leave, the tot shyly lifted her eyes and began to wave. Responding to the child for the first time in our observation, the girl’s mom wordlessly plugged a cord into the computer and placed a headset over her toddler’s ears. The child began to struggle and cry but finally dropped her eyes to the screen and ceased to wave. Our 4-year-old lamented, “We didn’t even get to say hi.” The other toddler simply resigned to a virtual solitary confinement.

As long as human beings remain human, they must participate in the humanities. Every time we make moral judgments, create art, music, even law, it’s a humanities-based exercise. However advanced our science or fancy our technology, we need the humanities as well as real flesh and blood connections. They keep us well.

In Stoker’s story, Dracula is pursued by the Harkers, Van Helsing, and companions. Though science fails to explain the evil before them, they finally discern what the creature is: a monster who feeds on the lifeblood of others to perpetuate his worldly existence. While vampires may lack concrete reality, they remain a powerful metaphor for the evil that possesses the hearts of men who sacrifice the wellness of others for earthly gain. The struggle between good and evil is as timeless as it’s ever been. While evil attempts to suck the life out of humanity, holy people sacrifice all but their souls for the sake of that which is above.

Mankind has ever been tempted by the belief that the material here and now is all that matters. But really, there’s much to be learned from the wisdom of those who lived, learned, and struggled before us. It’s foolish to reduce what is beyond ourselves to the limitations of our own invention.

In the end, it was not the Winchester that did Dracula in, but faith, courage, and hearts inclined toward eternal tranquility.

Andrea Nutt Falce
Follow
Andrea Nutt Falce is a happy wife and mother of four. She is also a Florentine-trained classical realist artist and author of the children’s book, “It’s a Jungle Out There.” Her work can be found at AndreaNutt.com