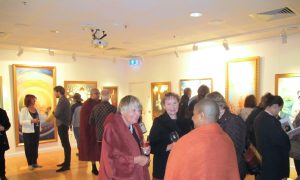 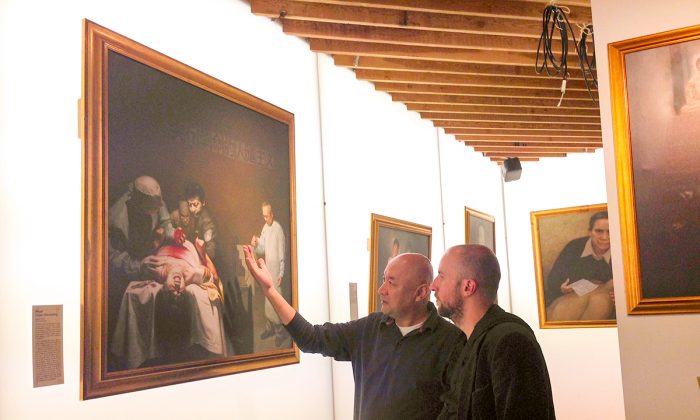 Enver Tohti (left), a former cancer surgeon in China, stands in front of the painting “Illegal Organ Harvesting” on the opening night of the Art of Zhen Shan Ren International art exhibition at the Proud Archivist, London, on Sept. 1, 2015. (Xiaomin Pang)
Arts & Culture

LONDON—A prisoner of conscience sits, serene, with a sense of courage. Despite intense persecution, he has not lost his inner-strength.

A surgeon stands still, next to the victim. He is taking part in forcible organ harvesting. He has a moment of realisation.

This literal painting called “Illegal Organ Harvesting” stood out to George Major, the Pearly King of Peckham, who opened the Art of Zhen Shan Ren international exhibition at the Proud Archivist gallery in East London on September 1.

“It makes you feel that you want to stop it,” said the 78-year-old Londoner. “I can’t cry but my heart cries for them.”

All the artists in the exhibition are practitioners of Falun Gong, a spiritual practice that has been persecuted in China since 1999. Through realist painting, each scene captures in vivid detail a moment in a story that is still ongoing.

While some paintings show the serenity of the traditional meditative practice, others depict the persecution of Falun Gong practitioners – a harsh reality that some of the artists have experienced first-hand in China.

For Enver Tohti, a Uyghur, “Illegal Organ Harvesting” brought back a deep-rooted sense of reality.

Tohti drives the 168 and the 265 bus in East London. Back in China, he used to be a cancer surgeon. It was his first time seeing the paintings.

He spoke at the opening night, recalling an event that is still fresh in his mind today. It was a morning in 1995 when he was asked to perform surgery outside the theatre.

“You don’t have a schedule today, please wait at the gate of the hospital at 9 a.m.,” he was told.

Under the chief surgeon’s orders he drove for about 40 minutes with two assistants and an anaesthetist. They had arrived at the Western Mountain execution grounds.

The chief surgeon said, “When you hear a gun shot, come in.”

They drove over the hill and Tohti saw that every 6 to 10 metres there was a corpse. He was told to go to the right one, the last one.

The chief surgeon said, “Take his liver and kidney as quick as you can, you have 30 minutes.”

Afterwards he was told by the chief surgeon: “Now go home, nothing happened today.”

He felt that the victim was not dead during surgery. Investigators have found that victims are often given a non-lethal gunshot, so that body is still functioning when taking out the organs.

At an event in parliament in 2005, Tohti spoke about his experiences.

“The UK needs to stop organ tourism and have no involvement with the Chinese market, just like Israel, Taiwan, and Spain,” said Guttman during the exhibition.

“This is the destruction of lives.”

Researchers, including Guttman, have found that prisoners of conscience, particularly Falun Gong practitioners, have been targeted for organ harvesting – without their consent and while they are still alive, albeit shocked by a gunshot. The Chinese regime knows that Falun Gong practitioners abstain from drinking and smoking, so they have healthy organs.

Mei Ying Song, a practitioner of Falun Gong, was imprisoned in a forced labour camp for her belief from 2010 to 2012.

“They took my blood test in the prison every six months,” she said.

As a prisoner of conscience Song was treated as a potential donor; if required her organs could have been forcibly removed.

Her personal experiences are similar to those of the artists who went through persecution in China.

“I sat on a small plastic stool for 18–20 hours every day, they didn’t let me wash my clothes or shower, and I had 1 or 2 minutes to brush my teeth,” she said. “And my lawyer’s licence was cancelled.”

The painting “Tiger Bench” shows a man imprisoned; in contrast to the officer torturing him, he looks peaceful.

It’s a painting that Kelly Hammond, a photographer based in Shoreditch, was particularly struck by.

“Each picture is telling a story,” she said. “They are very literal. There’s a meaning beyond the art work.”