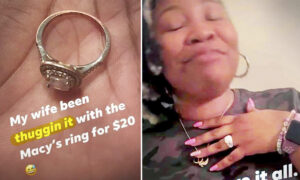 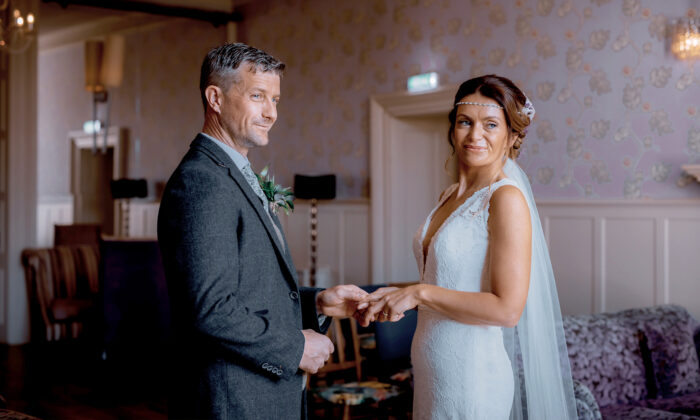 A man has married his childhood sweetheart after 22 years apart. He proposed with the same engagement ring he gave her when they were 15.

Helen Marshall, 41, and Graeme Richardson, 42, from Wasdale, Cumbria, England, met in school and admired each other from across the corridors before they fell head over heels in young love as teens.

Graeme was popular with the girls, and the boys all liked Helen, but neither of them plucked up the courage to ask each other for a date.

However, one lucky day, a friend of Helen’s promised her a chocolate bar if she dared to ask Graeme out.

“I was really blown away when she asked me out,” Graeme said.

Romance blossomed from day one and grew into true love as they walked in the Lake District and sat by picturesque waters. After nine months of romantic walks, school discos, and sneaking for a kiss round the back of the bike sheds, young Graeme got down on one knee and proposed.

Graeme worked hard on weekends for 3 pounds (approx. US$4.25) an hour to buy Helen a diamond engagement ring.

“I’d seen it in the shop window of Goldsmiths in Penrith and I knew I wanted to buy it for Helen,” Graeme said. “I worked really hard to save up for it.

“It was a substantial amount of money, but I can’t remember exactly how much now.”

Graeme’s friend thought at that time that he was crazy to do that, but Graeme was so in love with Helen that he just went ahead.

However, their parents were worried that the two of them were too young.

Graeme was 16 when he went to college in Penrith, 50 miles away, in 1994. He tried to keep contact by walking the 30-minute round trip to the phone box, but Helen was often out or doing homework when he called. Helen wrote him letters but they never arrived, and coupled with family who felt the lovers were too young to marry, they drifted apart.

Helen kept the ring, wearing it for years before tucking it away in a jewelry box. She had also bought Graeme an engagement ring but, unfortunately, it disappeared along with the letters.

Just like in the movie “The Notebook,” their letters proclaiming their lost love never reached each other, and they got on with their lives separately.

Both chose to raise their families in their childhood hometown, and Graeme said he used to slow down every time he drove past Helen. The two even caught glimpses of each other at sports days in the school that all their children attended.

“We used to see each other at our children’s school,” Helen recalled. “We couldn’t talk to each other or make eye contact.”

Throughout those years, they went separately to the bench by the boathouse that had been their special place when they were together. Helen would sob, and Graeme sat in reflection, neither of them aware that the other was also mourning the loss of their relationship.

However, both harbored a secret hope that their soul mate would appear while they were there.

“We lived three miles from each other,” said Helen. “I went away for a few years, but no more than five.”

Graeme and his partner split up in 2015, and Helen’s marriage ended in 2016. Eventually, Helen contacted Graeme on Facebook, hoping for a friendship initially.

“I was so excited when Helen messaged me,” Graeme said.

The two then met for walks, and in one walk they kissed each other. Not long after, the walks became more frequent, and neither can pinpoint the time when their new relationship formally began, but both say it felt like a perfect fit.

Graeme proposed to Helen, for the second time, by writing the question in the sand of a Croatian beach on a holiday in 2018.

“It was such a beautiful moment,” Helen said.

They eloped, only telling their close family the day before getting married on April 17, 2021. “I told my two older girls the day before, and he told his two children, but otherwise only my parents knew,” Helen said.

The only guests at the wedding were Helen’s parents, Marilyn, 68, and Clark, 66, and they celebrated with burgers and champagne.

“I feel like the luckiest woman alive,” Helen said. “I really do.”

“I just feel so proud to have her,” he said. “Like I’ve really achieved something big.”

“We’re the other half of each other,” Helen, who now lives with Graeme on the family farm, said. “He’s my soul mate, and I’m his.

“It’s a true happy love story,” Helen concluded, while Graeme added: “It just feels like the right ending … Now that we’re married all the difficulty and sorrow has disappeared.”

Graeme’s friends are amazed at seeing him happy and content now.