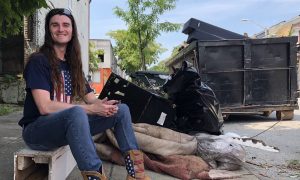 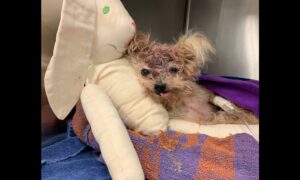 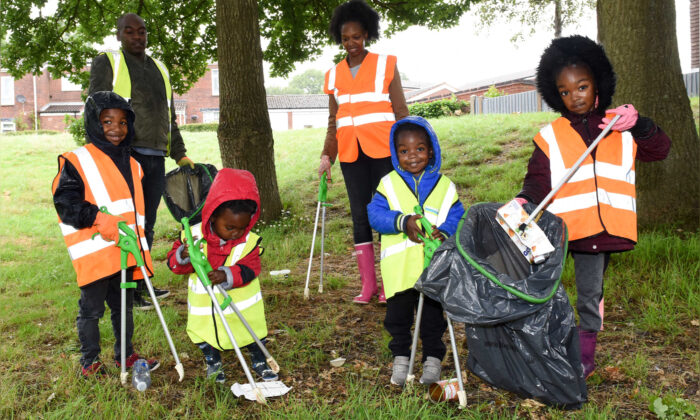 In an effort to teach their children about responsibility and the importance of looking after the environment, a couple from the United Kingdom takes their kids along with them to pick up other people’s litter.

Birmingham parents Simone and Mark Roberts stroll down the streets of their neighborhood every week along with their children in hi-vis tabards, armed with litter-picking sticks and bin bags in their hands.

“We have always been conscious anyway,” Simone, a stay-at-home mom, told Caters News. “We don’t drop litter but as we became more aware the area was infamous for dropping litter, we felt like we needed to do something about it.” So two years ago, the parents decided to introduce the activity of litter picking to their children: Rosci, 7, Taurel, 6, Kenzi, 4, and Nile, 2.

Upon witnessing firsthand how much the children enjoyed the task, Mark and Simone decided to make it a weekly activity where they visit different locations in the area to pick up trash.

In a way to make the task more enjoyable, the parents have found interesting ways to keep their children engaged while at the same time help inculcate into them the concept of giving back to the community.

One such approach, Mark shared, is that they turn litter picking into a game where the children are challenged with “how many bits of litter you can pick or who can find the biggest piece of litter.”

“Children are naturally competitive, for them is a game, they enjoy running around looking for litter and they know it’s good for the environment,” Mark, a professional photographer and videographer, said. “It’s also our way of teaching them about responsibility and looking after their community.”

Mark believes that if his children can learn that even picking up small bits of litter can help the community at large, it can inspire others to follow their lead in doing the same thing,  and thus they will be in the process of “changing the world.”

Simone too echoes the same sentiment as her husband and admits that having children involved in it not only helps them learn about giving back to the environment but also that small changes such as these can make a huge difference in the world around them.

The Roberts family prefers to stroll around the area during peak teams, especially when shops are open or when children are exiting school so that more people can witness what they do and probably be inspired to follow their example.

The positive impact of keeping the environment clean is clearly reflected in Simone and Mark’s kids. Simone revealed that her children are taught not to drop litter, and if it is accidental, they will immediately pick it up and throw the waste in the bin. However, in the case that there are no bins around, the children make sure to give the waste to their parents.

[“As] they are conscious of that as well,” Simone explains, “They started noticing rubbish on the ground whenever we’d go on a bike ride so we thought it’d be a good idea to introduce them to litter picking.”

“We incorporated bike riding as well so we call it ‘pick and ride’—we would balance riding our bikes and pick litter at the same time,” Simone added.

With this approach, they felt that their children could enjoy picking up litter more and it wouldn’t become a chore, which could be boring to them.

Additionally, the parents educate their kids that those who drop litter aren’t “horrible” or they want other people to do more work on their behalf; rather, it stems from them being unaware of the damage it can cause to the environment.

“If we educate the adults they will be teaching their children as well,” Simone said.

However, the couple revealed that some parents think that it’s a “strange activity” and that it’s not children’s responsibility to pick up other people’s litter and feel that encouraging their kids to keep the environment clean and not throw trash around is itself enough.

Meanwhile, there are other parents who actively support the Roberts family and are curious to know where they bought their cleaning equipment from and if they can join the activity during school holidays.

Regardless of the divided opinion from the community, this family is not going to stop going around and picking up other people’s litter anytime soon, as their kids really enjoy the activity.

Their plan for the future is to establish “Litter pickers on tour,” where they can visit schools and teach people more ways to keep the environment clean.