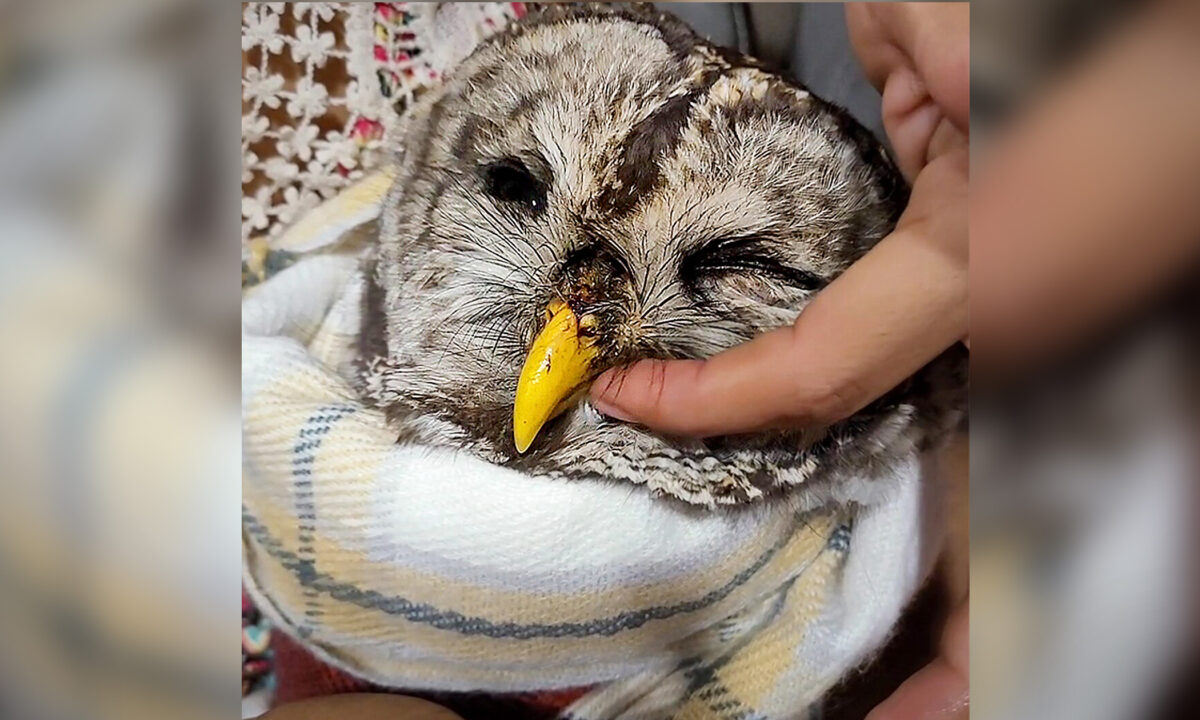 Spotting a wild owl injured on the side of a country road near their ranch, a Georgia couple driving by knew they had to turn around.

Little did they know the encounter would form a lasting friendship with the feathered apex predator—whom they would name Ko-Ko.

“It’s not normal to see an animal just sitting on the side of the road,” said Joshua Brown, 33, a medically retired Army deep-sea diver who, with his wife, Lesdy, 27, now runs an off-the-grid cattle ranch near Augusta.

They video recorded the encounter: approaching the grounded bird that had been hit by a car, the owl staring at them helplessly. They saw blood on his beak.

“If it weren’t for how in tune with nature we’ve had to be, I wouldn’t have felt so confident,” Joshua told The Epoch Times.

They were able to take him home and started building a bond of trust with him, he said, explaining how their soothing voices noticeably put Ko-Ko at ease.

Joshua knew if Ko-Ko’s wings were damaged, it would seriously impact his ability to hunt and survive in the wild. Upon inspection, they found that the wings were intact.

They tended to the wound on his beak and also suspected an injury to his hip.

Documenting their experience, the couple video recorded their interactions with Ko-Ko: Lesdy applying ointment to his beak and Joshua ever so gently wrapping him in a blanket bundle.

“Every day was honestly a brand-new experience with Ko-ko. We never really knew what to expect from him,” Joshua said.

They kept talking to him and were able to approach him to pet his head, eventually coaxing him to perch on Lesdy’s jacketed arm. “The caresses and soothing tone seemed to instantly hit home for him,” said Joshua, adding that they started noticing increasing natural instincts emerge in Ko-Ko as his health improved.

“As you gain more strength and full body control, he started being more vocal and taking longer to calm down and reset,” Joshua said.

The owl started making clicks, snaps, hisses, and even growls during their interactions.

“Day three of handling and feeding Ko-Ko became difficult during swaddling and [he] actually got loose,” said Joshua, adding that he “went into attack mode” while they were unwrapping him.

Thankfully, no one got hurt.

The couple redoubled their efforts to build trust with the bird—until it was finally time to try to release him, which they facilitated by building a nesting box for him. They placed it in the house first, to make him feel at ease.

The couple’s property, called Bandita Ranch, was near where they found Ko-ko by the side of the road, fortunately, so releasing him outside their home wouldn’t prove difficult for him to find his way back.

They recorded the moment of Ko-Ko’s release in front of his home setup, facing the woodline.

“He melted our hearts when he flew around up to the tree where we had placed his home,” Joshua told the newspaper. That night, he stayed in that tree and watched his new terrain.

“These moments are always bittersweet,” he added. “We loved seeing him feeling better and stronger, but man was it a hard truth to face: remembering Ko-Ko is meant for the wild.”

But the owl remembered the two humans who cared for him, and the next morning, they woke to see him staring at them from the tree outside their bedroom window.

He spent the whole day perched, watching them.

“Seeing Ko-Ko progressively change and improve under our care, and then seeing him flying up to the tallest trees, was all we could have asked for,” Joshua said, adding that their journey with the owl taught them to “have the confidence to go into a scary situation.”

“And to keep trusting we’re in what I love doing most, helping and being around nature,” he added.