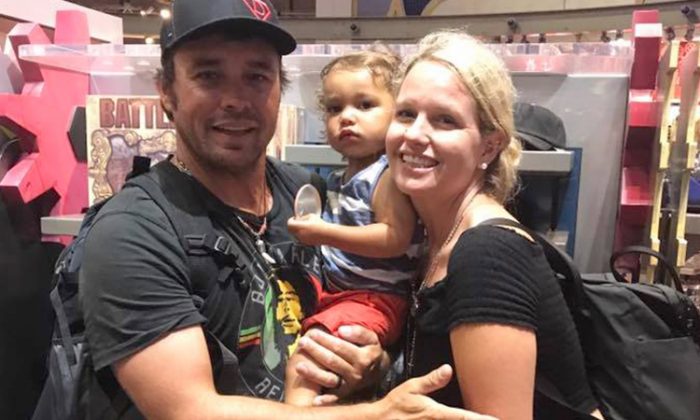 Parents often have to stay wary of strangers who approach their young children. But for a couple in Texas, they didn’t mind when two strangers took their son on a shopping spree after the strangers told them a heartbreaking story.

In July 2017, Taylor Fisher, her husband, Chris, and their son, Oliver, went to Disney World in Florida. After having dinner at EPCOT’s World Showcase, the family decided to walk around the various pavilions and take some photos.

When they were at the France pavilion, a couple “stopped to take our picture in front of the Eiffel Tower,” Fisher wrote on her Facebook page.

As Oliver was young, he wasn’t being cooperative in taking a picture, but the couple was “very patient.”

After helping Taylor take a “decent” photo, both families parted ways. However, a few minutes later, the man came back with tears in his eyes.

“He promised he wasn’t creepy and introduced himself as Scott and his wife as Sally,” Taylor recalled.

Scott then proceeded to tell them a heartbreaking story.

“Through broken tears, he went on to tell us they had four beautiful children, 3 of whom were in the park with their grandparents, while the fourth was spending his first birthday in heaven,” Taylor recounted.

The couple’s baby, Duke, had passed away a few months before his birthday, which was on July 1, and seeing Oliver reminded them of their son.

“As a parent, and looking back on the moment, you would never think to just give your child over to perfect strangers but in that moment I was so overwhelmed with peace, a peace that only God can provide, that I handed my little boy over and watched as he held the hands of these two people whom my heart suddenly felt so connected with,” Fisher explained, adding that she and Chris followed behind.

As Scott and Sally bought the toys that Oliver wanted, Taylor and Chris saw how they began “to heal from the grief and ache of loosing [sic] something so dear.”

The two couples stopped in the middle of the store to pray together after Scott and Sally had bought the toys.

Before parting ways, Sally told Taylor that they had prayed for closure and “tonight was her gift from God.”

One year later, the two families are still in touch.

“We are blessed to now call each other family,” Taylor wrote on her Facebook.

What an inspiring and touching moment.