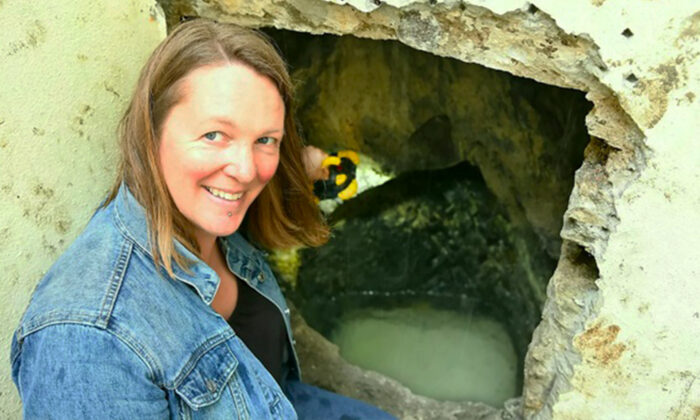 A couple renovating their dream home discovered a secret well stashed with Victorian artifacts hidden behind a wall.

Alice and Ben Crawford, of Plymouth, Devon, were shocked to discover that their new house came with a secret chamber and a mini hoard of treasure. The pair moved into the Georgian property in 2018 and soon discovered wet rot in the basement.

Then in late 2019, they dug up their enclosed courtyard and were stunned to discover the source of it was a historic well—filled not only with water but with a little trove of Victorian artifacts.

In September 2019, Alice, 44, said: “It probably was the original well for the house, the house is Georgian so it’s probably before the water was piped to the house and it would have been their water source.

“I think [the previous owners] probably decided they didn’t want the well anymore and they’d used it as a place to hide everything, brick it up and pretend it’s not there.”

Alice further continued: “So with the damp problem we had in the basement, it took us outside and we started chipping off the render that was on one of the exterior walls as we were worried it was holding the damp back.

“We found this area that had been bricked up and it was old bricks, sort of Victorian bricks.”

She said that the “big space” was full of “all kind of building rubble” and items that could have been thrown into the well, such as buttons and a Queen Victoria’s 60th Jubilee piece.

Alice added: “We took one of the top bricks out that was quite loose and you could see this cavern behind and it was quite dark.

“We must have taken countless trips to the dump, all this stuff and we’ve managed to get the point where it’s actually two meters deep and it’s started to fill with water.”

However, the excitement didn’t stop there, and when Alice and Ben starting clearing out cupboards, fireplaces, and ripping up floorboards, they uncovered more fascinating items.

Alice said: “In my daughter’s room we found a little token.

“We were digging out the fireplace—the stone on the top had slightly sunk—so we decided to have a look at what was broken so we took these bits [pipes, beads, and newspapers] out and we found all kinds of pieces underneath there.”

Alice further continued: “The token is almost like an IOU, I think. I’m going on what I’ve been able to find on Google.

“It is lead, so it’s quite heavy and it has an anchor imprinted on it. I think they were given as a way of payment if the company didn’t have enough money to pay the people.”

Alice and Ben are both keen to discover the history of the items they have found in their home, including the well.

Alice further added: “This house is on a street now called Albert Road but it used to be called Naval Row or Navy Row.

“It would be quite interesting to know how these bits relate to the people who used to live in our house.”