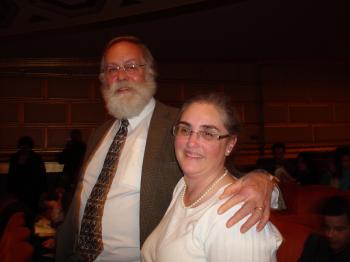 Mrs. Cronander was particularly interested in the intricate costumes, and as a costumer, she was intrigued by how some were put together. "It was very interesting. I love the costumes. I’ve been sort of keying in on the way the costumes are put together. Trying to figure out whether they were wearing spats over shoes, or whether they’re really wearing boots. Because I do a dance show every year.”

“The designs are beautiful, the colors are lovely. The fabrics that they choose dance really well. They move beautifully on stage. There is a sameness throughout, but that’s because of the type of production it is.”

This was the first time Mrs. Cronander had seen a DPA performance, she explained “This is the first time I’ve been to a live show like this. I’ve never seen Chinese classical dance up-close and personal.”

Mr. Cronander, a systems engineer, explained that they came to see the show because he bought tickets as a Christmas present for his wife. Mrs. Cronander had left the advertisement on the table for him as a hint for what she wished for, he explained, “That’s primarily why we came tonight. To see the costumes and the dances.”

The Epoch Times is a proud sponsor of the Divine Performing Arts 2009 World Tour. Please see DivinePerformingArts.org for more information.