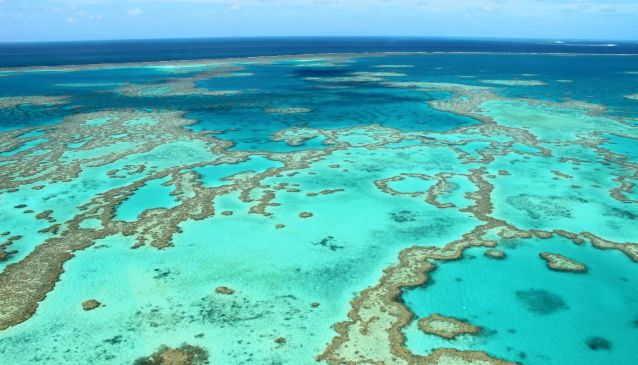 It’s month six, continent six! After five months of travel we’ve finally arrived in Australia and we’re kicking off our two weeks in Oz with a strong start.

We’ve spent the last week in the Whitsundays, Queensland, which has to be one of the most gorgeous places we’ve visited on this trip. It’s a collection of 74 islands spread along the Great Barrier Reef amidst impossibly blue ocean and super-white sand beaches.

The Whitsundays also has given us the chance to complete some major bucket list activities: from visiting the Great Barrier Reef to meeting up with the legendary winner of Queensland’s “Best Job in the World” Ben Southall, and spending a few nights on the exclusive Hamilton Island.

We were greeted by local MyD rep Tammy and ushered into a zebra-striped limousine courtesy of Mama Africa’s nightclub for a ride to our base camp for the week: Airlie Beach. Airlie is a mellow seaside town that is the gateway to the region and a destination in its own right. It’s been popular with backpackers for years but has recently got a makeover and is steadily moving upmarket.

We checked into the centrally-located Airlie Beach Hotel and prepared for the first treat of the week: a therapeutic massage courtesy of Diane and Fez of Ra Natural Health, the perfect cure for five months of carrying our camera gear around the world!

Our arrival also coincided with the North American holiday of Thanksgiving, which we were lucky enough to celebrate in the home of American expat and MyBBB entrant Tori Frobish. We took the time to express our gratitude not just for Tori’s hospitality, but for all the wonderful experiences and opportunities that this trip has provided us.

The week ahead had even more to be thankful for, starting the next day when we met up with Ben Southall. Ben rose to fame by winning Queensland Tourism’s “Best Job in the World” in which he spent six months living on Hamilton Island as the caretaker of the Great Barrier Reef. Ben was later a judge in the MyBBB contest where he (thankfully!) picked us as the winners.

It was an honor to meet Ben and have him show us around his former stomping grounds of the Whitsundays. We joined up with local tour operator Ocean Rafting to explore the beautiful Whitehaven Beach, a 7km stretch of sand that was whiter than any beach we’ve ever seen. We soaked up our surroundings with an incredible Aussie barbeque right on the beach courtesy of Tim Whitehorn, executive chef of Capers Restaurant: lobster and prawns with crocodile and coconut sausages, washed down with Tim’s signature punch!

The bar was raised high for the week, but local MyD rep Tammy kept pulling out surprises: we were named honorary citizens of the Whitsundays by Mayor Jennifer Whitney and Councilwoman Jan Clifford. To celebrate, we took to the skies in the Whitsunday’s most unique tourist attraction: an aerobatic flight in the 1941 biplane called The Tigermoth! There was only one seat to spare, so we left it up to a game of rock-paper-scissors. Alex won, and as I watched the plane do barrel-rolls, flips, twists and controlled stalls, I was quite happy that I stayed on the ground.

That afternoon we checked into a penthouse room in the hilltop Mediterranean Resort to enjoy one last view of Airlie Beach before setting off in the morning to cross off the biggest bucket list item of the week: diving the Great Barrier Reef.

The following morning we boarded a Cruise Whitsundays ferry to Reefworld, a pontoon on the edge of Hardy Reef, the most accessible part of this enormous ecosystem. Larger than Texas, the Great Barrier Reef is the largest structure build by living organisms, the largest marine park on earth and the only living thing seen from space.

Basically, it’s big, it’s beautiful, and we were keen to get down and take a look at it, so we met up with local underwater photographer Shane Batham to go on a dive and check out some of the more choice parts of the reef.

We were blown away by the diversity of aquatic life living on the reef. Its home to 1,625 species of fish including 1400 coral reef species, and we saw a great deal for ourselves.

It was quite a profound experience, and after coming out of the water we didn’t want to leave such a special place so quickly, so we opted to spend a night on the deck of the pontoon, for a “Reefsleep”: sleeping in a “swag” under the stars, surrounded on all sides by the reef.

The next morning we left the reef pontoon via helicopter, heading over the reef on our way to our third bucket list destination: Hamilton Island, one of only six inhabited islands in all the Whitsundays.

It was a private ranch before it was converted into a resort a few decades back and now, with only 30% of the island developed with hotels and restaurants, it’s a gorgeous place to enjoy the stunning landscapes of the Whitsundays while having all the comforts of home.

Copyright © 2014 by My Destination. This article was written by Marko Ayling and originally published at My Destination Whitsundays