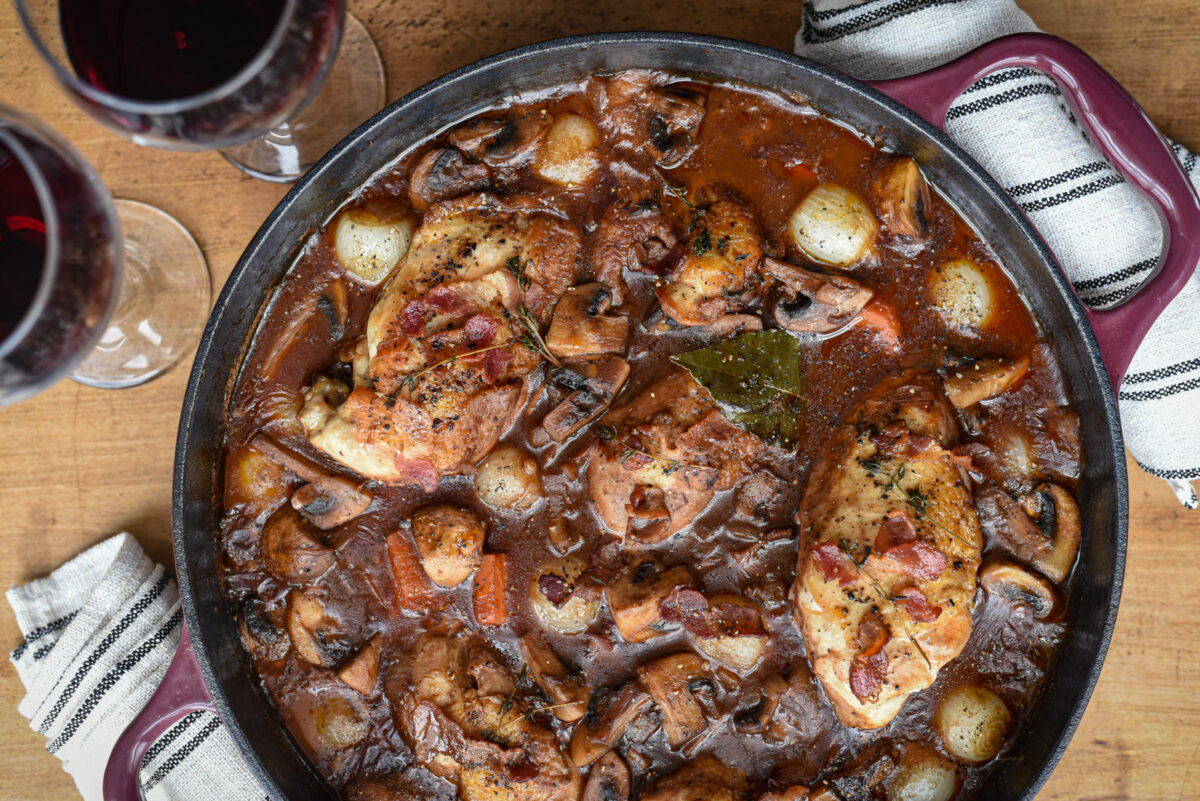 Rustic yet refined, the traditional stew of chicken braised in a rich wine sauce is a pot of slow-cooked comfort
BY Audrey Le Goff TIMEMarch 9, 2022 PRINT

The year: 52 B.C. The scene: The Battle of Gergovia, in modern-day Auvergne, France, between the Romans, led by Julius Caesar, and the Gallic people, led by Vercingetorix.

The day before the battle, the story goes, Vercingetorix sent a rooster to Caesar as a warning about the bravery and fierceness of the French troops he was about to face. A few hours later, Caesar invited Vercingetorix over for dinner. On the menu? Vercingetorix’s valiant rooster, chopped up and cooked in wine.

Or so goes perhaps the most famous legend behind coq au vin—literally “rooster in wine”—an iconic French dish from the country’s rustic cooking repertoire.

As with many classic recipes, coq au vin’s origins are debated, and they fuel many legends. Perhaps a less dramatized explanation for the dish is that it was originally developed by resourceful French cooks to tenderize the tough meat of older roosters.

Coq au vin has been documented as a popular French dish since the early 20th century, but was brought to fame in North America thanks to Julia Child, who included her version of it in her 1961 cookbook, “Mastering the Art of French Cooking.”

The dish is traditionally made from a whole chicken cut into eight pieces, with bacon, mushrooms, and carrots, cooked until tender in Burgundy red wine, resulting in its signature purplish sauce. It’s a delicious, hearty, and comforting recipe—yet a little more impressive than your average chicken stew.

Variations on a Theme

In many ways, the classic coq au vin rouge recipe is reminiscent of beef bourguignon, another famous dish from the Burgundy region. In both cases, the meat is braised in Burgundy wine with carrots, mushrooms, and onions.

But you’ll find a plethora of variations on coq au vin throughout France. The basic components of the recipe remain the same: chicken on the bone, vegetable fixings, and wine—with each region using its own locally produced bottles. Some of the most famous versions include coq au pourpre (made with Beaujolais Nouveau), coq au riesling (made in the Alsace region), and coq au Champagne (made in the Champagne region).

Coq au vin blanc, traditionally made with a dry white wine such as sauvignon blanc or pinot blanc, is another popular take that’s brighter in flavor, with the sauce optionally enriched with cream.

The classic coq au vin rouge recipe has a big reputation, which includes taking zero shortcuts to achieve its authentic flavors. But don’t be intimidated—you’ll quickly realize that it’s in fact a very approachable recipe. All the ingredients, techniques, and instructions are straightforward and easy to complete. Simply choose your ingredients wisely, take it step by step, and you’ll be all set for success. Here are some key components:

Coq au vin is meant to use a whole bird, cut into pieces. Bone-in pieces truly impart so much flavor to this dish, so I recommend you go this route. If you don’t want to break down the chicken yourself, you can ask your butcher to cut it into eight pieces: two drumsticks, two thighs, two wings, and two breasts. Choose the best quality bird you can find; a locally raised, free-range chicken is ideal.

You shouldn’t necessarily reach for a pricy bottle, but do use one that’s still drinkable (forget the “cooking wines” from the grocery store!).

Beurre manié, French for “kneaded butter,” consists of equal parts soft (room temperature) butter and flour, kneaded together by hand or with a fork to form a paste. The raw paste is then traditionally used to thicken soups and sauces, such as in coq au vin. While the flour acts as a thickener and gives the sauce body, the butter imparts a shiny gloss.

Adding beurre manié into the coq au vin sauce is a last-minute step, to be done just before serving—guaranteeing that you’ll bring a rich, glistening dish to the table.

This big dish is perfectly suited for hosting, as it tastes even better the next day. Make it a day in advance and reheat it over low heat just before serving.

Coq au vin is best served over mashed potatoes, thick tagliatelle pasta, or white rice. A crusty baguette on the side is mandatory for dipping into the rich, silky sauce.

At least 2 hours before you start cooking, rinse the chicken pieces thoroughly and pat them dry all over with paper towels to remove any excess moisture. Season with salt and pepper on both sides. Be generous and make sure to get inside all the nooks and crannies. Set aside to “warm” to near room temperature. You can wash, peel, and chop your other ingredients in the meantime.

Preheat your oven to 350 degrees F with a rack in the middle.

In a large heavy-bottom skillet, melt 1 tablespoon of the butter. Cook the bacon matchsticks over medium heat for 7 to 8 minutes, until crisp. Set aside on a plate. Don’t wash the skillet.

Place the chicken pieces into the skillet and cook for 5 minutes on each side, until the skin is golden. Set aside with the bacon. Don’t wash the skillet.

Add the onion and garlic to the skillet and cook for about 10 minutes, stirring occasionally with a large wooden spoon, until lightly caramelized. Add the tomato paste, brandy (or cognac), wine, and bay leaf, and stir to combine—make sure to scrape off the bits from the bottom of the skillet. Bring to a simmer and reduce for 10 minutes, uncovered.

Add the chicken pieces back into the skillet, along with the chopped carrots. Top with the bacon and sprigs of thyme. Bring to a slow simmer again, cover with a lid, and place in the oven. Cook for 30 minutes, until the chicken is cooked through and no longer pink in the middle.

While the chicken cooks in the oven, melt 1 tablespoon of butter in a pan over medium heat. Cook the mushrooms and shallots for about 10 minutes, until cooked through.

Remove the chicken from the oven. In a small bowl, mash together the remaining 1 tablespoon of butter and the flour and stir into the skillet with a fork. Add the pearl onions and mushrooms, and simmer over medium heat for about 10 minutes, or until the sauce thickens to your liking. Serve.