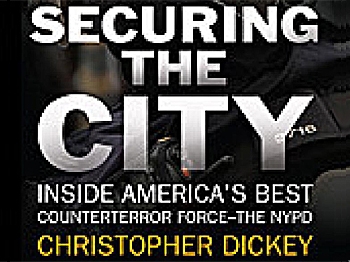 Cops and Terrorists and the Cities in Between

By Genevieve Belmaker
Print
New York City is one of the safest places to be in the post-9/11 world, believe it or not. Just look at the foiled terrorist plot on May 20 uncovered through a joint NYPD-FBI sting operation. Homegrown terrorists wanted to use explosives to blow up two synagogues. They had surface-to-air missiles that they attempted to use at Stewart Air Force Base. But instead of getting their wish of punishing Americans, they got booked by police for their insidious plot.

The reason these and other terrorists have not attacked New York since 9/11 can be found in journalist Christopher Dickey’s new book, Securing the City: Inside America’s Best Counterterrorism Force—the NYPD.

In the aftermath of 9/11, the bureaucracy of the CIA, FBI, DHS, DIA, and NSA (the “three-letter guys," as police call them) proved to have cumbersome processes for warding off future attacks. Kelly was of this opinion, and after being reinstated as New York Police Department Commissioner in 2002, he found NYPD cops who could go inside the world of potential terrorists—in New York and cities around the world. The road to creating that elite force and the impact on public security since is described in Dickey’s book.

Commissioner Kelly started by focusing on recruiting native speakers of the key languages needed to track activity in the world of terrorism—including Arabic, Farsi, and Dari. It has been a key part of how the NYPD has surpassed expectations for preventing terrorist attacks.

Kelly has also seen to it that the about 600 counterterrorism agents are stationed not just throughout New York’s five boroughs, but around the world. They not only speak the languages, but they know the neighborhoods and streets of the communities they are watching. Many of them, in a manner reflective of New York City’s general ethnic makeup, are foreign-born.

In contrast, it would be almost impossible for foreign-born applicants to get a similar position with the federal government because of prohibitive laws. The “three-letter guys” require lengthy, detailed, and invasive background checks for potential new hires.

Securing the City is an incisive look at a little-examined section of the NYPD, and highlights the dense amount of red tape that stands between the federal government and its ability to fight terrorism.

For most readers of Securing the City, won’t realize what they’ve gotten themselves into until it’s too late. Written with an edgy, streetwise voice that puts you almost uncomfortably close to the cops and terrorists, Dickey weaves a spell of suspense and disbelief so tight that it’s easy to forget you’re reading a nonfiction book.

It is filled with scenes of terrorist plots, shady characters, heroic and often salty cops, Feds who think the NYPD is a thorn in their side, and the grit of New York City. It plays out like a prime-time drama series, and is just as addictive.

Dickey, who has authored five other books, seems to intuitively sense when the details are getting wound too tightly for the reader to follow, and ends each chapter just in time. The shorter, action-packed chapters are also filled with the plain talk and swift actions of cops and terrorists without being profane or overly graphic.

In fact, Dickey’s decades of experience as a journalist lend a quiet, underlying air of authority to the book. Just when it becomes hard to believe, a historic detail or interview with a member of the NYPD jars you back to the present.

Securing the City is not a book that can be fairly described and encapsulated in a review or even a conversation. The author’s level of extraordinary access to the NYPD’s counterterrorism force is somewhat of an anomaly to begin with—Dickey was given special access because of his affiliation with Newsweek and his book. That alone makes it a worthy read, especially for law enforcement officials and New Yorkers.