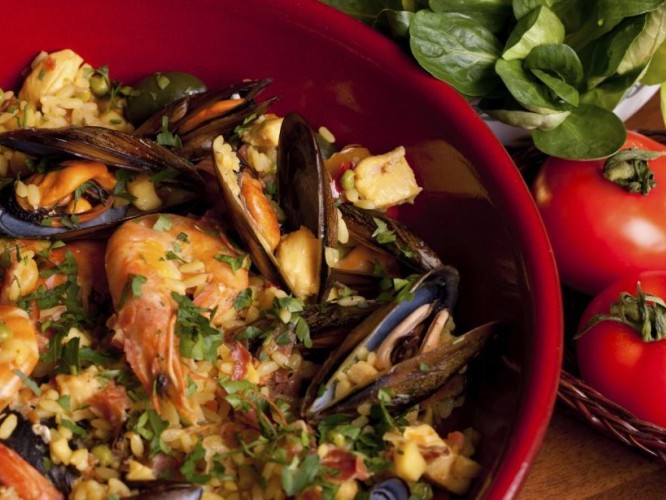 Paella is a Spanish dish that utilizes medium grain rice in a very creative way. Not dull at all, the dish can be made with just about any ingredient that goes with rice. (Corina Daniela Obertas/Photos.com)
Food

When one thinks of cooking a dish with rice, many times one might think of it as being boring, with little taste, or perhaps that it’s impossible to make a dish shine with this grain. But the truth is, there are many great possibilities.

Aside from having a substantial amount of varieties, the real secret to using rice in recipes is in knowing which type of rice to use to get the consistency needed for certain dishes, thus highlighting the ingredients that are served with it.

One thing to keep in mind when grabbing that bag of rice is that certain cuisines lean toward creating superb dishes with rice, such as Chinese cuisine.

It’s common knowledge that China is the largest producer of rice, where it is harvested from May to June and from August to September. And Chinese cuisine has an endless supply of delicious and innovative recipes with rice as a main ingredient.

Nevertheless, let’s not forget that the most important ingredients to use when making a dish are intuition, imagination, and expression, for which rice—thought it may be hard to believe—can be a special element.

Why is so special? Rice is special because it is a mild-flavored, neutral grain that can be served with so many kinds of other ingredients. Whether served with pork, beef, lamb, poultry, seafood, all kinds of spices, sauces, vegetables, and even prepared as a dessert like rice pudding, this special grain works well with them all.

Its versatility is not just its being able to go with almost any ingredient, but that it can be cooked in many ways: sautéed, steamed, baked, boiled, stir-fried in a wok, and even fried.

Another advantage in using rice is that due to its high starch content, it is a perfect side to main dishes, as well as perfect for adding consistency to a filling.

According to “The Cambridge World History of Food,” there are well over 80,000 varieties of rice worldwide. However, very few are sold commercially. Touching on just a few basic types and forms, there are several to consider for purchase: sweet glutinous rice, large-grain indica, medium-grain japonica, parboiled, short-grain japonica, basmati rice, brown rice, and wild rice.

Keep in mind that each type has different styles of cooking, has very different properties, and some are used solely for preparing certain dishes. You cannot use any variety of rice to prepare just any dish, so it’s important to know the types of rice out there, as well as what they are best used for.

Having high starch content, glutinous rice is ideal for Asian dessert dishes like rice pudding, for making sticky rice, or where a starchy rice adds to a filling, such as with zongzi (rice dumplings). Also called sweet rice, it is also made into flour and can be used to make rice flour pastries.

Long-grain indica rice, also called Indian rice, nearly one-quarter inch in length, comes from Asia, and has less starch than any other variety. It is quick cooking; the grains stay separate and fluffy. This grain is ideal for salads, plain white rice, an accompaniment to steamed vegetables, Mexican rice, and depending on the recipe, for paellas.

Medium-grain rice is just over one-fifth inch in length, and is the most widely consumed. The most popular type in the United States is California Rose (Calrose). This rice is suitable for paellas, baked rice dishes, casseroles, and some risottos. A japonica variety, it is stickier than long-grain, best steamed, and is often used for making sushi rolls.

Also called converted rice, due to being partially processed, it doesn’t overcook, does not become sticky, and is slightly more nutritious than white rice. It also absorbs the flavor of other ingredients well. This rice goes well in broths and soups.

Short-grain japonica rice is distinct from long-grain rice. Considered a round, short, small-grain rice, this rice cooks fast, and is rather starchy. A favorite rice for sushi, it is commonly used in Japan. It is also a favorite in Italy for making risotto. Short-grain rice is ideal for sweetened rice pudding.

Long and fine-grained basmati rice is supposed to be light and fluffy when cooked properly. This rice is heavily used in India and Pakistan, and is an aromatic rice like jasmine rice. The white grain version is more easily located, but you can sometimes find a brown version. This rice is ideal for serving with South Asian curries, and other dishes with heavy gravies and sauces.

Brown rice is most easily found in long- and medium-grain. It is darker because it has not been polished, and only the hull has been removed. Brown rice is rich in vitamins, and has a slightly sweeter and nuttier taste than white rice. It also takes nearly twice the amount of time to cook as white rice. This rice is ideal for the health conscious, and for use with vegetarian dishes.

Not really rice, this grain is also called Canada rice. Found in North America and certain parts of Asia, the most common species of the grain, is the Northern wild rice, which grows in marshy soils in certain parts of Canada and the United States. This very dark and crunchy grain has a strong nutty flavor. This grain is generally used in a mix, and takes much longer to cook than the other types of rice.

Other than being all of the above, it has important nutritional qualities. Among those, we emphasize that it contains tiny amounts of fat, no cholesterol, and negligible amounts of sodium, and is only 103 calories per half-cup serving of white rice.

If you cook rice often enough, you may want to consider purchasing a rice cooker, as they are reliable appliances, steadily delivering well-prepared rice.