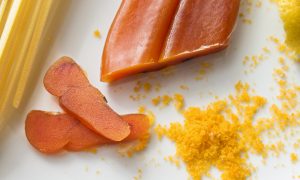 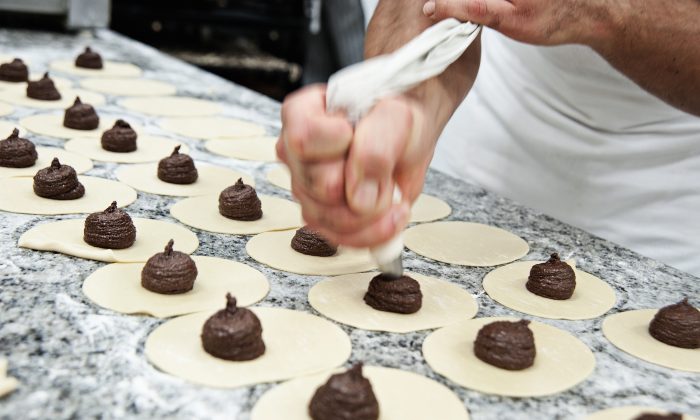 From pasta dough to ragu, Italian chefs explore the savory side of chocolate
By Francine Segan

Most of us think of chocolate as something for dessert only, but Italians have been adding it to pasta, risotto, polenta, and other savory dishes for centuries. To understand why, it’s important to remember that cacao beans are seeds. Thus, like many other seeds—pepper, fennel, cardamom, and caraway—cacao beans are not naturally sweet and may be used as a spice.

Italian chefs understood this when the beans first arrived from the New World and immediately began experimenting, adding it to many savory dishes. Like fine wine, fine dark chocolate has an amazingly complex taste profile, with hundreds of distinct, nuanced aromas and flavors.

Journey From the New World

Chocolate originated in the Americas, where it was enjoyed as a drink almost four thousand years ago by the Aztecs and Mayans. Archaeologists have discovered many ancient remains of chocolate making, including a vessel with chocolate residue near Mexico that dates back to 1900 B.C.

Chocolate’s journey from the Americas to the Old World began with an Italian. Christopher Columbus, during his fourth and final voyage to the New World, became the first European to set eyes on cocoa beans. On August 15, 1502, he and his crew encountered a large Mayan trading canoe off Honduras, filled with an assortment of goods including cotton clothing, tools, weapons, and cacao beans. Never having seen them before, he erroneously thought the beans were almonds.

In an account later published as “The Life of Admiral Christopher Columbus,” Columbus’s son Ferdinand noted that the Mayans “seemed to hold these almonds at a great price; for when they were brought on board together with other goods, I observed that when any of these almonds fell, they all stooped to pick it up, as if an eye had fallen.” Columbus was sailing for Spain’s Queen Isabella, so these cacao beans first entered Europe through Spain, but they quickly made their way into Italy.

Italians are responsible for the invention of many chocolate dessert dishes, among them chocolate dessert soup, chocolate custard, and even chocolate granita and sorbet, which were created in Naples in the mid-1700s. Italians were also the first to combine chocolate with coffee: In 1678, the then king of Italy licensed a baker from Turin “to sell a chocolate drink” topped with a layer of cream and espresso. The drink, served in a small glass with a metal base and handle, later became known as bicherin, meaning “little glass,” and remains popular today.

Pellegrino Artusi’s 1891 cookbook, “Science in the Kitchen,” includes a delicious recipe he calls torta alla Milanese, or “Milan pie,” which is made with minced beef, chocolate, pine nuts, and raisins. Though Artusi attributes the pie to Milan, similar chocolate meat pies, called ‘mpanatigghi, have been eaten in Sicily since the late 1600s.

According to Pierpaolo Bonajuto, sixth generation owner of L’Antica Dolceria Bonajuto, Sicily’s oldest chocolate factory, which still makes this unusual treat, “legend has it that this dish was invented by the nuns of the monastery dell’Origlione di Palermo, and offered to pilgrims as a high-energy food well-suited for their long journey. The chocolate, it was believed, helped the meat stay fresh.”

Italians enjoy chocolate with pasta in hundreds of ways—as filling for ravioli and tortellini; cooked into many meat sauces; nibs sprinkled on pasta instead of grated cheese; and even incorporated into the pasta dough itself.

The Italians have a lovely trick of adding cocoa powder to the water when boiling pasta, creating a sort of “instant” chocolate pasta that turns rich and earthy. The cocoa powder adds a chocolatey aroma to the boiled pasta, along with delicate flavors of dried fruit and toasted nuts—the subtle range of tastes in unsweetened cocoa, which we especially notice in savory dishes. Nuanced and delicious, this sort of chocolate pasta is often served with creamy mascarpone infused with hints of orange liqueur, fragrant basil, and crunchy hazelnuts.

Dishes also vary by region. Sciabbó, pork ragu with a touch of chocolate and cinnamon, is a specialty of Enna in Sicily, served in the winter, especially during the Christmas holidays. The dish, which dates back to the 1700s, is traditionally made with pretty, curly-edged noodles called lasagne ricce, which look like the ruffles that were popular on men’s shirts back then. The name of the dish, “sciabbó,” is in fact a Sicilian corruption of “jabot,” the French word for those shirts.

Another Italian Christmas dish is maccheroni con le noci, pasta with melted chocolate topped with walnuts, a specialty of Italy’s central regions of Lazio and Umbria. The dish is often served on Christmas Eve.

The southern island of Ischia, in Italy’s Bay of Naples, has been an important center for chocolate production for centuries, so it’s only logical that they’d cook with chocolate there. What is less obvious is that they’d cook it with seafood. But at the island’s Ristorante Alberto, chef Gianni Mattera serves mussels with pasta in a rich, satiny chocolate sauce that breaks all preconceived rules about seafood and pasta. The touch of milk chocolate that Mattera adds leaves a lingering hint of creaminess that pairs superbly with the mussels’ natural briny sweetness.

Piedmont, in the northern region of Italy, also has a long history of chocolate making. The restaurant Bistrot Relais Cuba is owned by a family that has been making chocolates for over a century. Their menu includes many classic Italian savory chocolate dishes such as the region’s famed tiny ravioli called plin, served in chocolate sauce; risotto in brown butter with Ecuadorian dark chocolate; and smoked salmon rolled in white chocolate-ricotta topped with smoky dark chocolate balsamic vinegar. At this restaurant, which has won the highest scores for 10 years in a row from Gambero Rosso, Italy’s prestigious restaurant ratings, you’ll even find dishes cooked in cocoa butter, such as a spectacular scampi with pasta.

Chocolate is also used to season meats. Like wine, vinegar, and lemon juice, chocolate provides just the right touch of acidity and acts as an emulsifier, adding natural thickness to second-course meat and fish sauces.

Venchi’s Martelli, whose company was founded in Piedmont over 140 years ago, explains that wild game—boar, venison, duck—is almost always served in agrodolce, a traditional Italian sweet-and-sour sauce, that has a touch of dark chocolate or cocoa powder. Chocolate is even found in many classic fish dishes, such as baccalá alla cappuccina, cod fish dusted with cocoa powder, while sea bass and turbot are often served in a cocoa crust.

As Martelli says, “Everything is better with chocolate!”

Makes 1 pound, enough for 4 to 6 servings

The trick to making chocolate pasta is to add the cocoa powder after the pasta dough is formed. It’s easier to work with that way and tastes better, too. Italians serve savory chocolate pasta with all sorts of meat sauces, especially game or with cheese sauces, or any type of pesto.

Mound the flour in a large bowl or work surface. Make a deep well in the center and add the eggs, yolk, olive oil, and pinch of salt. Beat the mixture with a fork, and then slowly incorporate in the flour.

Knead the dough, about 10 minutes, until it feels silky, then add the cocoa powder kneading until incorporated. Add a few drops of oil or water, if dry.

Working in sections, pass it through your pasta maker, following manufacturers instructions, or roll it out with a rolling pin.

Cut the pasta into any shape you like, and toss with semolina flour to keep it from sticking.

In a large saucepan, heat 2 tablespoons of oil over medium high heat. Add the onion and saute until soft, about 12 minutes. Add the diced pork and cook until browned, about 5 more minutes. Add the Marsala, turn down the heat to medium low, and simmer for several minutes to burn off the alcohol. Stir in the tomato puree, cinnamon stick, chocolate, and sugar to taste. Season with salt and pepper, cover, and simmer for 1 hour, stirring occasionally. Remove the cinnamon stick.

Cook the pasta in salted, boiling water until al dente. Drain and toss into the sauce until well amalgamated. This pasta is not traditionally topped with grated cheese, but you can if you like.

Put the mussels in a skillet large enough to later hold the pasta, sprinkle with a few tablespoons of water, cover, and bring to a boil until the shells open. Remove the mussels from the shells, put into a bowl along with any pan liquids; set aside. Discard the shells.

Heat 2 tablespoons of oil in the same pan over high heat. Add the zucchini and fry until golden. Stir in the garlic, red chili peppers to taste, and the reserved mussels and simmer for a minute, stirring to combine. Add the wine and raise the heat for a few minutes to evaporate the alcohol. Add the strained tomatoes (if using tomato paste, mix with 1/4 cup of water until very smooth) and lower the heat; simmer the mixture for an additional 5 minutes, then take off the heat. Add the mozzarella and chocolate and stir until both dissolve.

Meanwhile, par-cook the pasta in boiling, salted water for 4 minutes less than the suggested cooking time. Drain and toss into the sauce. Cook all together over low heat, adding a bit of the liquid from the mussels, if needed, until al dente. Remove from heat, and add grated Parmesan cheese to taste, stirring until melted. Divide between two plates, and garnish with parsley.

Note: If you’d like to serve four, double the ingredients and use two pans because the sauce becomes velvety only when cooked in small batches.

Bring a pot of salted water to a boil. Add the pasta and cocoa powder and cook until al dente.

Meanwhile, in a frying pan large enough to later hold the pasta, toast the hazelnuts in the butter over medium heat about 5 minutes, until aromatic. Pour in the Grand Marnier and stir a few seconds to burn off the alcohol. Reduce the heat to low, add in the cream and mascarpone cheese, and stir until creamy.

Drain the pasta and toss with the sauce. Add grated Parmesan cheese and salt to taste. Serve topped with basil cut into thin ribbons, grated dark and milk chocolates, and long strips of orange zest.

Cook the pasta according to package directions. Drain, return to the cooking pot, and, off the heat, immediately toss with sugar, chocolate, walnuts, rum, zest, and pinch of cinnamon and nutmeg. Toss well, until the sugar and chocolate dissolves. Serve topped with grated chocolate.