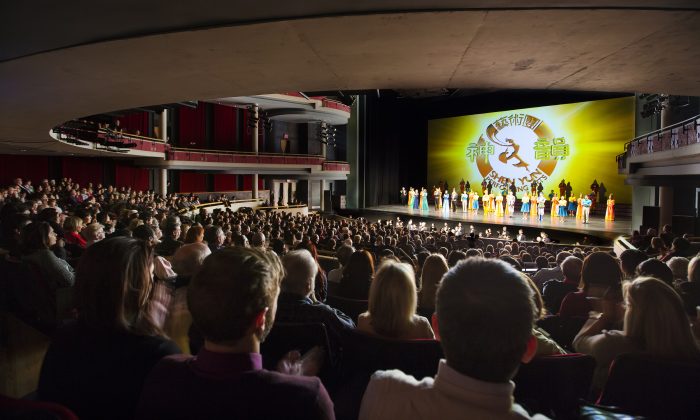 MISSISSAUGA, Canada—Jim Dimanis is a climber, in two senses. He strives to improve himself professionally, and he seeks higher places.

Those are two goals he shares with the dancers of Shen Yun Performing Arts, performers known for their exceptional skills as well as their effort to revive a divinely inspired culture.

For Shen Yun’s performers, “this spiritual connection is motivation for striving to excel, is the heart behind each movement of the dancer, and each note of the musician,” explains Shen Yun’s website.

Mr. Dimanis is Chief Operating Officer of Rock Advisors, a real estate consulting and brokerage firm specializing in apartments. He also overseas the DALA Group of Companies, which focuses on marketing and financing for apartment buildings. His Twitter feed makes his interest in professional development clear, as well as his love of rock climbing.

Shen Yun was an experience unlike anything he’d had before, he said.

“It’s fantastic. That’s an eye-opener for sure.”

He said the performance gave him a new appreciation for Chinese culture.

“It’s very rich—the dance, the music, and the stories. I think that the way in which they translate the stories, you can’t help but feel it.”

That experience taught him a great deal, he said, adding that he was leaving the theatre with a greater respect for the world’s longest, uninterrupted civilization.

Shen Yun was founded on a mission to revive 5,000 years of divinely inspired culture, a heritage largely destroyed in China proper after 60 years of communist rule. Shen Yun, based in New York, tours the world with an all-new program every year that celebrates China’s rich history.

Mr. Dimanis also complimented Shen Yun’s vivid animated backdrop, an innovation Shen Yun has pioneered to the delight of audiences around the world.

“It was fantastic. I think that they did a really good job with the backdrop. It was very clever, and it really captivates you. And certainly those scenes are breathtaking.”

Those scenes are created by a talented team of visual artists and extend the stage to diverse eras and regions, as well as heavenly realms.

One piece Mr. Dimanis singled out captured the range of Shen Yun’s dramatic story-based dances—Ne Zha Churns the Sea which tells the tale of a demi-god born as a giant meatball to a local lord and lady.

As the ancient story goes, he quickly became a young hero who battled an evil dragon terrorizing the village.

“I thought that the young man was a phenomenal entertainer,” said Mr. Dimanis of the lead dancer who played Ne Zha.

The performance was something he would take with him, he said.

“I think those memories will stay with me for a long time.”

Financial writer Elle Sharma was also impressed by the performance she took in on Friday evening.

“I thought it was very colourful and very well orchestrated,” said Ms. Sharma.

“All the dancers were very much in synch with each other.”

She added that she enjoyed seeing the different eras within China’s history presented on stage through the various story-based dances.

With reporting by Teng Dongyu