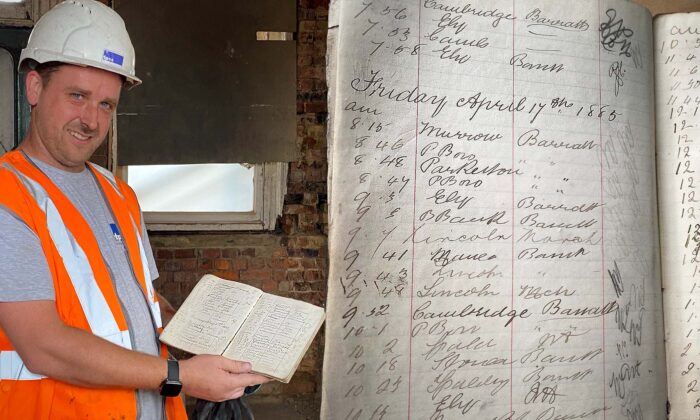 A builder has found a Victorian-era train ticket ledger from 1885 after it fell through the ceiling at a railway station.

George Thorne discovered the 136-year-old “hidden treasure” as he removed some rotten woodwork while renovating the station’s ticket hall.

The ledger, dated April 1885, contains hand-written entries of all the passenger luggage and parcels sent from the station.

Known in the 1800s as a “day book,” it provides a unique record of daily life in Victorian Britain.

The ledger will be displayed inside the station in March, Cambridgeshire—which first opened in 1847—once redevelopment work is complete at the end of the year.

Builders later found three small logbooks from the 1800s and a Victorian Great Eastern Railway sack, which was used to carry goods such as seeds and flour.

They also discovered documents dating back over 100 years detailing goods trains passing through the station with records of the signal boxes contacted by telegraph.

Mike Lamport, a local historian, commented: “These fascinating items all reflect the pivotal nature of March station to the area, having as it did the authority of senior staff based there, along with a loco shed and sidings from which managers could draw locomotives and rolling stock from to run special services as demand arose.”

The station’s renovation work is being carried out by train company Greater Anglia.

Anita Stuart, customer service manager at Greater Anglia, said: “We couldn’t believe it when the contractor showed us the ledger. It was like finding hidden treasure!

“It’s lovely to have uncovered this link to the past as we take March station forward to become a station fit for the needs of rail travelers now and in the future.”