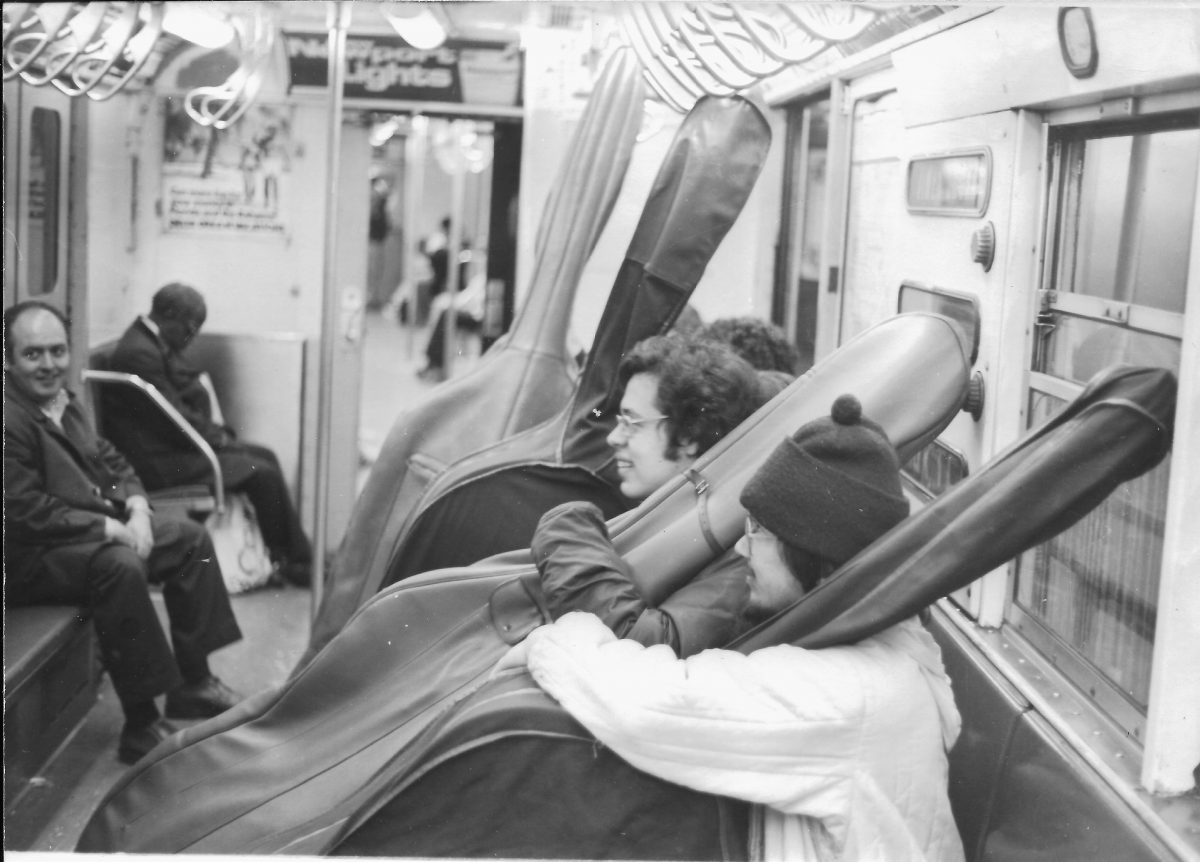 Joe Tamosaitis (2nd right), in the late ’70s, was a member of the Times Square Basstet, here commuting on the New York subway. (Courtesy of Bernie Tamosaitis)
Arts & Culture

Despite the richness of the voice of the grandfather of stringed instruments, the contrabass or bass—an instrument that, in the right hands, tells its own story through great depth, color, and individuality—few bass players find much public recognition. However, two wonderful virtuosi should never be ignored again—American Joe Tamosaitis and Romanian Botond Kostyak.

When I was in my teens at Juilliard, I wanted to hear what other really gifted players were doing and to find out what they were all about as human beings.

In the early 1970s, I was studying the wonderful Franz Schubert sonata called the Arpeggione. (The sonata was written, in fact, for a special instrument called the arpeggione. In theory, it is a most remarkable instrument with many strings, fretted like a guitar but bowed like a cello. But in practice, it sounds feeble compared to the more nimble viola or incredibly rich cello.)  As I walked by the practice rooms, I was bowled over to hear emanating from a room some great sounds on a contrabass. The instrument was singing.

I know what it is to sing on an instrument because most of what my great late father Oscar Shumsky taught me was about the importance of this. At the time, I played trumpet as well as viola, and singing is paramount on that gorgeous instrument.

But here the contrabass was singing, and the player was Joe Tamosaitis. Joe is a very sensitive person, and my memories of him coaxing gorgeous sounds from the contrabass will not soon leave me. The richness provided by his burnished bass was extraordinary, and the piece danced.

Flash forward in time, and I am in the home of a very fine Swiss violinist, Emilie Haudenschild. I hear wonderful playing. At first I am confused since I think I am hearing the richest and deepest cello sound, played with a fleet virtuosic technique that many fiddlers would envy.

I knocked on the door and discovered Botond Kostyak, the great Romanian contrabassist practicing for an upcoming concert. He was tossing off runs and cascading harmonics, and they were sparkling up and down the fingerboard. He made it feel natural, easy, and it was enjoyable to watch.

His playing was contagious. I was ready to step up and transfer my viola fingers and bow to his bass. But something inside stopped me; I had too much respect for the extraordinarily hard work that he had put in to be able to give others the impression the playing was easy.

The bow technique of many contrabass players is mostly back-and-forth strokes. For most string players, however, back-and-forth bowing is considered an insensitive kind of playing because the strokes are not connected. The art of bowing has much to do with a beautiful legato stroke connecting the downward motion of the bow to the upward.

Though some bass players will remark on how different it is to play the largest of the stringed instruments, it is possible to apply the same technique. These two virtuosi have overcome the inherent difficulty of playing the longer strings of the bass that respond slower than those of an instrument with shorter strings, a violin, for example.

But music is music. Connection from one note to the next is the same. Whether the sound emanates from a half-size violin or a fully fledged bass, the connection of musical notes imbued with feeling is what music is all about. Beautiful sound—singing—is paramount.

Botond, brother to the fine cellist Emeric  Kostyak, is a formidable virtuoso and presently teaches at the Vienna Hochschule and as well leads the bass section at the L’Orchestre National de Lyon. He is a person seemingly devoid of the diva qualities of many players these days. He has many remarkable YouTube videos to his credit.

Joe Tamosaitis, whose brother is also an excellent cellist, Bernie Tamosaitis, has few YouTube videos. But mention his name to great musicians in New York and they are great enthusiasts of his playing.

If you should see either name in a concert, run to get tickets.