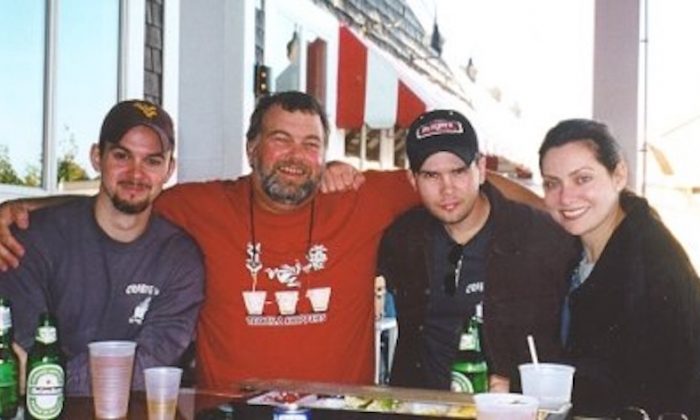 Continuing the Legacy of a Father and Private Investigator

Working as a private investigator can be a dangerous game. One man grew up with a father who was a legendary private eye, and now he and his brother are continuing his legacy.

Rob Holmes grew up in southern New Jersey near Atlantic City, and his father worked as a private investigator after serving as a New Jersey State Trooper for 10 years.

Holmes’ father Bob worked as a body guard for celebrities such as Diana Ross before he started working as a private investigator for large corporate brands in the 1980s. At age 12, Holmes would help his father by tagging along on raids and performing undercover buys of knock-off products.

In one case, a hostess had been stealing credit card information, and the money was going toward organized crime. While working this case, a mob enforcer Bob had known from his days with the state troopers was now after him.

Bob told the enforcer that he better not see him coming. The enforcer told him the same thing.

One day, Bob walked outside of his family home and saw the enforcer waiting conspicuously in a red Corvette. Bob offered to take him to the mechanic in an effort to get him away from the family.

Bob drove with the enforcer, who was sitting in the passenger seat. Bob was a left handed shooter, and had his pistol in a shoulder holster trained on the enforcer.

They drove out to the middle of nowhere, and when the enforcer realized he wasn’t going to get the opportunity to kill him, he told Bob to pull over when they passed the first mechanic.

The New Jersey State Police called Bob, and told him to back off. In fact, there was a contract out on Bob, and the police said they would take over the investigation.

The young Holmes had come to understand the dangers of his father’s trade.

In the late 1980s and 1990s, Bob began working on Canal Street in New York. His main client was Rolex, who hired him to find who was selling knock-offs and who was supplying them.

Holmes’s father had a nemesis named Binh Cam Tran, who was the head of the Vietnamese Mafia in New York. Tran was known as the “Godfather of Canal Street.”

Tran’s largest business was selling counterfeit Rolex watches, and Holmes’s father chased him for nearly a decade. He would go through Tran’s garbage, and would attempt to tail him.

However, Tran was an experienced criminal who knew he was being followed. He would never physically go to his locations. Instead he would send an underboss. He would also never take the same route driving home. The young Holmes continued to learn about the complexities of his father’s work.

Tran had put a $100,000 contract on Bob’s head, and they would find “dead or alive” wanted posters at some of the raids they performed.

Bob passed away before Tran could be apprehended, but his investigation ultimately led to Tran’s arrest.

Holmes was living in Los Angeles, and was pursuing a different career in filmmaking in 1995. Little did he know, he would be drawn back into the family business.

He called his father to ask if there was a private investigating job he could take while going after his big break. Tragically, it would be some of the last advice he would get.

Bob had stopped working as much, and lost clients to competitors. One day, Holmes got a phone call from his sister, who told him that their father had taken his own life.

“I believe he always had one foot in since my mother. One foot in the grave,” Holmes said.

His father had helped him get a job at a firm called National Trademark Investigations. Holmes had learned a lot of lessons from his father, and realized he was good at what he did.

He learned to never force the evidence to fit his own narrative, but to instead follow the evidence. His father had also taught him to never take a case without sleeping on it.

“A good detective has no idea what he’s looking for because if you think you know what you’re looking for you’re going to miss the one thing that you’re accidentally going to find,” Holmes explained.

After working at the company for seven years, Holmes left to start his own firm called The Holmes Detective Agency.

He wanted to continue his father’s legacy.

Holmes’s specialty is intellectual property theft and anti-counterfeiting, and he later changed the name of his company to IPCybercrime.

One of Holmes’s biggest cases involved his own nemesis, known as the Beverly Hills Purse Queen. At her height, she was making $300,000 a month off of counterfeit purses.

In one instance, he received a floral funeral arrangement with a card that read “Sorry for your loss.”

“It was like ‘catch me if you can,’ but scarier,” Holmes said.

Every time he tried to locate her, she was gone. She had been following herself on the public access docketing system, so every time something was filed against her in court she was alerted.

After three years, Holmes finally caught her after she was arrested for beating her husband. Interestingly enough, the two are now friends.

Holmes and his brother Jason also handle online threat cases. In one instance, a teenager had posted on a message board that he was going to shoot up his school and how he was going to do it.

Holmes had a local investigator and the police visit the home, and the teenager admitted everything. He said he had been bullied. He also admitted that he had a gun, a map of the school, and an accomplice.

Despite the challenges and the danger of Holmes’s job, he finds his work rewarding, particularly when he catches his man or woman.

“You’re getting paid to hunt people. It’s just fun. Every time I catch somebody I still have the same joy,” Holmes said.