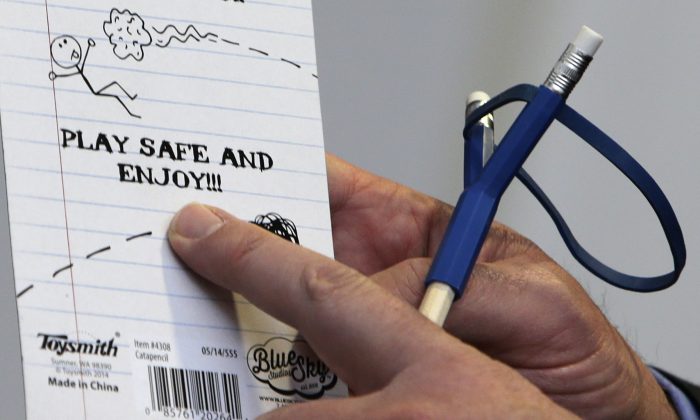 James Swartz, director of World Against Toys Causing Harm Inc., points out the term "Play Safe and Enjoy!!!" on the package for the Catapencil, a combination pencil and slingshot, at Children's Franciscan Hospital in Boston, Wednesday, Nov. 19, 2014. The consumer watchdog group has released its annual list of what it considers to be the 10 most unsafe toys as the holiday season approaches. (AP Photo/Charles Krupa)
Business

BOSTON—A bow that shoots illuminated arrows its manufacturer says can fly up to 145 feet and the “Catapencil” — a pencil with a miniature slingshot-style launcher on its end — are on an annual list of unsafe toys released Wednesday by a Massachusetts-based consumer watchdog group.

World Against Toys Causing Harm, or W.A.T.C.H., issued the “10 Worst Toys” list to remind parents and consumers of the potential hazards in some toys the holiday shopping season gets underway.

Organizers, who have been compiling the lists for more than three decades, said the toys singled out this year are representative of some of the typical problems they come across, and aren’t the only potentially dangerous products on the market.

“It’s not so much about the specific toys. It’s about the hazards,” James Swartz, the group’s director, said at a news conference at the Franciscan Hospital for Children.

Many toys, he said, continue to have the same hazardous designs, including small, detachable parts that infants can choke on; strings that can cause strangulation; dangerous projectiles; and misleading or confusing warning labels and instructions.

“There’s no reason, after all these years, we should have toys like this,” Swartz said as the group displayed each of the ten toys. “We shouldn’t be finding these things for manufacturers. They should be designing them appropriately in the first place.”

Dr. Penny Norman, who developed ScienceWiz’s “Bottle Rocket Party,” said she’s surprised the company’s kit, which includes rocket tubes, stoppers and yellow “caution tape” but not other necessary or recommended items, such as a bicycle pump or safety goggles, made the list.

She said the idea for the kits, which have been on the market since about 2005 and retail for around $15, came after doing homemade bottle rocket experiments with children at summer camps and after-school programs in the Berkeley, California, area.

“It’s a time-honored event for children,” Norman said of launching the water or baking soda-and-vinegar-powered rockets. “But it isn’t about children being set loose to play with them on their own. It’s absolutely about adults running a bottle rocket party event safely.”

The Toy Industry Association said American toy safety standards “remain the most protective in the world” and that the U.S. Consumer Product Safety Commission, the federal agency responsible for monitoring the safety of toys, “consistently” ranks toys among the safest of 15 consumer product categories commonly found in the home.

“As an industry that creates magical products for children, we hold ourselves to the highest possible standard of care,” the organization said in a statement. “Like WATCH, members of the toy industry are intent on assuring that the toys consumers bring into their homes are safe for their families. Unlike WATCH, we maintain our priority focus on toy safety every day of the year.”

Joan Siff, W.A.T.C.H.’s president, noted that there have been at least 17 toy recalls representing over 4.8 million units of toys in the U.S. and Canada so far in 2014. She urged parents to be extra vigilant during the holiday season, when W.A.T.C.H. says more than 65 percent of toys are sold.

“Remember: Toys are an embellishment on life,” Siff said. “They are not a necessity. If they can injure a child, they simply should not be sold.”