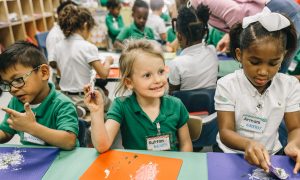 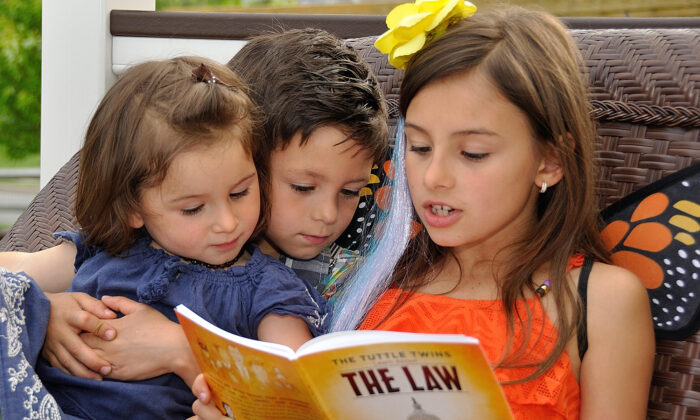 Connor Boyack: On Teaching Kids About the Free Market

Yes, your 7-year-old is perfectly capable of understanding how the Federal Reserve works.

The Tuttle Twins series is a set of 10 books geared toward children around ages 5–11, illustrating various ideas around the free market, economics, and civics. Economics classics like F.A. Hayek’s “The Road to Serfdom” and Frédéric Bastiat’s 1850 essay, “The Law,” get distilled into colorful adventures where the twins, Ethan and Emily, learn about central planning, entrepreneurship, individual rights, inflation, and even the golden rule, of how we should treat others the way we want to be treated.

“Children love stories, and they love exploring the world they’re a new part of. When you introduce economic ideas in these contexts, they’re enjoyable, helpful, and relevant,” says Connor Boyack, the author of the book series. “That’s why the Tuttle Twins books have sold over half a million copies in just the past few years, and it’s why a thousand families signed up for our new curriculum within the first month.”

Boyack is the founder and head of  Libertas Institute, an independent nonprofit think tank advancing freedom and policy in Utah.

The project began when his two children were 4 and 6, and Boyack would come home wanting to tell them what he did at work that day.

Boyack’s team has helped remove redundant policies for small businesses, worked against bills like ones increasing the cost of a government marriage license or creating a government vehicle safety inspection program. The group also creates public awareness campaigns and lawsuits on the behalf of Utahns. They have an 82 percent success rate.

So Boyack took to Amazon.com to look for children’s books, hoping there would be something about private property, or individual rights and liberty. He found nothing.

After about two weeks of frustration, he decided to practice what he preaches and tackle the problem in an entrepreneurial fashion. He decided to write his own books. He teamed up with illustrator Elijah Stanfield, who also has young children of his own, and the first book was such a hit they decided to create an entire series.

Boyack’s son and daughter became beta testers of the series, which hit 10 books this year, and they’re not an anomaly in enjoying them.

Parents have been writing to Boyack for years that they haven’t been able to find anything like the Tuttle Twins books, and that not only do their children understand these big topics they’re reading about, but they really do enjoy the books and reread them.

“Kids don’t see themselves as learning economics—they see themselves becoming more mature by better understanding how the world works. It’s a winning combination for my kids, and so many others’ as well,” Boyack said.

Now, Boyack is turning the series into an economics curriculum for children.

Boyack is also the president of nonprofit The Association for Teaching Kids Economics (ATKE), which is developing a curriculum to teach children economics.

Boyack’s own interest in economics didn’t develop so early.

“I didn’t learn anything about economics until college, where I was forced to take Econ 101. The class was insanely boring, and full of graphs and funky terms I didn’t care about. I didn’t do well in the class,” Boyack said.

He’s far from alone in this respect, but realized years later that this shouldn’t be the case at all.

“This was a tragedy, because as I began learning about economics through self-study several years later, I realized that it’s a language through which we can express our interpersonal reactions, and better understand why people act the way they do,” he said. “None of this was introduced to me in my earlier years, so I want to make sure that other families can capture this higher vision and give their children a leg up in learning this stuff.”

⭐️⭐️ You love the books, now get the curriculum! ⭐️⭐️https://freemarket.tuttletwins.com ⬅ ⬅You'll love the new weekly material for children of all ages (and parents) to learn free market basics, together as a family! 📚🚀

Boyack is constantly asked how he takes these complex-sounding topics—some of which parents might feel they don’t understand well enough to teach themselves—and turns them into palatable and engaging stories where even children can understand the concepts. Parents, and older siblings, often learn along with them, because these topics aren’t touched on in most schools at all.

“The word ‘economics’ sounds pretty boring, but in reality, it’s super fascinating because it explains how the world works and how people interact with one another through the market—buying, selling, exchanging, each of us pursuing our own interests,” he said. “Knowing economics can really position you to be successful in life and have a sense of curiosity about the complex and amazing world around us.”

Boyack plays to their curiosity, and, in a sense, “translates” these dense economic texts into one or two ideas and a fun story.

It helps, perhaps, that he’s not an economist by training.

“I’m not a scholar, I’m not a lawyer, I’m not an economist. I’m just a guy who loves these ideas and has spent a lot of time reading about them,” Boyack told podcast host Alan Mosley.

Before Boyack started the Libertas Institute, he’d campaigned for Sen. Mike Lee (R-Utah) in 2009, and the small team he worked on helped Lee get his nomination. But he soon realized that on the federal level, for every one win you also net tens or hundreds of losses. The average person makes close to no impact on the federal level, on which the news typically centers.

But if you focus your attention on local and state politics, it’s a completely different matter, Boyack found. Not very many people engage in local politics, where there is a low barrier to entry, and it’s not hard at all to make your voice heard.

“If everyone watching the news … spent half of that time getting involved at the local level … we would see a revolution,” Boyack told business coach Jason Stapleton on his podcast.

So in 2011, Boyack started the Libertas Institute. This eventually led to the children’s books, then ATKE, and then a podcast “Society and the State.” He’s also a public speaker, the author of 17 books, and a beekeeper (as the Tuttle family is).

By focusing efforts on a state level, Boyack has also been able to affect national change. Utah passed the nation’s first food truck freedom law (there is also a Tuttle Twins book about the food truck business, based on Henry Hazlitt’s “Economics in One Lesson”), and other states have been able to look to Utah.

In advocating for the free market, Boyack has seen that in principle, most people support a free market, but in practice, interests often butt heads, and when it comes to legislation a lot of regulations really stem from inertia created by lack of understanding.

“People generally like to think that they support free markets, until there’s an opportunity to protect their turf or preferred interests,” Boyack said. “And that’s the biggest challenge—getting people to be consistently supportive of removing government obstacles, even when it might be tempting to throw an obstacle in a competitor’s path.”

The spike in socialism’s popularity in the past few years has been driven by similar motivators: fear, laziness, and lack of understanding.

“What isn’t popular about wanting free stuff? It’s easy to rally support by promising inexpensive or free goods and services,” he said. “But it’s disingenuous and evil, because it masks the true costs of these policies and programs, and the reality that everything given to one group of people is forcibly taken from another.”

Both of Boyack’s nonprofits work to educate, on various levels, from 5-year-olds to policymakers.

“We’ve learned a lot having published 10 Tuttle Twins books about these ideas, and now, we’re producing regular content for children of all ages to learn the nuts and bolts about how the economy works, and why it matters to them—even at a young age,” Boyack said.

After 10 books, Boyack is setting aside penning new Tuttle Twins books for a while, but he’s seen increasing interest from parents, and his children have demonstrated that once they’re interested in a topic, one book just isn’t enough.

The Tuttle Twins books come with activity workbooks with PDF worksheets for children of different ages, and ATKE now puts out a weekly lesson plan that parents can use to learn and teach various economic ideas. The concepts include scarcity and value, entrepreneurship, wealth creation, and others.