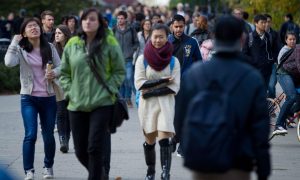 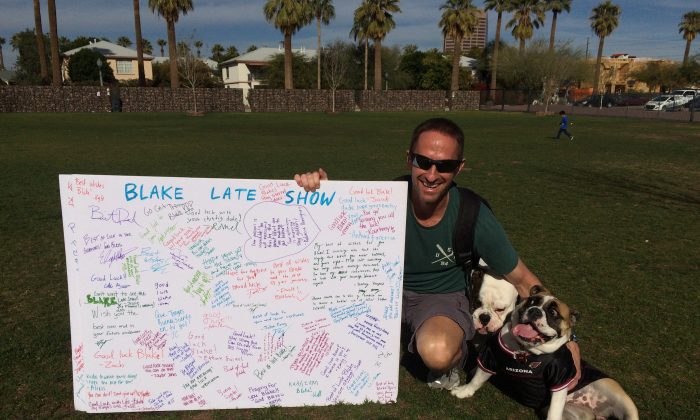 Ron Blake with one of his poster boards. He's been on a journey throughout the country to remove the stigma around mental illness. (Courtesy of Ron Blake)
People

Connecting With People to Remove Stigma of Mental Illness

Surviving a sexual assault can leave deep psychological wounds, and these scars can often manifest in the form of Post Traumatic Stress Disorder. Unfortunately, PTSD and other mental health disorders are frequently surrounded by stigma. This man went through a horrific attack, and is now traveling around the country to confront the stigma of mental illness with art.

On Dec. 21, 2011 three men entered Ron Blake’s home in Phoenix, Arizona. Blake was asleep when he heard people in his apartment. When he confronted the men, they appeared to be drunk. The men, one of whom was Blake’s partner, held him down and sexually assaulted him. One of the men nearly threw him over the seventh floor balcony.

Blake was able to break free, and he called the police. However, the police were no help at all and no physical evidence was taken. Blake even tried to confront his attackers, but they all denied the incident took place. As a result of the trauma, it would take Blake a few years to process what had happened to him.

“I just started shutting down shortly after that, didn’t talk about it,” Blake told The Epoch Times.

Over time, Blake began to recognize two symptoms of PTSD: Isolation and anger. He withdrew from family, friends, and didn’t want to be around people. He also had some explosive moments. There was an instance where he dropped his car keys, and then threw a glass against a wall.

Blake beat himself up because he didn’t know what was happening to him. On May 15, 2014, he was reading an article in Time Magazine about sexual assault on college campuses, and it sank in that he had been assaulted.

Blake started opening up about his attack, and about a month later he began seeing a therapist. He was ultimately diagnosed with PTSD.

Despite his treatment, on Nov. 2, 2015 he had reached his limit. He found himself in his apartment with pain pills in his lap, and was ready to take his own life. “The Late Show with Stephen Colbert” happened to be on, and Blake laughed.

“It was just this sheer simplicity because I paused this show and I just thought I don’t know that I can take my life. There was just something as innocent as laughter, and I thought this is either God or the universe telling me that it’s not my time,” Blake recalled.

It was that experience that was the turning point in Blake’s life. He wanted to be on the “Late Show with Stephen Colbert.”

One day he was at Staples to buy paper when he saw a display of giant foam poster boards. He found himself staring at them, and an employee asked if he needed help. That’s when he asked for all of them.

It was at that point where he decided to embark on a journey to meet strangers, share his story, and have them share their stories of trauma and mental illness in return.

At first, he thought they would just sign their names on the poster boards. However, the strangers then began to write about their own experiences.

Blake has met a variety of people throughout his journey. He’s met a survivor of sex trafficking who shared with him how lonely she is. He met another woman who was sitting next to a fountain by herself. She had been struggling with suicidal thoughts; he told her about his journey, and they had a therapeutic discussion. In fact, she told him she had been on her way to take her own life before she had spoken with him.

“She said to me she was going to be okay. She said that moment changed her,” Blake recalled.

Throughout Blake’s journey he’s had people hug him, give him high fives, shake his hand, and even kiss him on the cheek. Throughout his odyssey, he’s learned that people are human and show the best of themselves once the vitriol of politics and ideology are stripped away.

Over the last 1,227 days, 28,329 people from 11 different states have written their stories on 434 boards. People have shared in 89 different languages in 27 different colors of Sharpie markers.

Blake is still considering his options, but he hopes to feature the poster boards in a galleries for a traveling art show.

“That’s how everybody heals. By talking about it. If you never talk about it you’re never going to get better,” Blake said.