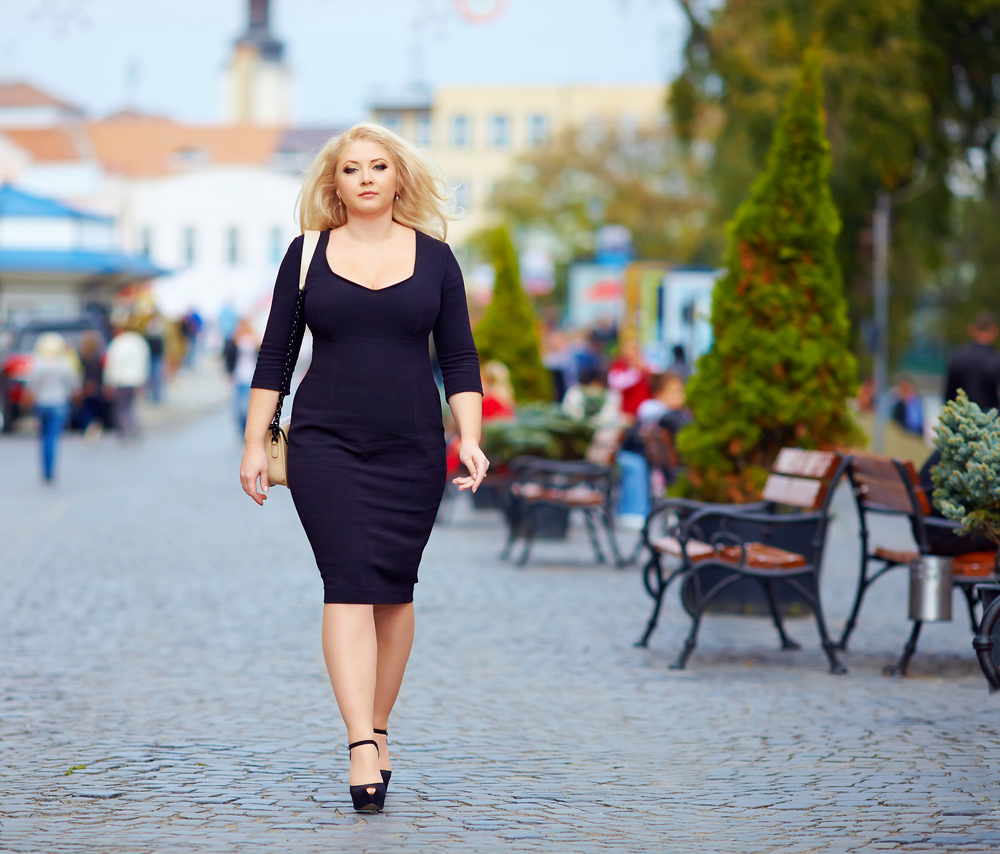 Confident plus size woman walking down the street. (Shutterstock)
People

Congratulations! You Are a Size 0!

It is a sad fact that many want to ignore. The more we work out, the more “diet foods” we eat, the fatter Americans are actually getting. A chilling documentary released this summer “Fed Up,” narrated by Katie Couric, highlights Americans losing battle with the bulge and indicts government capitulation to the agricultural industries that make the most fattening food. According to the New York Times, the average American man now weighs 194 pounds and woman, an astounding 165 pounds. In 2002, the average American woman weighed 153 pounds and in 1994, 147 pounds, say Florida State University researchers. Does anyone see a trend?

Nor are pounds the only sign of the growing American adiposity: The average American woman in the 1950s had a 25-inch waist and today has a waist of 34 inches.

Not surprisingly, our growing girth is a big problem to the fashion industry. In fact, one industry captain was heard to comment that designers are no longer dressing American women but “upholstering” them. Overweight people do not rush to buy clothes, and when they do find themselves squeezed between the garment racks, they do not buy clothes that don’t fit or have an insulting size label. It is the same reason shoe stores sometimes leave the size off women’s shoes.

Enter size inflation, sometimes called vanity sizing, with its ego-flattering size 0 denomination. Size 0 is said to fit women who measure from 30-22-32 to 33-25-35 inches. But a little quick fashion research shows that those dimensions used to describe a Size 5! In the 1970s, those dimensions described a Size 10.

If anyone has a doubt about how size inflation has made us all thinner without losing a pound, go to a resale shop and try to try on the Jones New York Size 7 off-white linen pencil skirt. Prepare to be demoralized.

Men don’t scour resale shops the way women tend to do, but if they did they would likely be just as demoralized if they tried to try on the three-piece powder blue disco suit similar to the one John Travolta wore in Saturday Night Fever. Can a vest be left casually unbuttoned?

Many say baggy hip-hop fashions, low riding pants that sit on the hips, and stretchy yoga pants and leggings have enabled Americans to balloon in size without realizing it because their clothes still fit. Once upon a time, our ancestors called elastic waistbands “the Devil’s Playground” for exactly that reason.

It is often said that Marilyn Monroe wore a size 14 dress, a fact that is supposed to show that being “plump” used to be more acceptable than it is today. But it is just the opposite. Ms. Monroe rarely weighed as much as 120 and usually weighed between 115 and 118—putting her close to today’s size 0 category, no doubt.

No, the truth is that like cars, McMansion houses, food portions, and soft drink sizes, Americans are getting bigger every day—and because it is happening everywhere, few notice. Worse, the harder we try to lose poundage with low calorie foods, fitness centers, and personal trainers, the bigger we are becoming.

While people in industrialized countries other than the United States are also packing on the pounds, it is said that women in France have remained enviably thin. Why? Because unlike so many of us, they do not “diet.” They eat what they want, including higher calorie foods or even high fat diet foods but not in our super-sized American portions.

Meanwhile, U.S. “dieting” is doing a lot more for diet food manufacturers and fitness centers than the American waistline—as the fashion industry wonders where to go after size 0.

(*Plus size woman photo via Shutterstock)