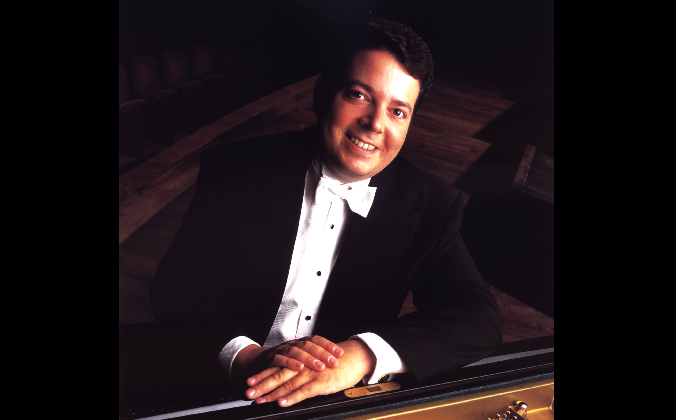 Conductor Andrew Litton on Livening Up the Music of NYC Ballet

“There’s nothing more exciting than that,” said Litton, who came on as the music director for New York City Ballet a year ago. Since then, it has been a joy for him to find the little tweaks and tune-ups that liven up the orchestra in tandem with the dancers, to find the little moments that turn something good into something extraordinary.

“It’s fun for me to take on what they’re giving me, but then realize that for years they’ve been playing notes short that aren’t short and aren’t supposed to be short,” Litton said. “So it’s fun for me to come in and take things back to the studs, the 2-by-4s.”

Some of the orchestra members have been playing this repertoire for literally decades, Litton said, and it’s easy to fall into “default mode.”

But the players’ attitudes are wonderful and the energy is positive, he says. No one is tired of the repertoire, not even after playing a full run of 48 Nutcrackers.

“I always say that music isn’t music until there is an audience,” Litton said.

He has always felt it a tremendous responsibility to be a performing artist. People, often paying a lot of money, are giving you two hours of their lives, and you have the opportunity to do something utterly uplifting.

“That’s the power of music: You have this incredible, potentially uplifting, spiritual, and entertaining form of an experience, and it is powerful,” he said. “To be a practitioner of this great art form is a privilege and a huge challenge, because it is an enormous responsibility.”

The music has to live, he says. There is always someone in the audience who hasn’t heard a piece before, and even for the people who know the music really well, it’s an opportunity to hear something in the music they haven’t before.

“It’s what’s amazing about classical music, that there are so many layers in a really good piece that you never get tired of it,” he said.

Since the age of 10, when he saw a particularly dramatic and descriptive Young People’s Concert at Lincoln Center, Litton has been passionate about being a performing artist.

“I wanted to do this, to jump up and down like Lenny [Bernstein, then conductor at New York Philharmonic],” Litton said. “I said, ‘Mom, I want to be a conductor,’ and she just rolled her eyes, because up until that morning I wanted to be a fireman.” But he was serious.

Litton came to the NYCB as an orchestral conductor (who still holds many additional posts) with a great love for the staple ballet pieces and the multitasking skills of an opera conductor.

“Opera was my first love,” Litton said. Once Litton had made up his mind to be a conductor, his godfather, Richard Horowitz (who is remembered as the Metropolitan Opera timpanist who held the position for 66 years), brought Litton into the orchestra pit whenever time allowed, between homework and piano lessons. At the age of 10, he was sitting there with the orchestra, observing the different sounds under the batons of different conductors, receiving an amazing education.

With opera, you’re driving the orchestra while minding their balance against the vocalists, staying on the lookout for prop mishaps that lead to missed cues, watching the opera stars do crazy things while trying to still sing, dealing with enormous distances between singers and the pit, and so on.

“There’s no aspect of an opera, ever, that just goes. You have to stay in constant control and predict that something’s going to go wrong,” Litton said. But that is one of his favorite things about it.

Little surprises him now (save for when he lifts the baton to start a symphony and the orchestra instead bursts into “Happy Birthday”) and he has learned that if you are ready for a little musical madness, these risks and surprises can be great fun. It keeps the music alive.

Seeing the Music, Hearing the Dance

Litton says he obsesses over recordings made with the composers’ input, and one of his missions has been to bring back the lush, romantic lyricism to orchestral pieces, some of which have been played in a leaner style over the years.

“My big thing is to get orchestras to play romantic music where the note lengths are respected, because by the time you got to the Romantic period, composers were able to write note rests where they expected silence,” he said. “Let’s remember where we come from and not lose sight of what the Romantic era did to performance practice. It actually did go for long lines and beautiful, lyrical melodies.”

His approach to researching the ballet repertoire was the same. He combed through the ballets recorded when choreographer George Balanchine was still with the NYCB because “that was it, that was the tempo.”

He caught things that have shifted over the years. “When we’re doing Symphony in Three Movements (Stravinsky), they were lowering the curtain too soon. … [During] the performance I watched from the ’70s, it’s coming down basically with the music,” Litton said. So he asked to delay lowering the curtain, and it made the ending even more dramatic.

“Because Balanchine does this amazing thing at the end of Symphony in Three Movements. The music is incredibly frenetic, rhythmic, and going-going-going,” Litton said, “but he suddenly has everybody on the stage freeze—and then the ballet ends, frozen, with the curtain going down but the orchestra still going. By just delaying the curtain, it kept the audience’s attention all the way to when the music stops, rather than breaking sooner.

“They moved it about four seconds later and it made all the difference in the world. … Little things like that, I think, change the dramatic temperature of the performance.”

With world-class dancers and musicians playing some of the most beautiful scores ever written, it becomes very tempting to push and pull the drama of the music whenever the dance allows for it.

“The dancers are just such a force of nature, driven and passionate about what they do, and it trickles down to everybody,” he said.

When NYCB was putting together Balanchine’s “Who Cares?” set to 16 Gershwin songs, Litton noticed that principal ballerina Tiler Peck was finishing her solo (for the female dancer set to “Fascinating Rhythm”) just a hair before the end of a song.

“I was watching her doing this incredibly complex set of turns, whisking off the stage, and I realized she was getting there before I was, and I thought, what if, for the dancer, we speed up those last eight counts?” Litton said. This was not what was rehearsed at all, but he approached Peck and she agreed, so he went and warned some key people in the orchestra to pass it on.

“I said, it’ll either result in a huge ovation or it’ll be a disaster, but there’s not going to be any middle ground because we’ll go for it. She said, ‘Sounds great’,” Litton said. “She goes whipping off into the wings and people go crazy. So there are even chances for me at the ballet to have a little musical madness.

“I don’t think we go from A to B the same way each time,” Litton said. “As long as everybody is ready for a possible eventuality, it can be really exciting as an interpreter. That’s what I’m testing the parameters of in my ballet pit.”

From the pit, Litton is high enough to see the toes hitting the ground. While he does not tailor the music to what is happening on stage, it’s important to have an awareness of that, he said.

In fact, some of the dancers are so musical, they’re actually conducting and don’t even know it, he added. There may be a slow lift of the leg in the tempo the dancer wants to go in, and Litton may take that as his cue for the upbeat to give the musicians.

Litton began his new position during the winter season last year, with “George Balanchine’s The Nutcracker” followed by a special performance of pieces he selected. And he is keen on making music suggestions to the choreographers and collaborating with composers.

One of the most fulfilling aspects of this post, for Litton, has been the repertoire.

In addition to the standard story ballets, the Balanchine repertoire is full of plotless or abstract ballets known by the music it’s set to, and the company regularly premieres new works.

Symphony in Three Movements, for instance, is a seldom-performed Stravinsky piece because, at 22 minutes long, it’s not a concert opener nor a finale, Litton said. “It’s such a masterpiece, and it never gets performed by orchestras because it doesn’t fit—I’m changing that, by the way. I’m bringing it to orchestras everywhere.”

Then there is “Sleeping Beauty” by Tchaikovsky, which Litton feels is probably the best ballet ever written—and also the most difficult because it is the most dependent on the tempo of the individual dancers. When NYCB performs it in February, there will be four casts, and one conductor paired to each cast, “sort of like custom conducting,” he said.

“Tchaikovsky is such a genius and it’s just him at his finest. It’s just the most descriptive and passionate and beautiful music he ever wrote, all in one big package.” Litton has even arranged his own suite of “Sleeping Beauty” and had it performed many times and recorded. “But that’s just 35 minutes—there’s two more hours to go! So I’m really looking forward to it.”