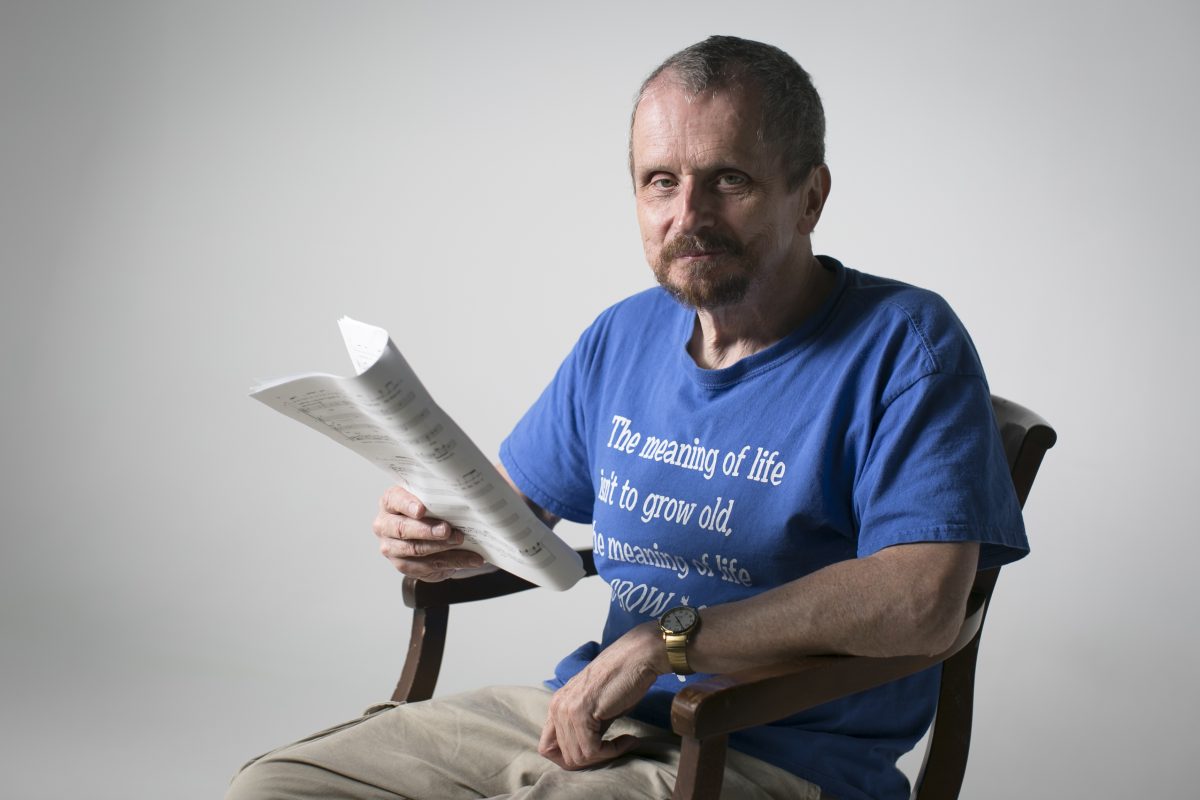 Composer William Vollinger writes deeply humane works: Hearing his song for soprano and clarinet, “The Child in the Hole,” we ache for a small boy who escaped the Holocaust by living three years in a dugout hole in Poland. To an unaccompanied baritone taking the role of Stalin from an iconic poster, we cringe at the dictator’s madness. And, in his choral piece “The Torrent,” the setting of a poem by Jenny Joseph, the life force of God’s majestic power pours forth but eventually trickles down to a stream of ordinary human kindness, and we first stand in awe and then melt in warmth.

For this composer, who anchors his life in faith, the classics have the power to humble us. The classics can help us “get beyond ourselves,” ourselves in the sense of our own egos, and remind us to respect those who contributed before us, Vollinger said in a phone interview on June 9.

“Such humility is good, as it doesn’t tear down but builds up, creates rather than destroys. Humility is, after all, the truth!” he said.

The truth of humankind’s connection to and dependence on God is found in all of Vollinger’s favorite classic works.

He listens to Handel’s “Hallelujah Chorus” as though it were an addictive drug: “It’s joyful in a way that tells you God isn’t purple, but golden!”

He likes that the trumpets wait before entering, and  “the sudden quiet of ‘the kingdom of this world,’ followed by a leap of a 10th, all those reiterated, rarefied ‘King of Kings’ and ‘Lord of Lords,’ and the jump-for-joys at the end!” he said in an interview in Fanfare.

Vollinger respects Bach most and considers him a consummate musician able to use both his right and left brains—both the spiritual and intellectual parts—to create. “Bach wrote God’s music,” he said.

Haydn, though, is his favorite composer. Funny, clever, original, Haydn’s characteristics remind Vollinger of himself. But, quite simply, Hadyn’s music makes him feel happy.

As a testament to his admiration, he set several of Haydn’s quotes about music, God, and the creative process to music in the piece “Some Things That Haydn Said.”

Of visual artists, his favorite painter is Rembrandt, whose work, he believes, is painted with agape love. Rembrandt’s strength was to paint “ordinary people, giving them an extraordinary inner beauty,” irrespective of whether they were black slaves or Jews—unheard of in Rembrandt’s time.

We can say that he believes whole-heartedly in George Balanchine’s famous saying, “God creates, I arrange.”

A graduate of the Manhattan School of Music, Vollinger teaches composition and music at Nyack College. Raymond Beegle and the New York Vocal Arts Ensemble won first prize at the 1990 Geneva International Competition for their performance of his “Three Songs About the Resurrection,” and won the 2005 Friends and Enemies of New Music competition. Hartshorn Recordings is releasing an album of several of Vollinger’s compositions in 2016.

Western art as a whole has lost the connection to God.

Vollinger traced God’s place in Western fields of the arts, era by era. Once, God was the center of all art. In the Middle Ages, artists left no names on their works because their intention was to glorify God, not themselves. Images were neither body-centered nor realistic; they idealized man to get at the spirit behind the flesh.

During the Renaissance, inspired by the Greeks, artists started the journey away from God-centeredness. They gave man center stage with realistic portrayals. In sculpture, for example, the artists created muscle-bound men, and painters used perspective to create life-like three-dimensional representations.

The best artists, however, embodied spirit in their art. In da Vinci’s “Last Supper,” all lines of perspective focused on Jesus’s right eye.

During the Enlightenment, reason reigned, philosophy bloomed, and great works of classical music emerged. But the eloquent logic of the philosopher’s pen devolved into the Great Terror’s guillotine.

Then, yet similarly, in the Romantic era, when emotion and genius were exalted, beautiful music and poetry blossomed. Genius, though, was ascribed to men, when its original meaning came from “genie,” a spirit who inhabited men. The excesses of this era led to lack of control and, in some cases, the insane asylum.

By the 20th century and with the rise of modernism, nothing at all could be found in the center. In paintings, objects were broken up and rearranged to break perspective. In music, whereas the octave’s diatonic scale with unequal intervals between pitches lent it gravity and notes wanted to fall back toward the center, with the key, in modernism’s 12-tone scale, all intervals between pitches are of equal weight and the center disappears.

Although Vollinger admits that much of modern art and music has “negated as much as created a kind of anti-creation,” he holds that God shines through nonetheless, even when the artist doesn’t acknowledge it.

Dmitri Shostakovich was an atheist who composed in Soviet Russia, yet Vollinger hears God particularly in the slow movement of his Symphony No. 5, written during the Siege of Leningrad, the most devastating event of World War II.

If humility is our true state, then pride, always a danger for artists in connection to their work, can take an artist away from truth.

Pride may make artists demean and criticize another’s work. Here, Vollinger quotes Michelangelo: “You can never be pleased with another man’s work, for there is no man who resembles you, nor one to equal you.”

Thus, pride gets in the way of artists seeing the bigger picture, the bigger truth, that each artist has something different to contribute.

“Every artist has their own things to share with whatever portion of humanity encounters them, but the tendency toward egotism excludes benefiting from someone else’s work,” he said.

Vollinger speaks of fear and pride as flip sides of the same ego issue. Art for the sake of ego can damage the artist. As Leonard Bernstein approached the end of his life, he bemoaned that he was not as great as Mahler. And Vollinger says that his own fear of being unoriginal drove some decisions in his early years of composing.

When Vollinger has been afraid of the limits of his own abilities, “How can I think I can match Bach?” he remembers that God made Bach. God made Rembrandt.

“No matter how good I am, I didn’t create myself,” he said.

The classics “remind me that I’m not the only one entrusted with such a gift, and that I can develop that gift from learning from the past to create in the present, even when I, from observation and even imitation, choose to do things differently for a GOOD reason,” good in the sense of doing good.

As Haydn said at his last public appearance in 1808 in response to a standing ovation, “Not from me, but there above comes everything.”