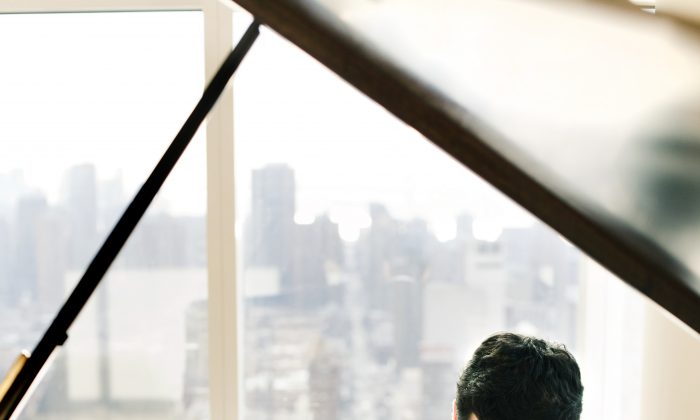 NEW YORK—Pianist and composer Michael Brown is a storyteller.

During a recent recital, he performed a polished program weaving together a web of fugues by Mendelssohn, Beethoven, and Bernstein, as well as his own compositions, with a delivery that conveyed his love for Americana alongside the classical form. In fact, even his playing of classical pieces sounds a bit folksy. Certainly, his presentation managed to connect one piece to another, as an unfolding narrative, even though the separate pieces might have had little in common in terms of an actual storyline.

Brown’s earliest musical influences were Mozart, Billy Joel, and the folk singer Raffi. He was introduced to their work as a toddler, and it put him firmly on the path of making music.

He began learning the piano at a young age, and composing on his own. His piano teacher on Long Island, who happened to be a composer as well, encouraged him, putting aside a bit of time at the end of each lesson to work on Brown’s compositions.

“It was another angle to learn and process music, another creative outlet for me, and I became more and more serious about it,” he said. “Now, it’s an equal part of my life.”

As a performer, Brown sees himself as a vessel for telling the composer’s story, making it intelligible, exciting, and cohesive in recital. Composing, for Brown, is about coming up with his own stories.

“It’s an amazing process from the conception to the work, the finished product, even though I never think anything is really finished,” he said.

“Usually when I start, I’m not prepared to start. An idea hits me in some random place—in a park, or on a bus or a plane—and I’ll make some sketches, make some notes, and then I’ll sit down and work.”

Every piece is like learning the process all over again. “There’s no, ‘Oh, I’ve done that before so I know that works,'” he said. “I feel like there is constant discovery with what I do.”

“Everything is immense puzzle-solving in my brain. … It’s an immense challenge.”

Listening to one of Brown’s pieces, you may not have the same picture in mind as he did, but he hopes it will take you somewhere interesting.

Many have taken notice of Brown as a composer-musician; he was a winner, among others, of a 2015 Avery Fisher Career Grant and has been commissioned by musicians for chamber festivals and recital debuts.

Deep Into the Music

Brown is also on the cusp of an international career as a pianist, as noted by Sir András Schiff, who featured Brown in a curated series of rising stars at the 92Y and invited him to join his “Building Bridges” series with recitals in Berlin, Frankfurt, Florence, Milan, Antwerp, and Zürich. Brown regularly performs solos and concertos as wells as duos and trios with violinist Elena Urioste and cellist Nicholas Canellakis.

“The best concerts I’ve been to are the ones where, at the end, you feel like you’ve been on some really emotional journey,” said Brown. “People say, ‘Oh, classical music is so relaxing and pleasant.’ For me, it’s the exact opposite! The most fulfilling concerts are the ones where I feel exhausted at the end. ‘Wow, that person just tired me out in the best possible way.'”

To do this, Brown feels the musician “needs to really go inside themselves and learn a lot about themselves, and get to a deep place with the music where they’re not inhibited by anything else.”

And when the musician can do that, a concert becomes a unique triangle between the audience, the performer, and the music itself.

“The performer has this special time, when time stops,” Brown said. If they do it well, that is. “It’s quite difficult to latch onto, but when a performer can do it, it can be really, really thrilling.”

One can interpret the narrative of a piece from precedent and historical record, but ultimately the musician is understanding the story the composer is telling one way, and then conveying it to the audience, who may receive it another way. “The performer is a vessel, sort of a tool there to convey the experience,” Brown said.

“The individuality is important, but it’s most important to convey the story [of the music] to the listeners and take you on that journey, though how they do it is completely individual. … That’s a constant thing I think about.”

“It takes a lot of practice and zen meditation,” he said, laughing.