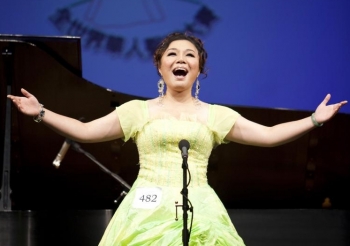 This third annual bel canto competition is part of a series of nine held by international satellite television station New Tang Dynasty Television, whose mission is to promote traditional culture through the arts according to its charter.

“The competition is meant to introduce the Chinese language to the vocal community,” said judge Yang Jiansheng, a critically acclaimed alto who began her career with China’s Central Philharmonic Orchestra and later studied with Italian operatic masters.

Since Friday, elite vocalists from more than 10 countries gathered in the Gerald W. Lynch Theater at John Jay College, performing one song of their choice for the preliminary round. For the semifinal and final rounds, contestants were required to perform two songs, again, of their own selection. At least one of the songs must be sung in Chinese, and finalists must not repeat any song from a previous round.

The panel of judges announced the recipients of gold, silver, and bronze awards in the female and male divisions, with cash prizes of $10,000, $3,000, and $1,000 respectively.

“I can’t believe it,” said Soprano Geng Haolan from China, after becoming the gold award winner of female division.

“This vocal competition is so different from those in China, because it promotes pure, traditional musical forms. In China, in order to ascend in a vocal competition, you need to have money and connections. I was often eliminated from those competitions in the preliminary round because my family did not have the money,” said the seven-year singer at the award ceremony following a show given by the renowned Shen Yun Performing Arts, a New York-based Chinese dance and music company, in Westchester, New York.

All pieces in the competition were performed in the bel canto style, which originated in 18th and early 19th century Italy and is recognized for its flexibility in the use of vocal range.

“Nowadays, many people emphasize more on quantity and speed rather than quality. Yet if this trend goes on, many valuable things, such as culture, will be gradually lost. And that will be a pity. So I think the nine series of competitions [hosted by NTD] is very valuable, because these will retrieve the nearly lost culture,” said Soprano Min Kai Yi from Taiwan, currently studying choir conducting and vocal studies at Maastricht University in Holland.

Soprano and pianist Chen Ke, bronze award recipient of the competition, has attended various international music competitions previously. Among all of them, the judging in this particular vocal competition is “very fair.” The others competitions “always involve politics” in judging she said.

“I don’t think [this competition is] only focusing on techniques or anything like that. I think they are looking for artists—real artists,” said Chen, who will attend graduate school at Manhattan School of Music after six years of singing.