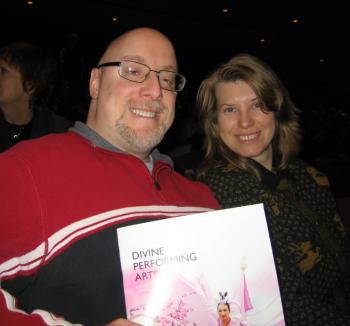 TORONTO—“This is definitely something that everybody needs to come and see,” said Mr. Jacobs during the intermission of the Divine Performing Arts show at Toronto's John Bassett Theatre on Sunday.

“This is very well done, I’m enjoying this very much,” he said.

Mr Jacobs is the owner and president of a company that holds a number of other companies. Among them are businesses that do technology work in Asia with operations in the U.S. that work with pharmaceutical companies.

He particularly enjoyed the piece Heaven Awaits Us Despite Persecution.

“I enjoyed the entire story of persecution and heaven. If I hadn’t already read or heard the story, I would have figured out what was going on,” he said.

The dance tells the tale of a father who is persecuted for practicing Falun Gong, a spiritual discipline banned in China. The fantastic scenes that ultimately unfold in this piece present a message of hope and bespeak of a longstanding Chinese belief that good people are ultimately rewarded, even if not in this lifetime.

“It was very telling of how badly the people are being persecuted in China over their beliefs,” Mr. Jacobs said, adding that he was aware of how the Chinese regime has vilified the practice.

“The dancing was amazing. The Tibetan dance (Dance of the Snow-Capped Mountain) was very, very elaborate and very well choreographed.”

The dancers in this piece vigorously celebrate the joys of the Tibetan Steppes as they spin, stomp, and step in an extravagant gesture of welcoming. Long sleeves, sturdy boots, and colourful prayer beads capture the energy and character of the vibrant Tibetan people.

Mr. Jacobs was also impressed with the opening performance, The Five Millenia Begin.

In this piece divine beings assemble in Heaven to prepare for their descent to Earth, where they will impart the very gift of culture. Among them is the Yellow Emperor of Chinese lore along with his royal court, who take the stage following a thunderous welcoming.

“I had heard the story, I’ve done a lot of studying on Chinese culture,” he said. “I’m very fascinated with China’s history. I already knew something about the Monkey King and the legend of the Monkey King so it was a very interesting production that they did with the temptation of the Monkey King.”

The Monkey King Triumphs is based on a scene in Journey to the West, one of China’s most beloved classic novels written close to 500 years ago. The protagonist, a Buddhist monk, is traveling to India in search of scriptures, joined by an ogre, a pig, and the miraculous Monkey King. Along the way they are set upon by a demon that assumes the guise of a temptress.

“I knew about the legend of the Monkey King already, and the temptation.But I liked the whole way that they told the story and how they went about demonstrating this with the choreography to tell the story of how the Monkey King went on to defeat the evil.”

“The tenor was fantastic, I used to be a tenor. I sang in college and some afterwards. I am a very big fan of operatic singers and the tenor and the baritone’s voices were gorgeous. Very good selections. Very talented.”

Another of his favourite performances was Dance of the Yi. The Yi people are one of southern China’s largest ethnic groups, known for their passion for music and dance.

“The skirts from Yi—beautiful skirts—absolutely love that…. I’ve seen them in some of the stores of traditional clothing and I didn’t know what they were about. I like some of the colours in the costumes.”

Although Mr. Jacobs is already well versed in Chinese culture, he said such knowledge was not necessary to appreciate the show.