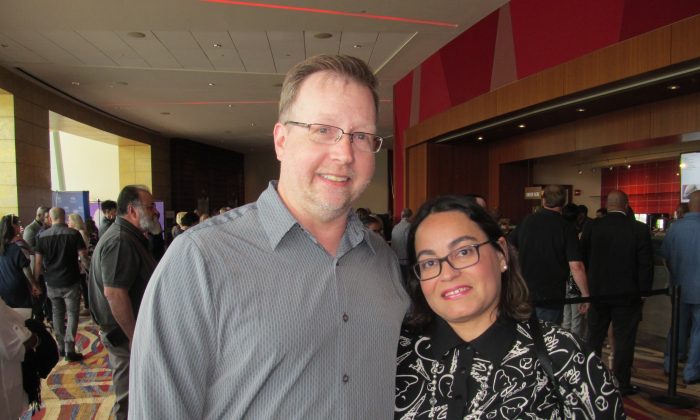 ATLANTA—Dozens of Shen Yun performers move in unison as they glide, flip, and spin during their dance vignettes, featuring classical Chinese dance and ethnic or folk dance styles.

These dance systems have been passed down for thousands of years in China, and are now shown to the world during Shen Yun Performing Arts’ annual touring seasons.

John Sambdman, CEO of a luxury charter bus company, was enthralled by the dance movements he witnessed after attending the performance with his wife at Cobb Energy Performing Arts Center in Atlanta, Georgia, on April 6.

“I wish I could fly like that, but just the way they move so gracefully, acrobatically is really impressive,” Sambdman said. “And they are very beautiful in their movements.”

Shen Yun is the leading classical Chinese dance company, founded more than a decade ago with a vision to restore traditional Chinese culture through the arts. Since then, the New York-based company has grown to more than six equally-sized touring contingents that this year will travel to more than 130 cities over four continents.

But it wasn’t just the dancing that amazed, the dazzling costumes also got Sambdman thinking.

“The costumes are colorful, wonderful, fantastic,” he said.

“I kind of wished we would live in a society where that kind of dress were more common, it would be more beautiful I think. Like the ancient China compared to communist China today, that would probably be more interesting.”

The music played by the live orchestra also left an impression on the Sambdmans.

“On the way out [of the theater] we were humming the tunes as we came out, so it is really catchy,” Sambdman said. “Very catchy and pleasant to hear, and kind of inspiring the mind.”

Each piece played the Shen Yun’s orchestra was composed specifically for the performance. The music is also unique, in that it blends elements from both classical Chinese and Western music, producing a familiar yet distinctive sound.

Besides the dancing, costumes, and music, Sambdman was grateful to learn about the richness of Chinese history and culture, especially the divine aspects of this culture—something we don’t see much of today, he said.

Traditional Chinese culture is deeply rooted in belief of the divine. For thousands of years, Buddhism, Taoism, and Confucianism shaped every aspect of Chinese society, including how people saw the world and behaved. Such teachings emphasize personal moral improvement and ensuring harmony between Heaven, Earth, and man.

Many of the artists themselves apply such standards to themselves through their practice of spiritual discipline Falun Dafa, also known as Falun Gong.

Falun Dafa is a meditation practice that has a set of teachings based on the principles, Truthfulness, Compassion, and Tolerance. Despite it being freely practiced in more than 90 countries around the world, Falun Dafa has been banned by China’s communist regime for two decades. Adherents in China are subject to a brutal persecution and have been imprisoned, harassed, tortured, and even killed.

Sambdman was glad that Shen Yun was bringing to light the suppression in China to the people of the world.

“I was encouraged to hear the basis of these artists’ beliefs is founded in a moral improvement, being kind to one another,” he said.

“I think that’s the message more people should hear and see.”

“Sadly [you] can’t see that in China right now. I hear they have a lot of persecution but I am glad it’s getting out now to the rest of the world.”

With reporting by Roland Ree.