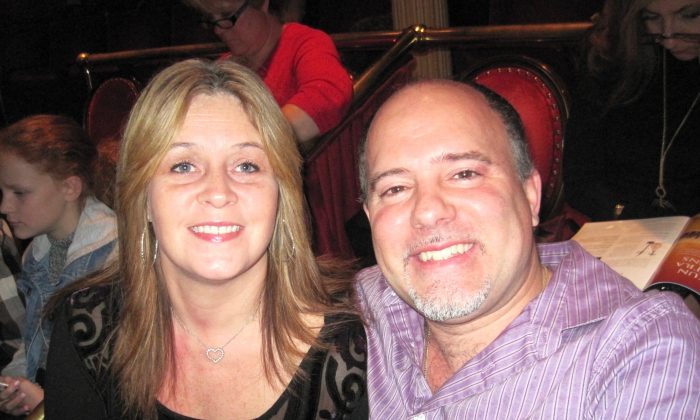 Mrs. Edessa Snyder and Mr. Kenneth Snyder at Shen Yun at the Academy of Music, in Philadelphia, on Jan, 9, 2016. (Tony Dang/Epoch Times)

PHILADELPHIA— Shen Yun Performing Arts evokes humanity’s deepest values, according to Mrs. Edessa Snyder. The company began in 2006 when “leading classical Chinese artists came together in New York with one wish: to revive the true, divinely inspired culture of China and share it with the world,” according to the Shen Yun website.

Mrs. Snyder said, “The divine—that’s so important, that’s the center of everything.”

A few years ago, Mrs. Snyder founded the community outreach company New Tradetions. Its mission is to reinvigorate morality, respect, and family values in a world sometimes inundated with negativity and antagonism.

Shen Yun Performing Arts, which showcases a traditional culture rooted in moral values, closely mirrors her own passions. According to the Shen Yun website, “China was once known as Shen Zhou, The Divine Land. This profound name describes a land where deities and mortals coexisted, and a belief that the divine transmitted a rich culture to the people of the earth.”

Mr. Snyder said Shen Yun “touched my heart.” Mr. Snyder saw in the performance far more than just the beautiful dance and music he had expected. “This is not just a beautiful presentation,” he said. Instead, the performance also demonstrated the struggle of traditional Chinese culture and beliefs to survive and continue to be passed down.

For Mr. Snyder, the importance of culture can’t be overstated. It “makes us what we are inside,” he said.

According to the Shen Yun website “Over its past 60 years of rule, the communist regime has treated traditional Chinese values centered on the idea of harmony between heaven and earth as a threat to its existence. And in its systematic campaigns like the Cultural Revolution, it has uprooted traditional beliefs and destroyed ancient treasures, bringing traditional 5,000 years of civilization to the brink of extinction.”

The culture is so beautiful that if they aren’t free to express it, then so many people are missing out.
— Edessa Snyder

Mrs. Snyder said the world needs authentic Chinese culture. “The culture is so beautiful that if they aren’t free to express it, then so many people are missing out,” Mrs. Snyder said. Everything the Shen Yun performers “have to portray when they’re dancing to the music is art. It’s beautiful, and it’s history,” she said.