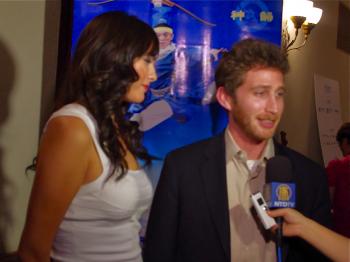 PASADENA, Calif.—The warm and sunny weather of Pasadena provided a beautiful environment for the Los Angeles premiere of Shen Yun Performing Arts New York Company. Even more beautiful is what went on inside the Pasadena Civic Auditorium.

Shen Yun clearly means a lot to theatergoers in California, as it completes its tour around the world. Audience members showed up in droves to see the opening night performance.

Mr. Kuch, a CFO at a Biotech company, stated: “I think it’s very strong, culturally. Spiritually, I get a feel for it. I work with a lot of Asian people, a lot of people from China. I’d be real excited to tell them about it, because now I’m seeing a different view of it, with the dancing and historical picture that is presented."

Ms. Estrada commented, “It’s my first time. I … honestly, cannot tell you how amazing it is. I love the attire, the clothes are so vivid. I love the whole screen on the background; it’s so amazing and it makes you believe that you’re actually in there, which is very, very fascinating and I’m having a great time.”

Mr. Goldhammer mentioned the contemporary piece about the ongoing persecution of Falun Gong in China and called it timeless. “My family was in Auschwitz in the Second World War. I found the scene where the teacher was taken away by the security forces very telling of a story that I was taught. In 1944 my grandparents and family were taken away for believing in certain beliefs. I found it very touching.”

He also said, “We hope that despite any opposition from the Chinese government, and any other forces around the world, that this show continues to perform everywhere, without any type of opposition. That we should all live in freedom and hope for better times.”

Other audience members commented on the beautiful hi-tech computer generated backdrops, the lavish colors, attire, and the important spiritual journey it takes you on.

A real estate developer named Mr. Messner said, “I feel a lot of different moods and feelings, from laughter, to sorrow, to sheer joy. I think it’s an insight into a China I had no idea even existed.”

The feedback from the opening night appears to be unanimous. If you’re in for an amazing journey, then Shen Yun is your ticket!

Shen Yun Performing Arts New York Company will be in Los Angeles at the Pasadena Civic Auditorium, April 28-30 and the Segerstrom Center for the Arts in Orange County, May 6-8. For more information, visit ShenYunPerformingArts.org