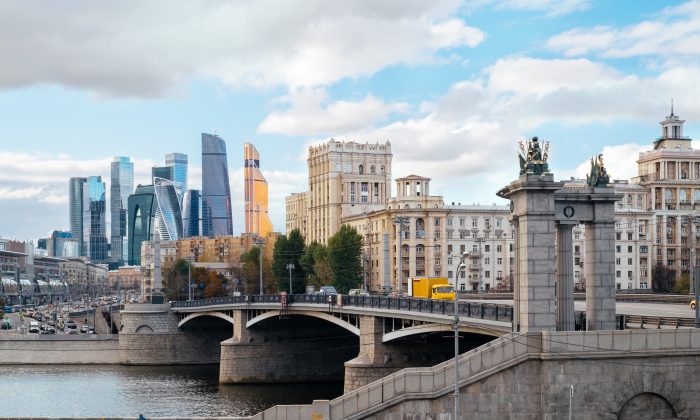 A landscape of Moscow architecture with the Borodinsky bridge, old classical buildings and modern city skyscrapers. (Dmitry Polonskiy/Shutterstock)
The Dead End of Communism

In the 1920s and ’30s, the “intelligentsia” in Europe and the liberal left in the United States became smitten with socialism and the grand Soviet experiment of a Marxist utopia. And although the strict worker-inspired economic version of Marxism in Russia collapsed in 1991, its cultural residue had long seeped into the art, music, and architecture in this country.

My communist stepfather and mother introduced me, in my early life from the 1950s to ’70s, to literature, music, arts, and architecture that all resonated with dogma and political rigidity. In regard to architecture, the primary example of this was the Bauhaus school in Weimar, Germany, which was founded by the socialist architect-idealist Walter Gropius in 1919.

Combining art and architecture, the Bauhaus school grew out of the emerging socialist narrative that, in part, disdained anything considered “bourgeois.” That idea translated into the elimination of unnecessary external ornamentation and the condemnation of the grand architecture of Europe.

This new approach to design was dubbed “progressive architecture.” In fact the leading architectural magazine of the era, Pencil Points, changed its name to Progressive Architecture in 1945 to align itself with the worldwide proletarian political movement.

Gropius’s utopian ideal envisioned the architects and artists all working together to develop a new design vernacular to help create the new workers’ proletarian paradise as first envisioned by Karl Marx, then Vladimir Lenin and Josef Stalin. According to Gropius, the architects would act as the workers’ cultural benefactors, as the workers were as yet “intellectually underdeveloped.”

Gropius’s revolutionary Bauhaus manifesto featured on its cover a woodcut print by Lyonel Feininger depicting a cubist cathedral labeled “the Cathedral of Socialism.”

The Soviet city planners enthusiastically embraced this physical depiction that reflected their ideals, and these resulted in the brutal, spiritless structures in East Germany and Poland, and throughout the Soviet Empire.

Unfortunately, what the Bauhaus brought to the world was the sterile “international style”—flat roofs, sheer facades, no colors—later amplified and contorted by its former adherents into postmodernist and other antiseptic variants. These knowingly and unknowingly brought the socialist design mentality to the present.

This politically forced vernacular swept through the receptive liberal academic institutions in America, beginning at Harvard University, where Gropius was installed as the chairman of the Department of Architecture. Later, the vernacular appeared at Chicago’s Armour Institute of Technology (later renamed Illinois Institute of Technology), where the final head of the Bauhaus, Ludwig Mies van der Rohe, was placed in charge. The result is evident throughout the world today: the dreary glass and steel boxes and their variants, in major cities throughout much of the world.

The sad irony is that the Bauhaus-inspired international style never worked out for the American worker as planned. But it did become quite desirable for the one segment of society that could afford to hire architects: the derided and ridiculed bourgeoisie.

Mike Shotwell is a retired forensic architect and author of the recent book “Immersed in Red: My Formative Years in a Marxist Household.”