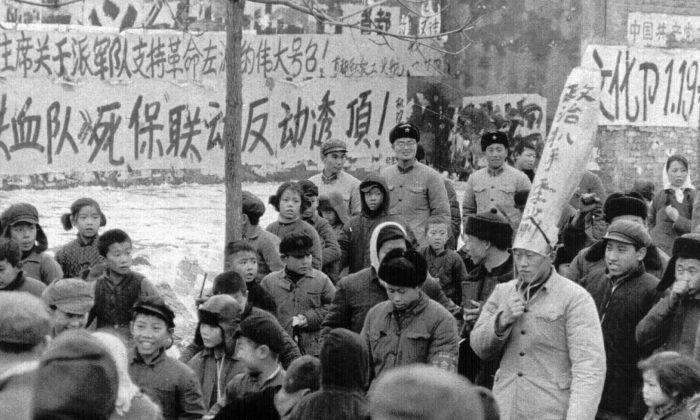 A Chinese official is paraded through the streets of Beijing by Red Guards on Jan. 25, 1967. The words on his dunce cap accuses him of being a "political pickpocket." During Mao Zedong's reign (1949-1977), many Chinese citizens and officials were accused of political crimes, and labeled "class enemies" and "counter-revolutionaries." (Associated Press)
The Dead End of Communism

Communism and Culture: Death by Epistemology

With 68 percent of all Americans believing that Adolf Hitler killed more people than Josef Stalin, with only a little over half of millennials considering communism to be a problem, and with American youth recently showing an interest in socialism, public opinion has undergone significant changes in recent years. The Epoch Times believes it’s worth examining the impact of communism—on the arts and culture today and through history—in order to understand these developments better.

Probably the most disastrous effect of Marxian communism on cultural life arose from its epistemology. Communism makes ad hominem argumentation—attacking the person rather than arguing against their position—the principal form of inquiry, thereby denying the possibility both of human freedom and of rationality itself. It is not surprising, then, that for Vladimir Lenin, the most important question was always who does what to whom. Everything boils down to a matter of power.

In “A Contribution to the Critique of Political Economy,” Karl Marx said that “it is not the consciousness of men that determined their being but, on the contrary, their social being that determines their consciousness.” And he also said that their social being is determined by their economic interests. In other words, men always think what it is in their economic interest to think: They are but mouthpieces for their money (or lack of it). Tell me what a man has, and I will tell you what he thinks.

There are two possible interpretations of Marx’s dictum: that it is contingently true, or that it is necessarily true.

If taken as a sociological or psychological statement, there is no doubt an element of truth in it. People often do seek to defend their interests by rationalizations (though they also have other than economic interests to defend).

If it is taken as a necessary truth about human thought, however, it has disastrous implications. Disagreement necessarily becomes enmity—indeed, of the worst type—since class is irreconcilable until such time as all classes are abolished or subsumed by the working class. Once that happy state has been reached, there will be no more disagreements because the social basis for disagreement will have been eliminated.

This is preposterous nonsense, of course. It certainly does not explain how two archetypal bourgeois, Marx and Friedrich Engels, one of them a factory owner, came to believe it. But once accepted as being true, it inevitably lowers the tone of all discourse and, where it becomes official doctrine, leads to mass murder.

Everyone loves ad hominem arguments, which are an intellectualized form of gossip; but the intellectually scrupulous are aware of their danger. Marx, however, made any other kind of argument impossible. For those influenced by him, person X can believe proposition Y only because it is in his interest to do so. This is why Marx also thought that it was wrong that philosophers had only sought to understand the world, when it was necessary to change it.

Well, his followers changed it all right—as the tens of millions of dead could attest. They were the victims of epistemology.

Anthony Daniels is a doctor, psychiatrist, and author. His latest book is “In Praise of Prejudice.”