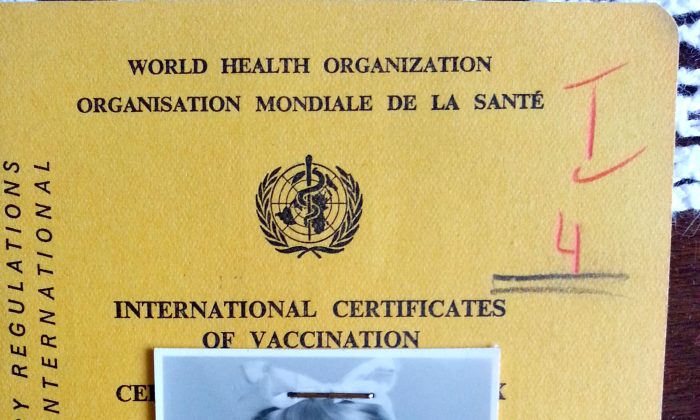 A photo of 2-year-old Mary Grabar on her inoculation records when she entered the United States. (Courtesy of Mary Grabar)
The Dead End of Communism

A recent Publishers Weekly newsletter listed “10 Essential Books About the Immigrant Experience.” None are about my kind of “immigrant experience,” nor have they ever been.

When I escaped Yugoslavia at age 2 with my parents, I was too young to remember what it was like to live under communism.

But even in the land of the free, in Rochester, New York, communism was a presence in our lives. It was the backdrop of conversations around the table on Sunday afternoons. I heard varying tales of escape from my parents, aunts, uncles, and their friends, told in my parents’ dialect of Slovenian. These are murky in my memory, for I was a child-eavesdropper. Men talked about running through forests to get across the border. My parents had fled in the middle of the night, with me on my father’s shoulders, wading across the river to Austria.

There were also tales of war: of soldiers coming to village houses demanding food, and something worse if girls were around; of so-and-so in the village, who had been tied up and shot.

I began a novel when I was 12. In it, the three of us—my parents and my toddler self—hid and slept in barns while bombs exploded all around us. But it was 1959 when my parents left Josip Broz Tito’s regime. My classmates and I did not learn this part of history in school.

Much later, I learned that my family had been sent back after we crossed the Austrian border. My aunt and uncle, who were in an Austrian refugee camp waiting for sponsorship, sent word about where to get help. They had gotten there by simply dropping their farm implements in a field near the border and making a run for it one afternoon, while the guards were chasing another couple.

We were refugees for nine months.

Somebody once remarked that my parents must be very conservative. No, repression breeds anxiety and apathy. From having to slaughter an illegal (above the quota) hog in the middle of the night, my parents learned anxiety. From knowing that communists might be eavesdropping, they learned political apathy.

I retreated into books and eventually earned my doctorate in English. I also write.

A few years ago, I wrote a novel based on my immigrant experience. My manuscript received flattering remarks about the writing from agents, but there was no “market” for it.

The publishing world, especially in fiction, is overwhelmingly liberal. They don’t want to hear about European immigrants who have fled communism.

Mary Grabar edits DissidentProf.com and is currently a resident fellow at the Alexander Hamilton Institute in Clinton, New York.