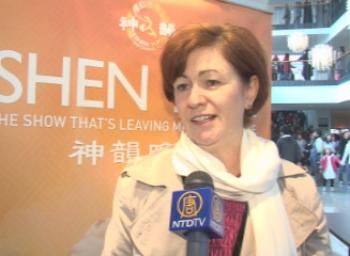 Communications Director: ‘We were totally overwhelmed’

Terry Hadley, communications director with the Vancouver Board of Trade, came to see Shen Yun out of curiosity. “It was an experiment for me,” she said. And she wasn’t disappointed.

“It was so interesting to see the way that the western music and the classical Chinese music were combined, and the show was absolutely spectacular. The costumes were beautiful. We were totally overwhelmed today.”

Mrs. Hadley was particularly impressed by the dance “In a Miao Village” featuring the Miao, one of China’s oldest ethnic groups, known for their elaborate headdresses and ornate silver jewellery.

“I think the girls with the silver bells, the folk dancing with the bell costume was absolutely wonderful. And the way that it all blends in with the music—absolutely fantastic,” she said.

It’s important to keep the folklore and traditions alive that go back thousands of years, she said, adding that “it’s wonderful … to see that whole tradition throughout the world.”

“In the western world here we don’t know those stories, so it was interesting to see.”

Shen Yun uses state-of-the-art digital backdrops that blend with the stage and coordinate with every aspect of each dance, including the colours, costumes, storyline, lighting, and choreography.

Shen Yun’s Vancouver run ended on March 28. The show will continue on to play in Calgary, Edmonton, Regina, Winnipeg, and Toronto.