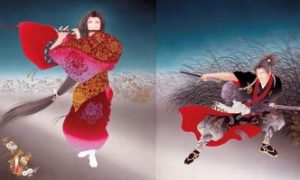 The aim of the New York-based Shen Yun is to revitalize traditional arts of China’s 5,000 year old culture—but that doesn’t mean there can’t be humor.

Ms. Braatz found “some cute things to it. For example the monks added some lightheartedness to it,” she said.

In Little Mischievous Monks, young Buddhist monks engage in play when the abbot is not watching.

In The Monkey King Outwits Pigsy, legendary Pigsy, a Falstaffian figure always eager to satisfy his appetites, flies back and forth from his mountain hideaway.

“It’s beautiful. It just is really, really great.” She said she admired the athleticism and the challenging spins and leaps, and “the staging of it is really nice.”

As two masters of ceremonies explain, gymnastics originally came from classical Chinese dance. They also describe the cultural context of each narrative or folk dance.

“I really do like the emcees coming out, telling you what you are going to see because it makes more sense in your mind, Ms. Braatz said.

Ms. Braatz said she was impressed by the colors of the costumes and backdrops, by the flow of the dancers and their costumes.