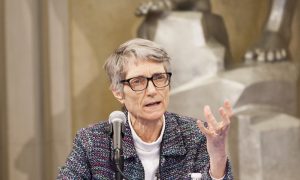 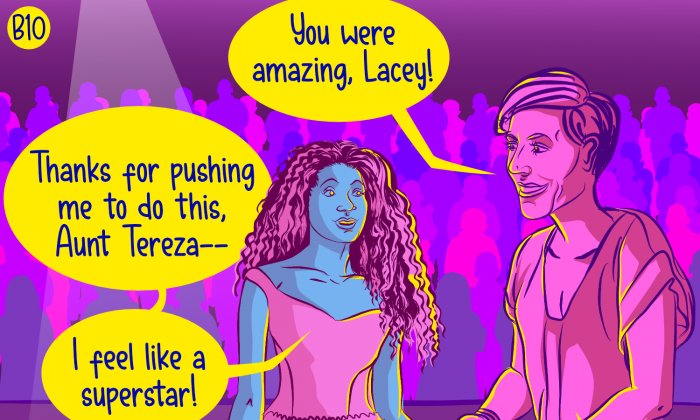 The final clip to the alternative ending of "Superstar." (Courtesy of Dan Goldman/Andrea Powell/UNITAS)
People

Many people don’t immediately think of comics as being educational, but they can be one of the best ways to reach young people. One comic book artist has teamed up with an anti-human trafficking organization to educate kids about the dangers, and how to avoid them.

Dan Goldman first developed an interest in comics and graphic writing around age 5, and learned how to read partly by reading comics. In high school, Goldman was in a record store and stumbled upon a comic book series called “Love and Rockets.”

“I just thought wow, you could really do comics about anything, and that was a big left turn for me about the sort of stories that I was able to tell myself, and it forged a different path for me I think,” Goldman said.

The fact that he could tell meaningful stories with pictures appealed to him and propelled him into a career as a comic book and graphic novel artist. Throughout his career, Goldman has covered a variety of topics in graphic form. He has written graphic works about political elections, the media, terrorism, and a variety of dystopian topics.

In 2014, Goldman wrote a graphic novel titled “Priya’s Shakti” that focuses on a protagonist superhero in India named Priya who is a survivor of sexual violence and fights against it.

“I was able to see for the first time that doing work that wasn’t just topical, but that was actually part of an activist pipeline where I was creating story tools for activists and organizations to use on the ground to help educate and bring awareness, that was a real big lightbulb for me. It was like the missing piece,” Goldman explained.

After giving a lecture at the University of Southern California, an ambassador for an anti-human trafficking organization called UNITAS named Daria Strokous approached him and told him that he would be a good fit for them. They discussed the power of storytelling, and how it could be an educational and engaging way to combat human trafficking.

Goldman seized the opportunity to educate and fight human trafficking through his work. He began working on a series entitled “Wolves in the Street,” which demonstrates how human traffickers try to lure people, and how potential victims can make smart, educated choices to avoid their tactics.

Andrea Powell is the founding president of Karana Rising, an organization that helps survivors of human trafficking through self-care, education, and employment. Powell joined the UNITAS team to develop the national curricular material to educate young people about human trafficking in schools, and also developed the scripts for the “Wolves in the Street” series with Goldman. She developed the stories based on the real-life accounts of trafficking survivors she has worked with.

Not only is this model cost-effective, it’s also a way to take back the internet. Human traffickers often entrap young people online, and by using the internet as a platform for education and prevention, anti-human trafficking organizations are leveling the digital playing field.

Powell explained some of the methods traffickers use to lure people. One way is to pose as love interest. Another common way is for the trafficker to present themselves as a parental figure to someone who is desperately seeking one. The third frequent way is they will claim they can offer a person a better life. In all three scenarios, the trafficker is preying on some type of vulnerability. That’s why it’s so important for parents to be involved in their children’s lives, and if you’re a kid, to find a parent or adult you trust, and let them know what’s going on in your life.

“If I’m speaking to parents I would say ask your kid questions. See how their day is going. Make sure you understand what they’re doing online,” Powell explained. “Also be wary, and teach your kids to ask questions and be careful online because so many of these traffickers pretend to be a young, cute boy and they have a fake profile but instead it’s an older man who’s a trafficker.”

It’s also important for adults in our communities to learn about human trafficking and to recognize what to look out for. If you see someone who looks like they’re in trouble or something that doesn’t look right, call the human trafficking hotline or the police.

Every story has a pivot point where a potential trafficking victim can make two different choices with two alternative endings. The first story in the series is called “Superstar,” in which an aspiring adolescent singer named Lacey becomes a target for human traffickers. Both of her parents work late, and she spends a lot of time online talking with friends. An older man named Erik notices one of her photos on social media and lures her to a different city by offering to make a demo tape for her. Once she arrives, he gives her a few promiscuous outfits to try on and also offers her some marijuana. She misses the last bus home, and Erik offers to let her stay at his place.

Lacey is scared her parents will be angry, so she spends the night. The next day, Erik tells her that if his friend likes her he can offer her a record contract on the spot. The audition is in a hotel room, and she’s told she’ll be offered a deal if she lets Erik’s friend touch her. Five more men enter the room, and she is dragged into the world of human trafficking.

In the second, alternative ending Lacey is suspicious when Erik reaches out to her. She calls her aunt Tereza, who tells her that nobody offers to make someone famous without wanting something in return. Instead, Lacey auditions for the school chorus and is told that she has a lot of potential. Lacey appreciates the instructor’s help, and her aunt tells her she’s becoming a better singer because of her hard work and that she’s proud of her. Lacey eventually performs, and her aunt Tereza tells her how amazing she was and the two go out to dinner to celebrate.

“Superstar” touches on one theme of human trafficking, which is the vulnerability of adolescents who have big dreams. Though traffickers prey on these girls and boys, they have the ability to fight back.

The next story in the series will feature labor trafficking, with the vulnerable character being an undocumented immigrant from Juarez, Mexico. Human traffickers promise her a better life, but she ends up as an unseen housekeeper in a hotel with no way out. The alternative ending involves another young person realizing something is off about the young woman and helps her escape. The message is that not only can young people be preyed upon by traffickers, they also have agency and the ability to fight against it.

There will be eight to 12 other stories touching on different types of human trafficking, and how they affect different kinds of vulnerable targets. Each story will feature a different theme such as immigration, sexuality, race, and economics. In some instances, the trafficker may try to manipulate a survivor into participating in trafficking.

The series was partially informed by activists, trafficking survivors, and even former traffickers. Goldman was able to hear a variety of different perspectives and learn more about human trafficking.

“I think that comics are a really sneaky way to educate people because it looks like entertainment,” Goldman explained. “Really what you’re doing while you’re reading these things and you’re having fun with it is you’re actually receiving and processing information, and if the comics are well done you’re having an emotional experience as well … you’re not the same at the end.”