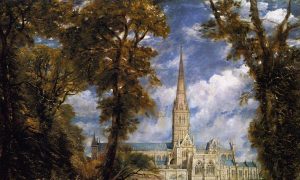 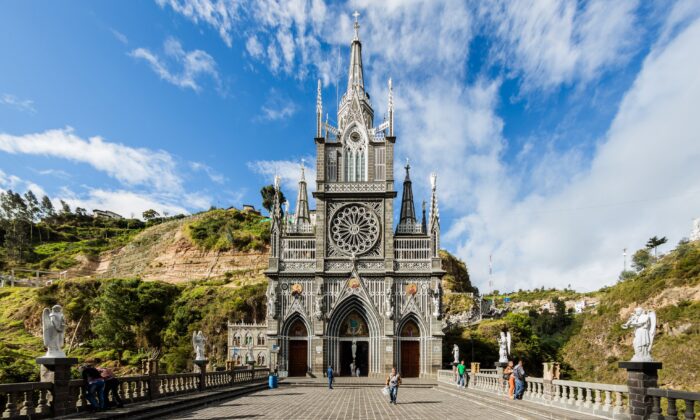 It is 1754. A violent storm erupts over Ipiales in south Colombia, just seven miles shy of Ecuador. Amerindian Maria Meneses de Quiñones and her deaf-mute daughter Rosa frantically search for shelter, having been caught out in a canyon. Finding a suitable space, the two huddle together between two “laja,” two slabs of flat rock similar to shale or slate.

Suddenly, Rosa points to the wall and shouts, “The Mestiza is calling me.” She’d seen a vision of the Virgin Mary and was pointing to her image.

The mother and daughter told no one of the Virgin Mary’s appearance or Rosa’s miraculous recovery.

When Rosa died, Maria went to the site where her daughter had seen the Virgin Mary and prayed. Then came an astounding miracle: The Virgin Mary brought Rosa back to life.

Rosa and Maria couldn’t keep that a secret. When Maria went back to the site of the miracle to show others, she noticed, for the first time, a beautiful picture of the Virgin Mary holding Christ in her arms.

The Holy Mother and Child are flanked by St. Dominic and St. Francis. To this day, the origin of the image is unknown.

From around 1756, a shrine has marked the spot where these miracles took place. The first shrine was said to have been made of straw and wood. In 1802, a larger shrine was built in its place. The Gothic-style shrine we see today—rising 330 feet from the canyon floor—was built over time, between 1916 and 1949.

In 1994, the Vatican named the shrine a minor basilica. Pilgrims visiting the National Shrine Basilica of Our Lady of Las Lajas, commonly known as Las Lajas Shrine, pay their respects and perhaps hope for a miracle.