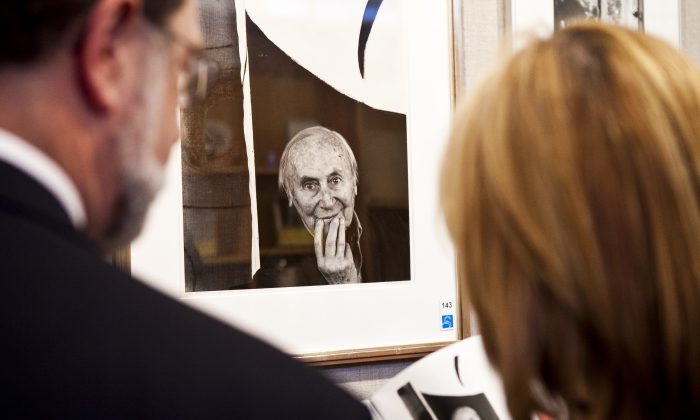 NEW YORK—Swann Auction Galleries’ upcoming April 18 sale of fine photographs and photo books made a fine excuse for a Monday night schmooze, lubricated by cocktails. Guests chatted with each other and scrutinized walls full of prints, which were the main event.

The 301 prints on sale were displayed without labels, but that didn’t faze more seasoned photography collectors. Many rattled off photographers’ names as if they were close friends (some were) or as if they were aiming for a point on a trivia show. Others methodically studied the sale catalog, and others took a more observational approach, letting themselves get absorbed in the images.

Novices and Veterans
Edward Meyers spent 50 years as a magazine photographer and a writer about photography, working for Modern Photography and Popular Photography at points in his career. He collects photos of Ralph Hattersley, a teacher of photography, who, he said, is under appreciated.

“Everyone studied with him. He was a great person,” Meyers said.

Suzanne Vlamis, who was an Associated Press photographer and photo editor for over 30 years, hasn’t given up her love of documentary photography.

“In essence, documentary photography is the witness to our times,” she said. “It invariably has a historical hook of an era, a movement in culture that impacts society. It documents the human spirit in relation to the land, the environment, or the home. It’s not advertising photography; it’s not glamor photography; it’s journalistic.”

Now she’s documenting vanishing species, such as polar bears and blue whales, and the native peoples whose lives are being impacted by environmental changes.

Eyes fixed on a wall of prints, Jason Tornow is looking to build a collection of architectural photographs. “I like the industrial aspects,” he said. Hopefully while perusing, he ran into Stan Ries, a photographer who collects and deals primarily architectural and engineering photos.

“I’m not into models and Marilyn Monroe and that kind of thing. I like buildings,” Ries said.

Ries was the official photographer for Battery Park City for almost 20 years. He shot several times with a camera stabilizer over Lower Manhattan in a helicopter. The resulting long horizontal photos are in display in the Battery Park City offices.

“There used to be a maxim, ‘Before digital, a photo never lies,’” Ries said. “You can’t say that anymore because any photo can be manipulated.”

Ries has converted to shooting digital, but knows that collecting is still very much centered on rare and original silver gelatin prints, and black and white prints especially.

“What people don’t realize is, photography is still the best way to start collecting art because it’s still reasonable. Even the great masters, they’re not a million dollars; they’re $10,000. Some of mine—the architectural photographers—they’re $5,000 because they haven’t been discovered yet.”

In a world inundated with easy images (thank you Instagram, tumblr, Flickr, and the rest) we may be skeptical of placing photography in the exalted category of fine art. That may be because dime-a-dozen cell phone photos have reduced the common conception of photography to “point, click a dozen times, sift, select, manipulate, and share.”

We can easily forget that fine art principles of composition, color, contrast, and light. A fine art photographer gives birth to the creative impetus for an image, develops technical skills involved in camera work, and navigates the crucial element of timing, which is a lesser factor in painting or sculpture.

Taking fine art photographs requires a great deal of legwork—traveling to a location or setting up a group of objects, framing and re-framing, and waiting for the right moment to hit the trigger. Making prints is another art in and of itself and involves a series of creative decisions by the artist.