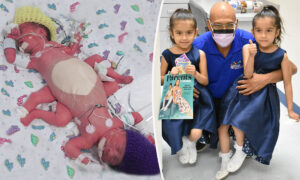 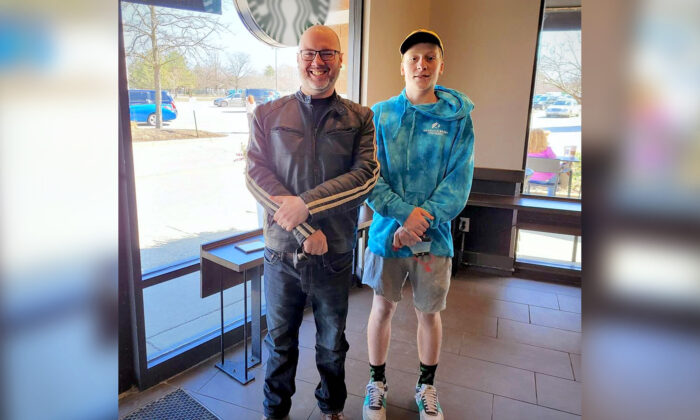 An Illinois teen who was born in a Starbucks bathroom 18 years ago had a heartwarming reunion with the barista who helped his mom give birth.

At the Starbucks in West Edens Plaza in Wilmette last month, Jonathan Celner was reunited with Griffin Baron, who was a 21-year-old Starbucks manager on the day Jonathan’s mother went into labor at the establishment.

“I heard high-pitched screams coming through the wall and thought someone had locked themselves in the bathroom,” Griffin told The Record Northshore, explaining that he had been on break around 5 p.m. on that fated day in 2002.

After arriving on the scene, Griffin asked a customer, Tricia Monico, to go into the bathroom and see what was going on. What she reported was nothing like what he’d imagined.

“When Tricia came out her face was white and she said, ‘Call 911,’” recalled Griffin. “Then she said, ‘This lady is having a baby.’”

After calling 911, Griffin said he grabbed some hot towels, saying, “because that’s what I think you do.” He then opened the bathroom door to find Lisabeth Rohlck, Jonathan’s mom, gripping the bathroom rails with one hand, and holding onto Trisha with the other.

Lisabeth was 37 weeks pregnant and had been driving when she felt pain in her side. Starbucks just happened to be the closest place with a bathroom.

The rest happened in a blur.

EMTs arrived on the scene not long afterward, to hear Griffin calling, “Get the hell in here and cut this cord!”

It was a moment Griffin would never forget; but until March 21, 2021, he never saw Lisabeth or Jonathan again.

“I had always wanted to know what happened to him,” Griffin said, adding that the reunion was “a big smile moment” for him.

After a Google search a few years ago, Griffin learned that Jonathan had since lost both of his parents—his mother to cancer, and his father to a heart condition.

“I went on GoFundMe and donated for the two kids and wrote in the memo box that I had wanted to talk to the family and give them my perspective on that day,” Griffin said.

Eventually, Jonathan’s aunt got in touch with Griffin and helped him find her nephew.

After finally meeting Jonathan, Griffin says they talked for about an hour.

The Starbucks manager introduced the 18-year-old to the baristas at his store and shared the story of Jonathan’s birth with those on duty.

Of his birth, Jonathan said he grew up knowing about the circumstances surrounding his birth and wondering about the people who had assisted his mom.

“[My mom] would always tell me the story and would say how insane those next few weeks were for her—just a total media circus,” the Oakton Community College student told Good Morning America. “When Griffin reached out, it came full circle, which was cool.”

According to GMA, Jonathan’s story is so well known that he sometimes receives a free Starbucks drink on his birthday if he shares his story with the baristas.

“He is a super cool kid,” Griffin told The Record of their meeting. “He didn’t know a lot of the insanity of what it was like. It was good to finally fill in all these holes that we had.”