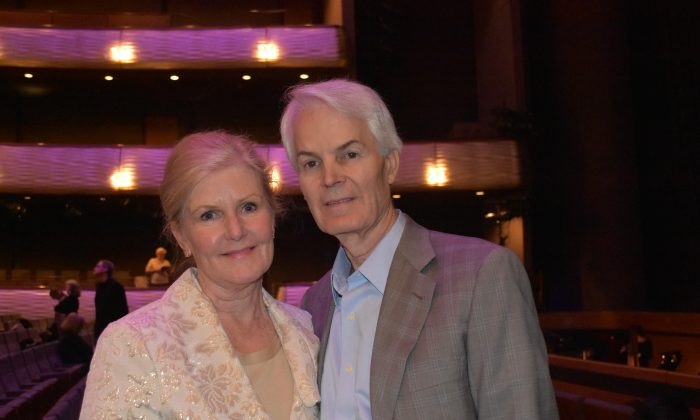 DALLAS—Shen Yun Performing Arts tells stories from China’s sprawling 5,000-year history through classical Chinese dance. Audiences are transported to stories from different dynasties and locations, with the help of a 3-D background that brings the stage to life.

Physician and co-founder of popular skincare line Beautybio, Dr. Terry James, enjoyed the integration of the dance pieces with the digital backdrop.

James added that the colors and dance movements also stood out to him.

The doctor attended the performance with his wife, Dorris, at the Dallas AT&T Performing Arts Center–Winspear Opera House on Jan. 24. Shen Yun Performing Arts is currently amidst its 2019 world tour, with six equal-sized companies stopping off at 130 cities around the world.

Shen Yun’s mission is to revive traditional Chinese civilization through music, dance, and story-telling. It draws on classic tales from its vast history that encapsulate the values and virtues central to the culture. These include belief in Heaven or the divine, living in harmony with Heaven and Earth, and divine retribution.

James in particular enjoyed the stories that drew upon the ancient Chinese belief of the Creator. In the opening act, the Creator asks the multitude of gods to descend to Earth with him to spread righteousness in the realm of mortals.

In addition, James was impressed by the dancers’ ability to project a range of emotions, from funny, to sad, to triumph, adding another layer of depth to the story-telling.

Dorris also applauded the messages found in the stories, which conveyed morals and values and faith in higher beings.

“I think we could use more of that,” she said.

Shen Yun does not only perform stories from ancient times, it also depicts scenes from modern-day China relating to the persecution of spiritual discipline Falun Dafa, also known as Falun Gong.

This stood out to James, and led him to reflect on the strength of the human spirit.

“I think there is a inner spirit in all of us, that believes in higher power,” he said.

Falun Dafa is a meditation practice that includes ancient teachings centered around the principles Truthfulness, Compassion and Tolerance. After gaining significant popularity in the 1990s, with approximately 70 million practicing by the end of the decade, the practice was banned in 1999 in a far-reaching crackdown launched by the Chinese Communist Party. The persecution has led to practitioners being arrested, sent to prisons, labor camps, and brainwashing centers, tortured, and even killed. It still continues to this day.

But the performance ultimately shows hope.

James said, “And so even though we may try to push that out of human mind and conscious, it just never dies. So that’s difficult to extinguish that.”

“And I think that still lives [within] Chinese people today.”