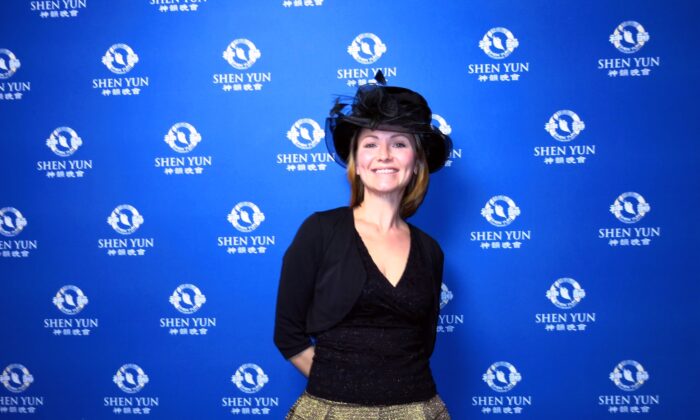 Singer Holly Prather at the Shen Yun performance at The State Theatre at Playhouse Square, Cleveland, Ohio on Feb. 5, 2022. (NTD)

CLEVELAND, Ohio—Singer Holly Prather entertains veterans around the Cleveland area and is a graduate of operatic vocal training at Baldwin Wallace College. Having seen the rejuvenating effect of music on her elderly audience, Prather recognizes the healing power of Shen Yun which she watched on Saturday.

Prather said that with the movement of beauty and music combined, it “can move people in ways that they don’t even understand themselves, but it’s opening their higher consciousness and creating a mass consciousness even when they don’t know it as an audience. And so definitely, you bring it around the world, and you can help create change in ways that people don’t understand.”

Shen Yun has been touring the world since 2006, creating new programs every year from its home in New York state. Its mission is to revive the 5,000 years of divinely imparted Chinese culture from before the communist era. Many of its performers are refugees of religious persecution, and Shen Yun‘s program touches upon these realities.

“Knowing that that kind of stuff is still going on today is just tragic,” said Prather. “I’m glad [America] is a stage for awakening, and renewing a past that has been lost.”

Pianist Moss Stanley is the bandleader for a popular local band called Nitebridge, founded in the ’80s. Having grown up outside of London with music as his companion, Moss has also served as a musical director for Broadway musicals.

He took the night off his own show to catch Shen Yun.

“Here are my thoughts in a nutshell—it’s young people who can only perform [this] show because of the dance and the movement. So for these young people, to all get together and show the world the beauty of a culture that’s much older than ours is incredible,” he said.

“All of it just flows so well together,” Stanley said. “And I could tell that the staging and the choreography and the music spent hours practicing to get it as perfect as it is, it’s just beautiful. And the athletic ability of all the dancers—incredible.”

As a musician, he said he appreciated the incredible feat of producing an all-new program each year at this level of excellence.

“It was just fun to hear all the mix of the Western and the Eastern instruments in perfect harmony. That’s how life should be,” he said of the orchestra, which blends a full Western orchestra with key Chinese instruments.

Stanley sent his praises to two musicians who particularly won his heart, one was the soloist who performed a challenging melody on the two-stringed Chinese erhu. “I know some guitar players with six strings that can’t play like that,” he said.

The other was the trombone player. “I don’t know who he was but he looked like he was 20 years old. And he’s badass trombone because he was right on it,” he said.

Stanley said that as he watched, he had “tears of happiness” come to his eyes. “And it was just pure beauty. It was just amazing,” he said.