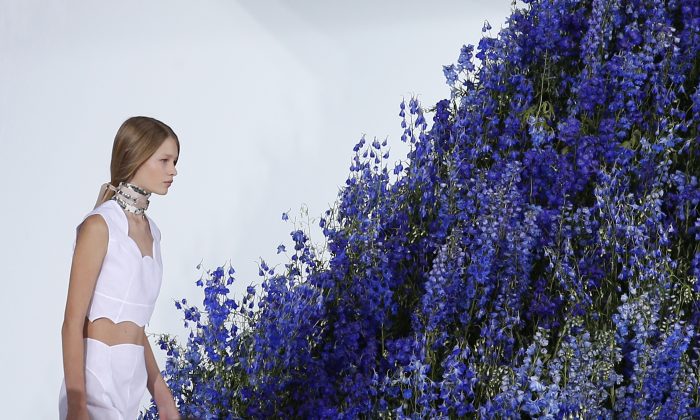 Clean Cuts From Dior and Celine at Paris Fashion Week

The delphinium flower has been associated with lightness and transcendence. Multiply that by thousands of blooms inside the oldest courtyard of the Louvre museum and that’s a lot of lightness and color. Perhaps Christian Dior designer Raf Simons was after the same visceral response from his audience upon viewing his Spring-Summer 2016 ready-to-wear fashion collection as they felt from the impressive flower installation.

Indeed what took place on the runway underscored the theme with crisply-cut cotton dresses and shorts. The scallop-edge motif carved out pretty convex and concave hemlines. The most impressive pieces were the sheer dresses that allowed for different transparencies in the fabric. It was a look that could easily translate into bridal wear. Should Simons offer such delicacies in his couture collection, it would surely spark the imagination of future brides.

Underwear as outerwear has always been a look that we’ve been visually conditioned to accept via the celebrities who adopt it, on and sometimes off stage. But as a trend, it never quite made it to the streets in the same way as say, dropped crotch pants. So it was interesting to try to anticipate where the idea will lead to when models clad in black and white lacy slips took to the runway in the Celine Spring/Summer 2016 ready-to-wear collection. But if there’s anyone who could convince women to take it up, that woman would have to be the much lauded Céline designer Phoebe Philo.

A black lace trim peaking out from under a comfy coat with voluminous shoulders and rib-knit waist makes the whole idea immediately plausible. Other great variations were shorter slips in knit worn under under a black jackets with relaxed tailoring. And who can argue with the red ankle boots?

Other unlikely yet successful combinations included empire-line blouses worn with high waist, dropped crotch pants tailored to perfection. This look, in particular, perfectly encapsulates Philo’s ethos of learning from the past yet incorporating its elements into the present not as mere citations but as reworkings for a mature aesthetic. Celine is for the woman who puts the way clothes feel first rather than as a vehicle to create tongue-and-cheek stereotypes that comment on womanhood. And it all seems effortless, clean and clear. More of that please.