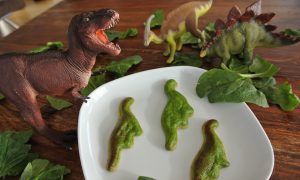 No Need to Cook, Now You Can 3D-Print Your Food
0 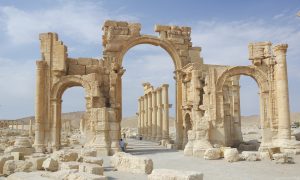 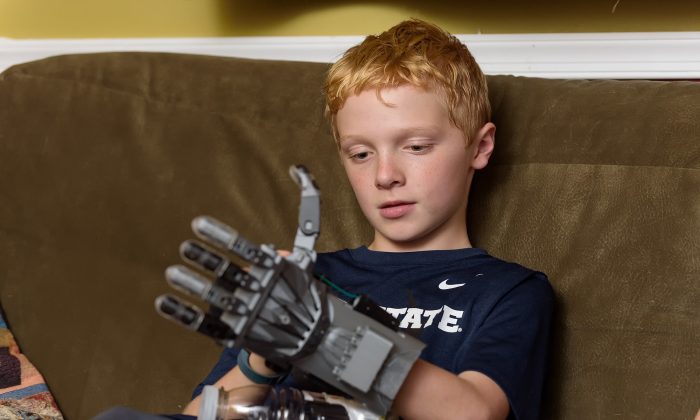 In this Oct. 22, 2015, photo, Colin Consavage, 10, of Claymont, Del., shows the prosthetic hand he made himself with a 3D printer at the local library. Colin was born with his left hand in a fist, the result of amniotic banding that kept one hand stunted. He used a 3-D printer at the Wilmington Public Library to make himself a mechanical replacement. (Doug Curran/The Wilmington News-Journal via AP)
Life & Tradition

CLAYMONT, Del.—People print all kinds of things at the library—resumes, book reports, even business plans.

Colin was born with his left hand in a fist—the result of amniotic banding that kept one hand stunted. He used a 3-D printer at the Wilmington Public Library to make himself a mechanical replacement.

One of the best things about the prosthetic hand—which is almost the size of his father’s—is that it’s bigger than his right hand, Colin said. “For nine years of my life, this hand has been smaller,” he said, opening his eyes wide and clamping the clutches of the prosthetic around his right hand. “Mwah haw haw haw—it’s payback time,” he said.

That 3-D printer is one of several in libraries across Delaware—a new addition to the “innovation spaces,” which evolved from job-placement centers that were created with federal stimulus money after the recession.

“Libraries are all about information,” said Renee O’Donnell, the librarian who helped Colin print his hand. And, she said, 3-D printers are the newest way of communicating information—they give people a way to communicate new ideas and inventions.

A $1.9 million federal grant—with a $750,000 matching grant from the Bill and Melinda Gates Foundation—paid for three years of funding for the job-placement centers, said Beth-Ann Ryan, deputy director of the Delaware Division of Libraries.

That funding started in 2011 and, by the end of it, the libraries had found that most people who were coming in to use the services were interested in building up their own ideas into businesses.

They were interested in innovating, Ryan said, so, the libraries recast their job-placement centers as “innovation spaces.”

In 10 libraries across Delaware, patrons can make the blueprints for an object and have it printed—formed in plastic—for free. They print everything from replacement parts to prototypes for new inventions.

The idea for a mechanical hand first struck Colin when he saw his mother and little brother forming the sign language word for love on a jointed plastic hand at a Maker Faire a few years ago—Maker Faires are sort of an updated version of a science fair, infused with the hip appeal of the do-it-yourself craze.

“I thought, ‘That would be cool as a glove,’ ” Colin said last week in his Claymont living room.

Last spring, after the 3-D printers arrived at the library, he and his mother, Clare Consavage, found the website for a group called e-NABLE, which has what amounts to digital patterns for prosthetic hands on the Internet.

So, they measured him up and asked the Wilmington library if they could print it there.

Although the library’s cutoff length for a printing project is five hours, O’Donnell split the project into a few sessions. It took about 12 hours to print, each finger done separately and jointed together by Clare and Colin.

The printer itself—a Maker-bot Replicator 2—is a black box that’s a little bit bigger than a toaster oven and is open on three of its four sides with a platform covered in blue painters’ tape on the bottom. The painters’ tape makes it easier to lift the projects off when they’re done.

A long, arching giraffe neck carries an electric cord and a tube that feeds in the plastic filament to the printer head, which whirs and jolts around on the platform, melting the plastic into micro-thin layers that build up from the bottom into the shape of the design.

Because the finished object is made up of layers of those plastic strings, it has ridges sort of like a clamshell and is so surprisingly light that it’s easy to pick up with too much force.

Putting all of the parts together into a hand that would clasp its fingers at the flip of his wrist took Colin and his mom about two days. When it was done—at 10 on a school night—Colin picked up a Pringles can and pitched it across the room.

He had saved the can for exactly that occasion. He hadn’t been able to pick it up before.

Colin didn’t want to take off the hand to go to bed, and the sound of his mother sanding down the pointed tips of the screws that hold it together kept him awake that night.

“He gets asked a lot about his hand at school,” Consavage said, so, having the prosthetic is empowering.

Other kids think it’s cool, Colin said. At school, “I won an arm wrestle,” he said.

Taking that as a challenge, his little brother, Riley Consavage, slid from his perch on the couch and walked to the other end of it where Colin was sitting, grasped hands with him, and put all the force of his 8-year-old self into his arm.

“Let’s not break it,” said Colin, before his hand hit the cushion.

“The nice thing is, all the parts are printable,” their mother said.

It’s not a perfect prosthetic—Colin is working with a team of engineering students at Penn State to get a more advanced version—but it has been good for him.

“For one thing, I’ve been able to pick up Pringles cans,” he said.

Earlier that day, he had wrapped a pen in paper towels and fit it into the giant grip of the printed hand and wrote: “Hi.” And, “It’s working.”

His mom often says that they’re “unlucky, but lucky,” since he was born with one small hand, but it’s his left one and he’s right-handed.

Colin likes to draw and has invented two characters: one called Super Bob and one called Repus Bob, who is the opposite of Super Bob—his name spelled backwards. Colin also draws a tap-dancing walrus that wears a top hat and carries a cane.

Paulo Arratia, an associate professor of engineering at the University of Pennsylvania says 3-D printers are the “democratization of the making process.”

Putting them in libraries, he says—”what a wonderful idea . allowing the public to tinker, to play.”

Arratia uses the printers—more sophisticated versions than the ones available at the public library—for research. Right now he’s working on a project that would, as he describes it, put a chemistry lab on a chip. A tiny, easy-to-carry chip would have everything necessary to detect malaria from a small drop of blood or saliva, he said.

Some labs are working on printing human tissue and industries are starting to use 3-D printing technology in day-to-day operations—the Federal Aviation Administration has approved of the use of some airplane components made with 3-D printers and is working on guidelines.

On the consumer end of the spectrum, printers that make food might not be terribly far off. Nestlé is tinkering with the idea right now, said Arratia, who has tried eating a printed pretzel. It tasted like a pretzel, he said.

He likened 3-D printers to microwaves—a few decades ago, people didn’t think that they’d be in every kitchen and now they’re a standard feature. He gives it about 10 years until 3-D printers are common in homes.

They aren’t likely to replace large-scale manufacturing—they aren’t nearly as efficient—Arratia said, explaining that one of the things they’ll be most useful for is making replacement parts. He summed it up this way: We’ll still need to manufacture cars, but 3-D printing will allow us to make a part for the car.

The director of the Lewes Public Library, Ed Goyda, did just that with one of his first projects on the library’s printer. Part of a toilet-paper dispenser at the library broke, and the company that made it didn’t sell a replacement part—the library would have to buy a whole new dispenser.

“It’s a simple cylinder,” Goyda said of the part that broke. So, he measured it out and printed a new one—in red. It’s been in use ever since.

The printer in Lewes usually runs for about five hours a day, Goyda said, and a number of people have come in with plans to print replacement parts.

“Children love to watch thing-bot work,” he said—they’ll stand, mesmerized, watching as it works diligently along, building up a chess piece or Christmas ornament one-tenth of a millimeter at a time.

“For me, it reminds me of the replicator in ‘Star Trek’—make me a cup of tea, please,” O’Donnell said as she gave a class recently in the Wilmington Inspiration Space, tipping her shoulder toward the printer like it’s a hat.

“Well, here’s the start of at least making the mug,” she said.