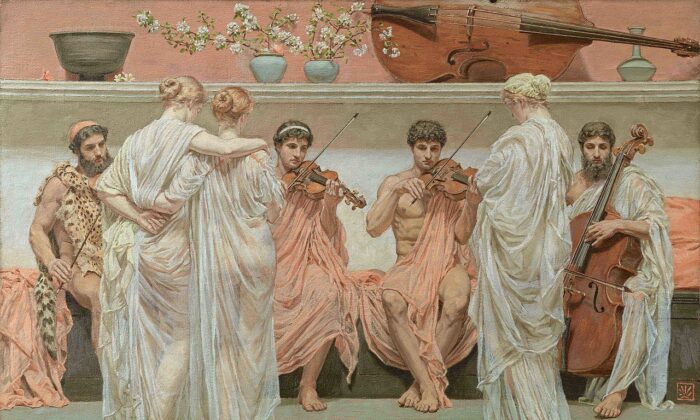 Are we living now in a “classical” or a “romantic” musical era? I mean with a small C and a small R. The question may sound rather reductive in today’s complex musical world, but art, literature, and music history have long been understood in terms of those two essential elements: intellect versus heart, reason versus emotion, Apollonian versus Dionysian.

Romantic music, for example Tchaikovsky’s, is understood generally to have bigger, emotional melodies and temperamental changes in tempo and volume. Classical music, for example Mozart’s, flows along relatively evenly, is balanced, and is dispassionately predictable.

In reality, the aesthetic winds that bluster through music history have always formed a rather more hopeless complexity of crosscurrents, but historians have nonetheless found this simple dichotomy between reason and emotion useful in understanding at least the main trade-wind routes music has sailed on its way through time.

The Pendulum of the Romantic and Classical in Music History

Let me first take you on a whirlwind (or trade-wind) tour of this essential path through the history of Western classical music. It amounts to this: Each traditional historical era of music began with relatively “classical” simplicity and symmetry, and then gradually grew into a more impulsive, emotional “romantic” beast, until it was brought under control once again by a new simplification, to begin the next era of restored classical stability.

For example, the high Renaissance in music (late 16th century) had grown into a gorgon of emotional complexity with many voices singing different lines at once (“polyphony”), sometimes on completely different texts in different languages! Then around 1600, the early Baroque composers, like Claudio Monteverdi (1567–1643), clarified this confusing state of music by returning to a single voice in a type of song called “monody,” a term borrowed from classical Greek poetry declaimed by a single person rather than by a chorus.

Over time, though, the Baroque couldn’t help itself and also grew in complexity into many more or bigger parts. For example, we see this in the imitative fugues of Bach and in spectacularly sumptuous choral oratorios, showy organ music, and brassy brass ensembles.

A new reform was found in the next, so-called Classical (with both a large and a small C) era typified by Mozart and Haydn, beginning with a radical simplification of the Baroque’s opera aria, which had become a show-off vehicle of convoluted vocal improvisation. A landmark work here was the classical Greek-themed opera “Orfeo ed Euridice” (1762) by Christoph Willibald Gluck (1714–1787). It radically disallowed any improvisation, in strict adherence to the notes on the page, and those had relatively simple melodies, thus clarifying the romantic muddle back into tidy classical order.

The next swing of the pendulum from classical back to romantic took us all the way through the Classical era and growing continually into the late Romantic era of Gustav Mahler and Richard Strauss, with their version of emotionally extravagant instrumental forces and harmonic complexities. Then, in the 1920s, a cerebral course correction in music was again made, this time by Arnold Schoenberg (1874–1951) with his atonal, ultra-rational “twelve-tone method,” rendering emotion practically taboo for decades.

This incarnation of classicism, in turn, has grown back into today’s neoromantic, emotional roller coaster of postmodern collages, mixing all sorts of styles, often at once, as in the work of William Bolcom and Michael Daugherty.

However, the above recycling process in the “closed system” of concert-hall music history has now had its bubble burst by the explosion of popular, world, media, and hybrid musical styles. The fallout lies scattered all about us in a now-open system, though it may feel more like a terrifying mess to the scholar preferring neat models. Yet human emotion and reason remain, and they need to be sorted out in some way.

Has Our Culture Become More ‘Romantic’?

In the above cases, space did not permit discussing how all these changes in music reflected similar movements in art, literature, and culture (they did), so let us look at culture now for some help in understanding today’s music.

My observation in recent years, at least as a college professor, has been of the dramatic rise of emotion and “feelings” over reason. Last year a student wrote to me, “Why did you give me a B in the course? I feel like I earned an A.” I replied, “Alas, I cannot grade on your feelings. You had an 87 average.”

The Romantic age has clearly returned in popular film and TV, whose moral compass is often feelings. And in a few cases, heart-on-the-sleeve melodrama has even swelled into brick-through-the-window angst, as raw emotion has burst out into the streets irrationally, in that some do not even seem to know why they are engaging in it or even why they are feeling it.

Even the most passionate music of Wagner or Tchaikovsky would not seem to contain or register this much feeling on its emotion meter. In the light of today’s more visceral emotions, it becomes easier to see that such 19th-century romantic music, previously thought to be wildly unbridled in emotion, was actually constructed in a rational way. It was never pure emotion only, as it sometimes seemed, but rather only a more malleable version of classical music. Though leaning further into emotional expression, it was still a combination of both emotion and reason. Tchaikovsky’s music owes plenty to Mozart’s and has plenty of classical form!

Perhaps the only true musical counterpart to the kind of emotion society is experiencing now would be a music of pure chaos. And just as rampant emotion without reason can become rage and destroy a city, so would it seem that pure emotion alone would become noise and destroy music.

Thus, it appears impossible for “classical” and “romantic” to exist without each other, as with yin and yang. We see that for the arts to survive, as with culture in general, they must remain as they always have been, a balancing act between the two human impulses of intellect and emotion.