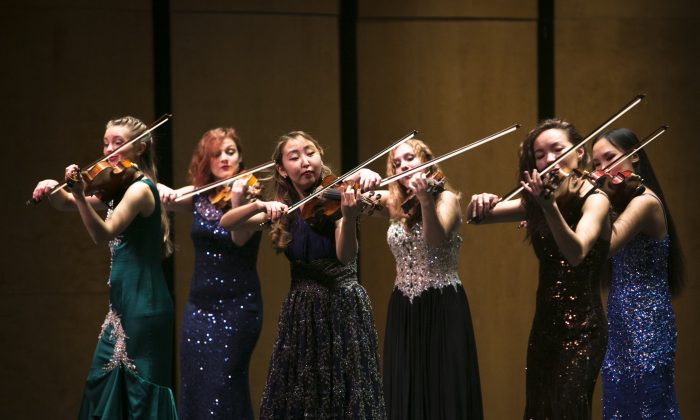 Classical Music Producer Leonid Fleishaker: The Classics Lead Us to See the Colors of Life

Accompanied by a pianist, 11 violinists in formal evening attire (only two of them men) stood across the stage and bodily engaged with the music as they played. The concert on Oct. 23 at Brooklyn’s Kingsborough Community College by the ensemble Siberian Virtuosi included repertoire from Johann Sebastian Bach to Astor Piazzolla, and so precise was the playing, it sounded at times like one stringed instrument.

According to Leonid Fleishaker, who as president of World Touring LLC manages the group, the ensemble’s performance nearly always brings the audience to its feet at concert’s end and then the musicians accommodate the enthusiastic response with an encore.

Fleishaker notes that the wide range of classical music is just one of the attributes that makes the ensemble from the Sakha Republic (Yakutia) unique. It’s not a chamber orchestra, which is typically smaller than a full orchestra but contains a variety of instruments—Siberian Virtuosi has only two. They don’t sit in front of sheet music—the repertoire is memorized. It’s not a contemporary ensemble—they play mostly traditional pieces, but the arrangements for violin and piano are original.

Founded in 1994, Siberian Virtuosi is led by directors Larisa Gabysheva and Stanislav Afanasenko. The ensemble has garnered many international awards, including an International Festival Competition in St. Petersburg, Russia; “Music Week of Tours” in France; the Grand Prix at a festival in Cremona, Italy, as well as at a festival in Miskolc, Hungary.

In addition to these countries, they have toured Italy, Israel, the United Kingdom, Austria, Portugal, the Ukraine, China, Germany, Croatia, and South Korea. In 2012 they presented 20 concerts in the United States for the first time, Fleishaker explained, before they journeyed to South America for a sold-out series of concerts there. Last December they played at Carnegie Hall, and they are currently in the middle of another North American tour.

Despite their successes, Fleishaker is concerned for the group—at least in the United States. As he explained on Oct. 24, he’s concerned for classical music as a whole.

As a professional violinist turned manager, Fleishaker speaks from close vantage about the inner workings of the professional music world. In the last 5–10 years, he says, interest in classical music has declined in the United States.

One factor contributing to the decline is that the way venues operate has changed. Previously, executive directors of performing arts centers had control of decision making. If they liked a group, they simply would sign up that ensemble as the calendar allowed. These directors have retired or moved on.

Their replacements no longer control the roster of artists appearing in venues. The new directors must submit a proposal to a board, which ultimately makes the decision. Thus, the director’s enthusiasm must be able to sway a group who may not have expertise in the arts, who may only see the bottom dollar, or who may have their own artistic agendas.

And, if the board contains members of the younger generation, who, given changes in education over the years, have little exposure to the fine arts, classical groups may not be seen as a high priority, he said.

In any case, it’s no longer a simple process for classical performing artists to secure performance dates.

This new booking system is not to the advantage of the arts. For one thing, it forces artists to find ever-increasing ways to market themselves as unique entities. For another, if artists don’t find venues, they won’t be able to perform for the public, and if these traditional works are not presented, they will disappear.

Classics: Our Bridges to the Past

“If you don’t present classical ballet, if you don’t see ‘Swan Lake’ being performed, people will forget about it,” Fleishaker said. Once people forget the old works, museums, concerts halls, and venues for the classics will be replaced “by arenas for 50,000 people to see rock-and-roll stars or pop singers.”

This loss, the diminishing access to the classics, is happening very fast, he said. In very short order, we’ve moved, for example, in photography from film to digital photography and now to omnipresent iPhones and apps.

People who haven’t seen this transition, who have only known iPhones, lose perspective. In order to have perspective, you need at least two points of view. By seeing where we were in the past, and seeing the line from the past to the present, we can visualize a trajectory beyond to the future.

This is true of all the classics, he said. Without them, the young cannot compare then and now to gain perspective.

He’s particularly concerned about how growing up without access to the classics will impact the younger generations. For this reason, Fleishaker’s company uses some of the proceeds from paid concerts to support music outreach to elementary schools. He wants youngsters to regain the perspective that past generations always had of knowing their own culture’s past.

“The classics are bridges between the past and the present and should not be burned,” he said.

The Colors of Life

“Why is it important to remember the works of Shakespeare, Tolstoy, Dostoyevsky?” Fleishaker asked.

These are our cultural treasures. “Call me traditional or old-fashioned, but these works make people richer inside. You learn how to explain your thoughts; you can appreciate life.”

Consider that we use a lot of popular music—popular versus classical—as a background to life, he said. We call it elevator music, and we also jog or exercise to music that we don’t pay much attention to.

But classical music grips us, takes us away and engages us. “It lets you imagine; it can make you think, laugh, feel,” he said.

When he listens to Ravel, Debussy, Tchaikovsky, or Beethoven’s “Moonlight Sonata,” he experiences a scene that the composer intended.

Bach, for example, who composed for the church, has a certain intended effect. The “music of Bach always transferred me to a house of God,” Fleishaker said.

The classic arts, he says, allow us to see life through different lenses for each of the artists we are exposed to. Listening to classical music by composers of varying eras and from different countries allows us to understand the way things once were, the way people from different countries see things: “This thought can relate to knowing different languages; the more languages you know, the more times you are a human being.”

In sum, the richness of these perspectives helps us see the colors of life. When you learn about the composers, when you experience in your imagination what they intend for you to experience, “you understand that things around you are not just black and white. Everything we look at has colors. We just need to learn how to interpret them and understand.”

Seeing colors is important for the soul, he said.

Samira Bouaou in New York contributed to this report.